Concrete Vapor Barriers - What Are They? 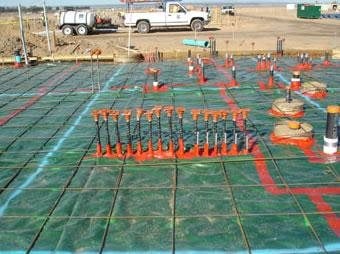 The last thing you want your customers to envision when thinking of a concrete floor is a damp, cold basement slab. One of the reasons those old basement floors were like that was because they had no vapor barrier beneath them, leaving an easy path for water vapor from the soil to migrate into the slab, assuring that the cold clammy damp feeling never went away.

And dampness is only part of the problem, water vapor moving through a concrete floor can:

But it doesn't have to be that way. On new interior slabs, moisture can be easily controlled and mostly eliminated. Here is information to help you understand how moisture moves in a slab and how using a vapor barrier can help control the problem.

Read more about moisture coming up through concrete, including how to test for moisture vapor transmission.

What are Vapor Barriers?

All of the problems associated with moisture vapor movement in a concrete slab will go away in time as the slab dries, as long as there is no source of additional water into the slab. Since the most common source is moisture in the ground beneath the slab, the solution is to completely take the ground out of the equation, by sealing the bottom of the slab.

Find out where to buy vapor barriers and other problem solving products.

The best way to accomplish that is with a vapor barrier under the slab. Vapor retarders have been used since the 1950s. Recently, though, research has shown that the old traditional layer of 6-mil Visqueen (polyethylene plastic) under the slab is seldom effective for two main reasons: 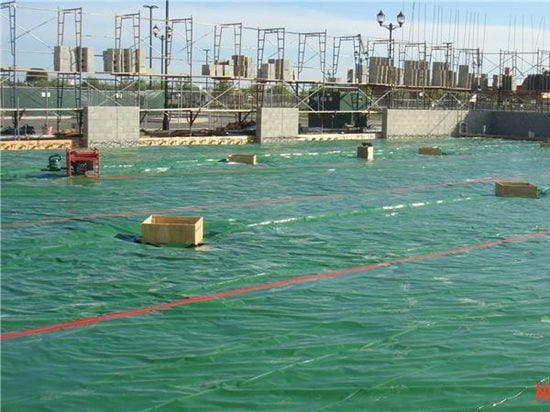 Thin plastic like this is often called a vapor retarder—meaning it slows the vapor down but doesn't stop it. A much better approach is a true vapor barrier, with characteristics that conform to the requirements of ASTM E-1745, "Standard Specification for Water Vapor Retarders Used in Contact with Soil or Granular Fill under Concrete Slabs." This specification has three classes of vapor retarders (or barriers--the terms are still often used interchangeably), Class A, B, and C.

For all three classes of vapor retarder, the permeance (a measure of how much vapor can pass through) must be less than 0.3 perms. Most experts today don't think that's low enough, and a few materials have recently become available that have permeance values less than 0.03 perms—some as low as 0.01. These low permeability materials completely eliminate any moisture migration from the ground, allowing the slab to dry out much more quickly and to stay dry. ACI 302.2R-06, Guide for Concrete Floors that Receive Moisture-Sensitive Flooring Materials, estimates that concrete with a w/c of 0.5 will dry to an MVER of 3 pounds/1000 sq. ft/24 hours in 82 days with a vapor barrier, compared to 144 days when exposed to vapor from below.

The other characteristic of a good vapor barrier that makes it effective is resistance to punctures and tears. ACI 302.1, Guide for Concrete Floor and Slab Construction, states that the minimum thickness of an effective vapor barrier is 10 mils. This was verfied by some field studies conducted by Concrete Construction magazine. Thinner plastic can't stand up to the abuse of construction. ASTM E-1745 specifies minimum values for tensile strength and puncture resistance that increase from Class C to Class A.

A 10-mil vapor barrier may be sufficient for residential construction in terms of puncture resistance, although the 10-mil barriers can't completely isolate the slab from ground moisture. The newer very low permeability barriers, such as those from W. R. MEADOWS, Fortifiber, Interwrap, Raven, Reef, Polyguard, Stego, Grace Construction Products, Strata Systems, and Layfield are 15 mils (15 thousandths of an inch) or greater. This thicker material is much less susceptible to tears or punctures and has a lower permeance. 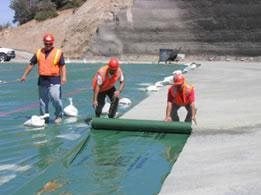 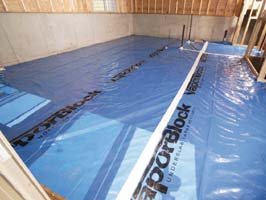