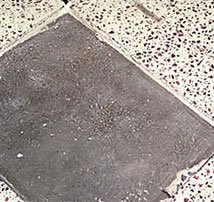 Coating concrete with impermeable coatings or other floor surfacings that do not breathe requires special considerations to prevent failure. When protective coatings are applied to steel substrates, there are basic rules to follow to assure good adhesion throughout service life. Clearly defined standards for surface preparation and cleanliness of steel have been established so coating adhesion and performance are predictable.

With concrete surfaces, however, each slab has its own chemistry and profile of performance. It is this variance in concrete formula, placement, finishing, curing, and subsoil conditions that makes predictability of coating adhesion very elusive. This article will outline steps to avoid bond failures not associated with surface preparation. We are assuming that good preparation is well established and that concrete surfaces are cleaned properly and well profiled (roughened) for maximum surface area and good adhesion. Surface preparation methods are well outlined in the ICRI Technical Guideline No. 03732, Selecting and Specifying Concrete Surface Preparation for Sealers, Coatings, and Polymer Overlays. 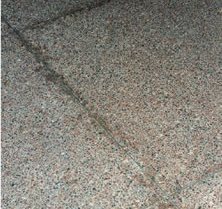 Photos #1 and #2 show the effect of moisture vapor transmission on impermeable and permeable floor systems. Photo #1 is an epoxy terrazzo surface (impermeable) which has completely lost bond and has water lying in the exposed area. Photo #2 is also a terrazzo surface, but in this case it is a permeable, cement-based system. Moisture migration is plainly visible around the panels of terrazzo defined by zinc divider strips. Moisture is transmitting along the path of least resistance, but is not affecting the bond or adhesion of the terrazzo to the concrete substrate.

There are a multitude of tests used to establish moisture content and moisture vapor transmission.1 These include the Plastic Sheet Test (ASTM-D-4263), Calcium Chloride Test, Gravimetric Testing, Radio Frequency Test, Nuclear Density, and Electro-conductive Testing (moisture meter). Most of these tests are designed to determine the moisture content or locate areas of excessive moisture. Only two, however, determine the transmission of moisture.

The Plastic Sheet Test2 (ASTM-D-4263) will give a qualitative, wet/not wet answer and the Calcium Chloride Test3 will provide a quantitative value. The Plastic Sheet Test (ASTM-D-4263) is an eighteen inch by eighteen inch square of clear plastic sheeting that is sealed to the concrete surface with tape on all four sides. After sixteen hours, if any condensation is found on the underside of the plastic or if the concrete surface is darkened, the concrete is considered too wet. In cooler conditions, the test may not work and the reliability of the results can be influenced by differences in the temperature. An obvious appearance of moisture, however, will always indicate excessive moisture flow.

Water or, more importantly, water vapor will migrate to the surface when there is a higher vapor pressure in the concrete than in the air above the surface.4 In many cases, testing for moisture vapor transmission on new buildings is done prior to enclosing the building to allow the flooring contractor to proceed. Since the building is not enclosed, the conditions above the slab are similar to the slab itself and there is little moisture attraction to the surface and the test reads dry. When the building is enclosed, the air conditioning lowers the humidity and the temperature which lowers the vapor pressure causing a gradient and creating a vapor drive.

The best way to control moisture transmission is right at the beginning, from the sub-soil to the concrete placement. When installing slabs-ongrade that are to receive an impermeable nonbreathing) coating or surfacing, an efficient vapor barrier must be used. We must recognize that adhesion problems caused by moisture transmission are not confined to epoxy or epoxy adhesion to concrete. Any non-breathing film (rubber tile, sheet goods, etc.) will react in the same manner.

The placement of a vapor barrier is also important. American Concrete Institute (ACI) is vague about the ground moisture conditions requiring vapor barrier use. Section 302.1R-96, subsection 3.2.3 discusses the use of vapor retarders (barriers) and recommends the vapor retarder be placed under a minimum of four inches (100 mm) of compactible, granular fill (Section 4.1.5). This is done to assist in the curing of the slab.

It seems that the primary reason or installing a granular fill over a vapor barrier is to minimize plastic shrinkage cracking and to act as a bleedwater blotter. If installed in this manner (under a granular fill), it requires an extended period of time (much longer than thirty days and in some cases over a year) to dry adequately enough for an impermeable coating to be used on the surface. When using an efficient vapor barrier to control moisture vapor transmission, it should be placed directly under the slab and more efficient than six-mil poly, which is easily punctured during concrete placement.

Once the vapor barrier has been chosen and in place, a good quality concrete and good placement techniques are important. A low water to cement ratio (0.5 max), designed for high compressive strength and low permeability, are important. The configuration and structural integrity of the slab must be considered and control joints and expansion joints must be designed. A well placed and properly cured concrete slab will provide a hard, dense concrete surface of low permeability.

The following job site conditions will minimize the excessive moisture transmission of a slabon- grade:

The problem of moisture vapor transmission in concrete slabs on or below grade has been a recognized condition for many years. Called by a variety of names such as hydrostatic pressure, osmosis, and capillary action, the problem is finally being defined properly to focus on solutions short of removing the concrete slab and starting over.

There are several companies that offer warranted treatments to the surface that are aimed at reducing or eliminating the problem. These solutions, however, are quite costly. Floor coating manufacturers are also offering treatments to go under their systems for prevention of bond failure. Some treatments that have shown promise are:

Bob Cain is president of Key Resin Company, manufacturer of specialty coatings, toppings, and protective treatments for concrete surfaces. He is concurrently President of KRC Associates, consultants to architects, engineers, contractors, and manufacturers and specializing in protection of concrete and steel. Bob conducts annual seminars at the World of Concrete on coatings for concrete floors. He is a member of ICRI and served on the ICRI Board of Directors as secretary from 1991-1994. Throughout his career he has participated in and chaired many industry and government committees in the generation of national standards of industry specifications.