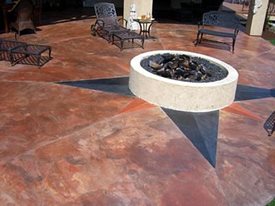 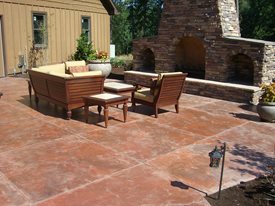 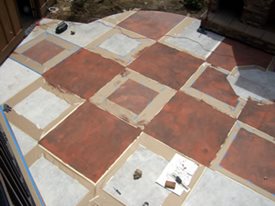 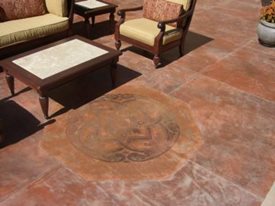 Rogers, a nationally acclaimed faux finisher and decorative concrete artisan, was chosen to install the decorative concrete in the outdoor living areas of two of the featured homes. Rogers applied his SkimStone techniques on a beautiful European Country-style home, named "Forest View." The builder, Bill Winkenbach, owner of BC Custom Homes, requested SkimStone products, and the homeowner's request was to recreate the feel and beauty of the state of Colorado in their outdoor patio. After viewing some samples Rogers created, the colors and design were set.

The home tour was scheduled to begin in a matter of days, so Rogers decided to work at night so that he could work quickly, and because of the extreme mid-July temperatures which made the concrete too hot to be troweled during the day. On a tight schedule, beginning at 6:30pm and finishing in the early morning hours, Rogers and his crew completed the two living areas, approximately 4,500 square feet, in less than 10 days.

Rogers applied a microtopping to the already poured concrete slab. For the firepit, he used three colors, Mocha, Florentine Clay and Yellowstone to design the 2,000 square foot outdoor living area. He blended the three colors in a faux finish for the large fields. Then he saw cut and taped off the points of the star around the firepit. Each star was done in two tones of the same color to add depth, interest and more detail. He used the color Deep Slate at an 8-ounce mix for the darkest black on the points and a 4-ounce mix for the lighter side. He also used the same mix ratios using the color Florentine Clay for the small points of the star.

On the other home, Rogers sawcut 5' squares into a checkerboard pattern. He taped off each square individually to get clear lines between each adding depth to the overall look. He used a custom color he created for the octagon. He then applied a Modello stencil on top, adding dimension and art to the exterior area.

Rogers currently teaches the art and secrets of his custom faux finishes, offering classes out of his two studios located in Portland and Salem. He was handpicked in 2004 to be one of twenty certified SkimStone instructors in the country. His artistic visions and innovative techniques have been recognized in many television and magazine publications. His diverse creations from wallcoverings to concrete overlays have been appreciated in a range of residential and commercial settings including restaurants, salons and business enterprises throughout the U.S.