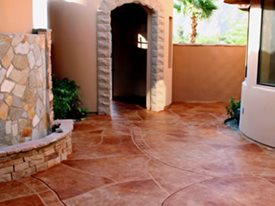 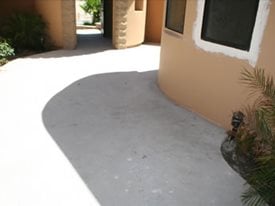 Photo of courtyard before Spektrem Concrete began their work. 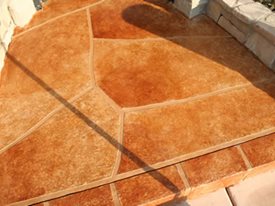 Upon first step into this desert courtyard, one admires the beautiful stone work beneath their feet. However, it turns out that they aren't standing on stones at all...in fact this look was created using decorative concrete.

On this recent project in Palm Springs, Calif., Spektrem Concrete proved the versatility and beauty of concrete. SureCrete products were used to create the look and feel of natural stone that would blend with its surroundings and great attention was given to detail, which is seen in the realistic results.

Spektrem collaborated closely with the developer of this project. This particular house was a spec house that, according to Robert Lavin, owner of Spektrem, "is worth more than two million dollars." The developer asked Lavin to create a pattern that would complement the stone fountain that was already present in the courtyard. Lavin said that "it was both a challenge and a blessing to work with such a talented developer." He noted that "it was hard at times to match his particular vision, but in the end, the project turned out amazing because the developer really pushed for perfection."

When Spektrem crews arrived at the job site they were faced with a challenge. The original slab had been poured without contraction joints and the concrete was already beginning to crack. Luckily, the problem was able to be remedied, but not without extensive surface preparation. After preparing the slab, it was time to get creative.

First, Sure Spray, a cement-based overlay from SureCrete, was applied with a trowel to the prepped slab. Spektrem chose to trowel down the overlay instead of spraying it on, as the name of the product suggests, in order to achieve a unique stone like texture. Referring to the faux grout design, Lavin explains, "Next, we saw cut the expansion joints into organic shapes to mimic the natural stone."

To create the rich colors, the concrete was hand colored using three shades. The base color was a taupe, which is now seen in the faux grout lines. Tape was used as a stencil for the grout lines, while the top coat of stain was applied. The warm red tone was created by combining two EcoStain colors, burnt crimson and safari tan. EcoStain is an eco-friendly, water-based stain from SureCrete, which Lavin chose because of its ability to be used in a manner similar to faux paint. Spektrem antiqued the two-tone top coat by hand with sponges and other tools. Finally, the job was finished with a penetrating solvent sealer.

After seeing this project, it is clear that Spektrem Concrete truly lives up to its slogan: "Transforming ordinary concrete into extraordinary surfaces." Spektrem is based out of Palm Desert, CA and is the exclusive SureCrete distributor for CA, AZ, and NV.

Get more ideas for making concrete patios look like stone