A crane and crew of seven men airlift a large custom-made concrete tub into a second-floor bathroom By Anne Balogh, ConcreteNetwork.com Columnist

When a homeowner asks you to install a concrete bathtub in an upstairs bathroom, one that's too big to fit through the doorways or up the stairwell, what's the solution? Bring it in through the bathroom window, of course.

That's exactly what Stone Soup Concrete did recently to deliver this 1,500-pound one-piece tub to its final destination, using a crane and a crew of seven men to accomplish the feat. 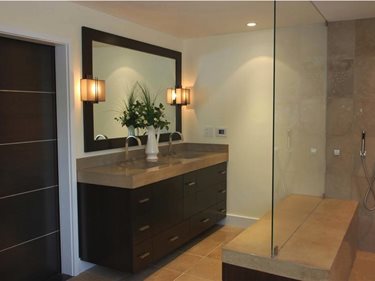 The tub was custom made by Stone Soup for the owners of a Wellesley, Mass., home built in the 1980s. The master bathroom suite on the second floor was in need of an overhaul, and the owners were keen on using concrete. They had previously refurbished a smaller bathroom in the home with concrete and liked the results.

"They were interested in using concrete for all the elements in this bathroom," says Stone Soup owner Michael Karmody. "They love its stone-like appearance, hand-made qualities and warmth." The size and weight of the concrete pieces didn't deter them, even though it meant installing additional structural framing in the wood subfloor to bear the weight.

The project was a collaborative effort involving the owners, Stone Soup, Kelley Ann Designs and Lewis Interiors (both based in Boston), and general contractor Payne/Bouchier (www.paynebouchier.com). Almost everything in the bathroom is made of concrete, including a monolithic vanity and sink, a 7-foot-long C-shaped storage unit that visually separates the shower from the rest of the bathroom, and custom concrete tiles on the floor and shower walls.

But the undeniable focal point of the room is the distinctive concrete bathtub that slopes inward on all sides, like a flat-bottomed boat. Centered right beneath the bathroom window through which it made its entry, the tub is 3 1/2 feet wide and 6 feet long. The walls are 3 inches thick.

"The shape is an interplay of weight versus weightlessness," says Karmody. "The tub is installed on a plinth, creating a shadow at the base that makes the mass appears as if it's floating. It conveys the idea of a vessel that both holds water and floats."

The bathroom has become an oasis for the homeowners, and the perfect antidote to the cold Northeast winters. In addition to the warmth conveyed by the rich color tones and texture of the concrete, the room is heated by hot water radiant heating that runs through PEX tubes installed on the subfloor beneath the concrete tiles. The concrete flooring helps to conduct the draft-free radiant heat. (Learn more about radiant floor heating.)

How the pieces were made
Stone Soup cast all the pieces, including the 16x16-inch tiles, in their shop. "We find there's a pretty big demand for custom concrete tiles," says Karmody.

When possible, Karmody likes to use environmentally friendly materials and finishes. For the elements on this project, he used VCAS from Vitro Minerals, a post-industrial fiberglass powder, as an eco-friendly cement replacement, allowing the cement content to be reduced by a quarter to a third. The warm color tones were achieved with a mix of integral iron-oxide pigments in buff, oxide red and green, added to a base of white cement. "The color variations were enhanced by the vibration process, which helped to create visual texture," says Karmody.

To finish the concrete, he applied V-Seal 101 (www.vseal.com) as a densifier on all of the pieces and then applied a semi-penetrating polymer sealer (Pro-Seal Ultra Shield II-A from Pro-Seal Products) to everything but the concrete wall and floor tiles. Both products are water-based, nontoxic, and free of VOCs.

To help retain concrete's tactile qualities, Stone Soup doesn't grind or polish their work. "I want people to feel like they're touching concrete," Karmody explains. "We are very careful in how we make our forms, so they impart the finish we want in the final piece." For the tub on this project, Stone Soup used a smooth acrylic plastic to form the bowl and laminated HDO plywood for the exterior walls.

To reinforce the bathtub and other large pieces, Stone Soup used metal wire framing, prebent and tensioned before casting, as well as alkali-resistant glass fibers from Ball Consulting in the concrete mix for crack control.

Up, up and away
It was after the pieces left the shop that the real fun began. Both the 1,500-pound tub and 1,200-pound C-shaped unit had to be carefully cushioned, cradled and crane-lifted up to the second floor of the home. "The C-section was delivered first. It acted as a dry run for the tub install," says Karmody. The piece, which just barely fit through the window, was slid down a ramp to its final resting place.

Getting the tub into the room was even trickier and required the general contractor to cut a hole into the roof and ceiling over the bathroom for the crane rigging. 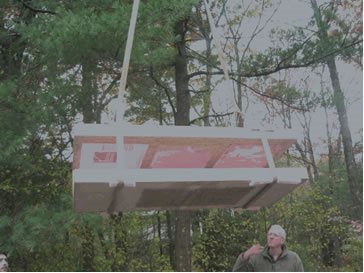 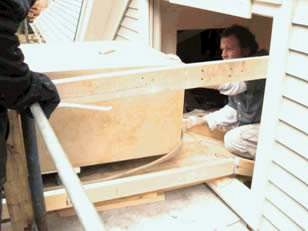 The C-shaped storage unit enters on a ramp through the bathroom window.

"The tub was delivered to the second floor using a long-sling rigging," explains Karmody. "It was then pushed through the bathroom window onto a set of scaffolding built to the height of the window opening. Next, we shortened the rigging to fit inside the room through the hole in the roof and ceiling. Then we picked the tub, removed the wheels and scaffolding, and lowered the tub into place. The entire procedure took 2 1/2 hours from the arrival of our truck to the final landing of the tub." 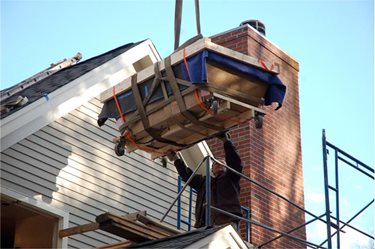 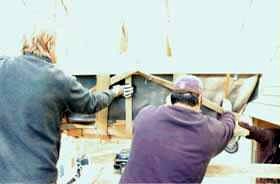 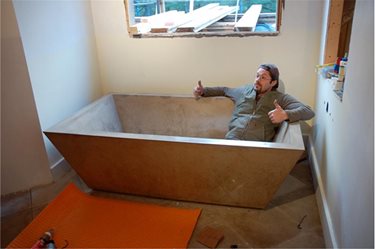 Delivery of the tub is next. Thumbs-up for a job well done!

Karmody jokes that on his most challenging projects, there comes a "moment of fruition or a lawsuit" when all the pieces are finally put into place. For this bathroom remodel, fortunately, the clients were thrilled with the results. "They love it. They are really into the idea of concrete and are talking about doing more. It's a distinctive material that's hard to pigeonhole," he says.