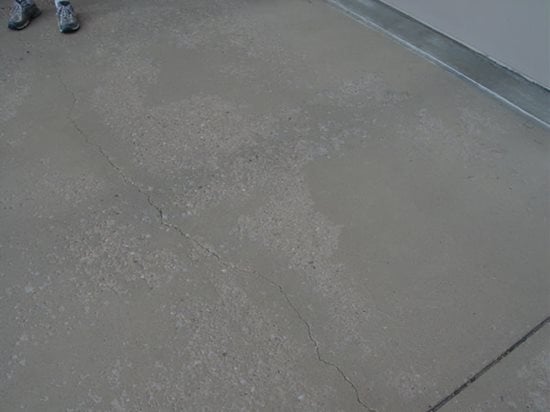 Spalling caused by freezing and thawing and deicing chemicals leaves
ugly pits in a concrete driveway.

What caused this surface failure on my integrally colored concrete driveway, and what can I do to repair it? The driveway is 6 years old and 1,000 square feet in size, but only a few hundred square feet directly in front of the garage doors show signs of failure.

This type of surface failure, known as spalling or scaling, is more common in colder climates where freeze-thaw cycles and deicing chemicals are prevalent. Freezing causes the water in the capillaries of the concrete to expand, creating pressure. Over time, the expansive pressure from repeated cycles of freezing and thawing can break away the top surface of the concrete, leaving pit marks and exposing the coarse aggregate. Deicing chemicals only aggravate the already-stressed concrete by allowing more water to migrate into the concrete, thus increasing the size and depth of the spalling failures when a freeze occurs. For more on how to solve this problem, see Fixing a Spalled Driveway. 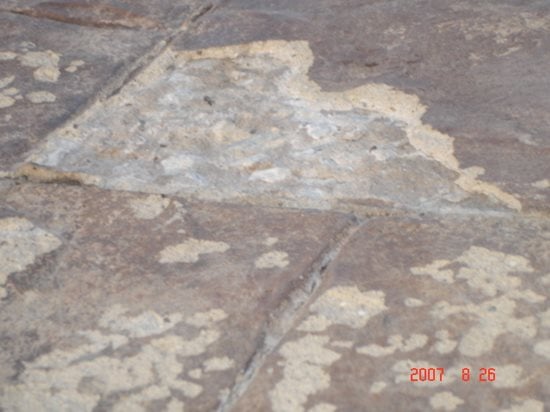 This stamped concrete patio is flaking away due to a surface layer of weak concrete.

I hope you can give me some idea about what's going on with my concrete pool deck. The deck was poured in August 2005 by a local contractor, who then stamped the concrete in an Ashlar slate pattern using a dry color release. After he washed off the residual dry color from the surface, the deck did not look evenly colored. Some areas had barely any color while others had too much. I told the contractor that the color was unacceptable and needed to be fixed before the sealing. Despite that, when I wasn't home the contractor went ahead and applied a sealer pigmented with a dark brown stain. That made the deck look even worse, but it isn't my biggest problem. After the first winter, which was mild for the central Midwest, the decorative surface of the deck started to peel and chip away. In some large areas, the surface came off completely, down to the aggregate. I did not apply deicing salts, and no water was left lying on the surface. Unfortunately, you have a slab of decorative concrete that's in bad shape and beyond easy repair. As the photo clearly illustrates, the top 1/2 to 1 inch of the concrete surface is beginning to come off because the stone, which gives concrete its strength, is pushed down, leaving a weak sandy layer on top. Once the top surface has been breached, it's just a matter of time before the entire top will break apart. Because the layer below with the stone showing appears to be strong and intact, you have two repair options: totally rip out and replace the slab or remove the top 1 inch and cover the underlying concrete with a stamped overlay.

In my opinion, the problem is not caused by the contractor's coloring methods. Instead, it's probably due to poor installation techniques, poor curing, a bad concrete mix or a combination of all three. Stamping the surface of bad concrete only speeds up the deterioration process. What makes things worse is that the contractor is refusing to take any responsibility and will not get involved to help figure out what happened.

A gray-colored stamped concrete driveway was poured for a front entrance to a motel. The driveway is exposed to a cold climate and developed etching, cracking, and minor spalling within a year. No deicing salts were used. What could be the causes?

First, all concrete cracks. The real questions are what type of cracking took place, and was the cracking preventable or controllable? A random crack in concrete, while aesthetically unpleasing, can occur even with the best mix design and proper placement, finishing and control jointing practices. What is not acceptable and can be avoided are surface spider cracking, called “shrinkage cracking,” and spalling due to poor mix design, placement and finishing. These concrete repair videos explain how and why these problems occur.

Shrinkage cracking is caused by rapid drying of the concrete surface by wind or high heat. Proper placement and curing practices are required to prevent this. Spalling is caused by one or more of the following: a poor concrete mix, poor finishing, or overwatering. These all cause a weak surface, which fails when the concrete experiences stress. In your case, the stress was caused by exposure to hot and cold temperature extremes over the course of a year and high traffic.

Levelflor® by Rapid Set For indoor & outdoor use. Excellent for repair projects.

Ideas and deals each week!