How do you give an outdoor deck in Boulder, Colo., the tranquility of a Japanese tea garden? Fiddlehead Designs of Denver used the transformational powers of concrete to bring a touch of the Orient to the Rocky Mountain state.

The backyard retreat is a 2,000-square-foot addition to an existing deck. The space was expanded to include an outdoor kitchen, dining area and sitting corner (where the bench is located), with the goal of creating distinctive areas with different purposes. 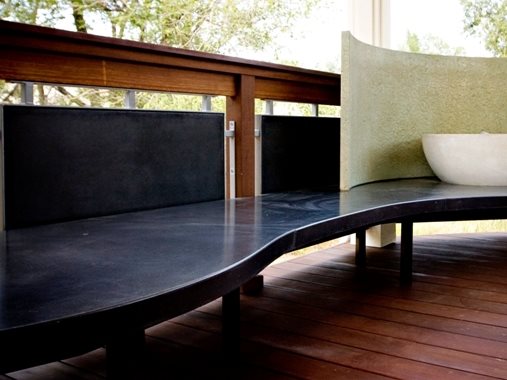 "Our clients have a background in interior design, so we worked very closely with them on creating a space that reflected their aesthetic style and incorporated the functionality they needed," says Aaron Graybill of Fiddlehead. "Aesthetically the client was going for a Japanese tea garden feel while still blending with the exterior architecture of the house, which is a traditional colonial style with clapboard siding. They wanted to use a lot of natural materials in their raw form, letting the character of the material speak for itself."

Naturally, concrete was high on their list because of its ability to be customized while retaining its natural qualities. "Concrete was really the only material that could be used and still maintain the minimalism the clients were after," says Graybill.

The concrete elements custom crafted for the project include an elevated curvilinear bench, a fire bowl partially inset into one end of the bench, and a pale green tea-stained firewall curving around the bowl. Framing the sitting area are four 2x3-foot concrete panels set into metal railings. All the concrete pieces were formed and cast in Fiddlehead's shop and assembled onsite.

The fire bowl, which burns natural gas, is in the shape a Japanese teacup. "This is the first natural-gas fire bowl we've done, but it would work well on most wood decks because it's elevated off the deck, and the concrete is a noncombustible barrier," says Graybill. (Learn more about designing outdoor concrete fire features.)

The firewall was curved to wrap around the bowl and echo the curve of the bench. "The interesting thing is that this firewall was an afterthought driven more by fear of an open flame, a wood deck, and unpredictable building inspectors. But in retrospect, we all feel that the wall is what really makes the design," Graybill explains.

The charcoal-gray concrete bench is 2 inches thick, 13 feet long, and rests on slender legs of square steel tubing. It was designed to fit in a corner of the deck that is hexagonal in shape. The curvilinear shape of the bench helps to soften the geometry of the space.

About 2 inches of the bowl protrudes through to the underside of the bench. "The weight of the concrete bowl and the incredibly snug fit in the void we cast in the bench hold it in place very securely. The firewall is fastened to the bench using silicone caulk and Tapcon screws," Graybill explains.

"Getting the color of the firewall right was a challenge," says Graybill. "The client had used tile for the cabinetry in the outdoor kitchen and wanted to match the color in the wall. The tile coloring was pretty complex, with a light tan undertone and a slightly striated blend of green and brown. Through a lot of experimentation with acid staining and tea staining we were able to get it extremely close."

The firewall was cast with no pigment—just white portland cement and fly ash. Fiddlehead then stained the wall with Blush-Tone acid stain from Brickform in a jade color and applied a natural black-tea wash.

For the bench, concrete panels and fire bowl, Fiddlehead used integral powdered pigments from Blue Concrete. The deep gray of the bench and panels was achieved with a carbon black pigment, and the porcelain tone of the fire bowl was produced by adding a titanium-white pigment to white portland cement.

To seal and protect the concrete, Fiddlehead used Pro-Seal Ultra Shield II-A from Pro-Seal Products. (Read more about Ultra Shield II-A.) "It provides the best balance between the stain resistance of a topical sealer and the look and feel of a penetrating sealer. It also has zero VOCs and is water-based, which is pretty important to us," says Graybill.

Before applying the sealer, Fiddlehead dry polished the concrete with a pneumatic sander and medium-grit sandpaper. However, achieving a flawless finish wasn't the goal. "On this project the more character, such as bugholes and mottling, the better," says Graybill.

Get notified when new projects are added to ConcreteNetwork.com - Free monthly email