A Little Variety in Concrete Countertops Spices up a Kitchen Concrete Countertop Island
Length: 01:40
Watch an overview of this project involving a half concrete and half butcher block countertop island.

James Scheh, Flowstone Concrete Studio, uses many different techniques to create his concrete countertops, but one thing he insists on is that they remain definitively concrete. "We don't do concrete that's being made to imitate something else," he said.

In this recently completed home, Scheh used two colors and several ground sections in the countertops for this circular kitchen, plus two other colors for bathroom countertops. "The kitchen is almost a full circle with an island that is half concrete and half butcher block," he said. "We also did the master bath with a sage green and a utility half bath which is black."

The black sink has an integrally cast cove around the perimeter, with the backsplash attached to the back wall, Scheh's way of making the countertop more watertight. The cove is custom designed for each sink, according to the owner's or architect's ideas. 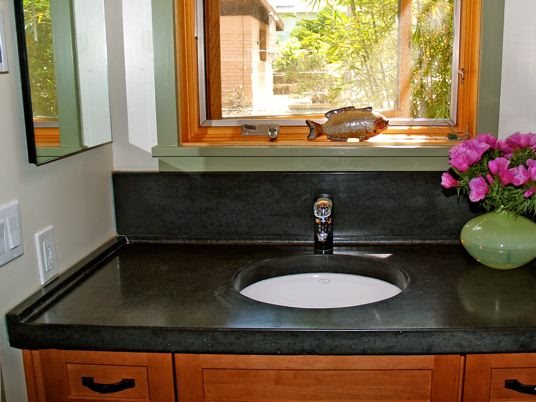 Generally, for smaller sinks, he prefers to use mass-produced sink basins attached to the concrete countertop. "It all depends on what they ask for. All the molds are custom built, with the exception of a couple of sinks that we can replicate, but most are just one off and after it's poured the mold is dismantled. We do pour some sinks, but most of those are large sinks." 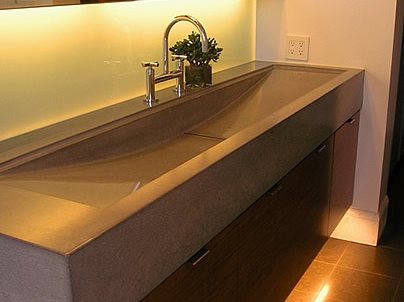 Everything Scheh does is precast in his shop, mostly top side down, but he also casts some with the finished surface up. "We do some that look like they are poured in place. Most precast countertops are perfectly flat and perfectly smooth but if you cast it so you actually trowel it then it looks more like natural concrete instead of the hyper-smooth finish of a normal precast countertop."

For the concrete and butcher block island, Scheh cast the countertop in natural gray concrete then ground it to expose the aggregate, which had been seeded with mother of pearl.

"Along the front of the main sink we dropped the thickness of the concrete to 1 inch so it's lower and easier to get into the sink--so the sink creates the feeling that it is settled down into the countertop," said Scheh. "To the right of the sink is an inset for a cutting board-the board is inlaid into the countertop-it just sticks up a little bit so as you work on it, it won't slide around. As you come around the countertop there are trivets next to the stove top so you can set anything hot right onto the rods. Those are actually square stock ¼ by ¼ x 12 inch stainless steel that sit about 1/8 inch above the countertop. We cast in voids and then the rods are attached with marine grade epoxy-they are very permanent."

Along the front curving side of the serving bar portion of the countertop is a thinned section that Scheh ground to expose the aggregate. "That's what the architect wanted," he said. "The ground swath is a slightly different level and the whole section of concrete is cast about an eighth of an inch thinner. We cast in a void that makes it slightly depressed so we didn't have to grind off a lot to get that thinned section. This way all we did was grind the surface off to expose it. Otherwise we would have had to grind off a lot of concrete at a consistent level which is hard to do."

To prevent stains, Scheh starts with a very dense concrete mix that resists food penetration. "We use some fly ash plus we use about a 7-sack mix, which produces an extremely dense concrete." He then adds stiff glass fibers to the mix that he credits with preventing cracks. "It's a very rigid glass fiber, very sharp, more like a chopped fiber. A lot of fibers are flexible, but this one is surprisingly strong. We don't get much cracking or shrinkage even in bigger pieces-not even many hairline cracks."

To seal the surface, Scheh uses a two-part system starting with the very dense concrete. Then he treats it with three to four coats of high-solids-content water-based acrylic. On top of that he uses carnauba wax. "It's a pretty good sealer, that combination. The acrylic long term is probably the best sealer because it is very maintainable for the homeowner. As long as the acrylic is place the oil isn't so much of a problem--but lemon juice or red wine-red wine is the worst, it's got acid and tannins that work together."

"The thing is," said Scheh, "concrete's permeable, things will soak into concrete. It's kind of the whole idea-it's going to reflect the material, what the material really is, like cedar turns gray-it's not going to stay like new cedar. With most concrete you're going to get some mottling over time. It's a constant battle in this industry. Architects and owners need to understand that it is concrete and it is what it is. If what they really want is something else then they should get something else."