Curved and Colored Concrete Countertop Gets Attention in Rockford, Michigan 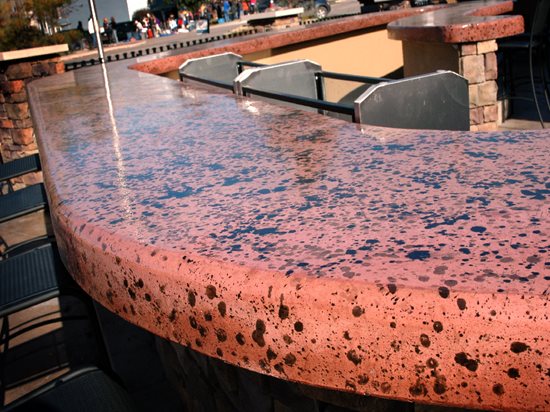 Nobel Concrete completed a project for the Promenade in Rockford, Michigan, along the Rogue River, called "Reds on the River." A diverse group of businesses are scheduled to fill the building, including an insurance company, law firm, doctor's office, retail stores, wine store and an upscale restaurant.

Nobel Concrete was contracted by a local general contractor for the decorative concrete. Stamping started in April 2006, was installed in several phases and was completed in September. The project consisted of 14,000 square feet of stamped concrete resembling natural stone.

A heavy stone seamless texture stamp was used to imprint the stone pattern into light wheat integrally-colored concrete, highlighted with light brown color hardener and a brown powder-release agent, before it was sealed with solvent-based acrylic sealer with a non-slip additive. 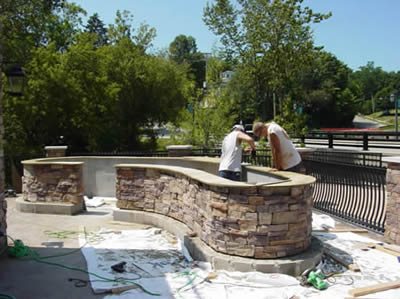 Nobel Concrete was also contracted for the installation of a concrete bar top. Eerdmans says the outdoor bar presented a challenge as it was to be 60 feet in length by 22 inches, with a cantilever, and nothing was straight, which escalated the difficulty level from set up to finishing the curved radius.

Samples were made and the color Red Clay was chosen. A base was fastened to the existing wall that would stay under the counter. A foam buffer was used on each side for expansion and contraction of the top. The cantilever forms were then attached and braced, and then the bendable plastic side forms (Form A Curve) were attached. 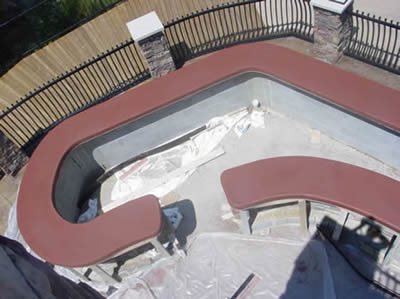 Three hundred sixty linear feet of #4 bar rod was used to reinforce the concrete top. Concrete was ordered from Grand Rapids Gravel, and four employees placed the concrete with five-gallon pails and put the finial finish on the top. The setup and pour took a full two days.

As soon as the concrete was finished, a wet curing paper (Ultracure by McDonald Technology) was used to cover and slow down the curing process. This was kept wet for three days of curing then removed; the top was allowed to cure an additional 10 days before the acid stain application was applied. Ebony acid stain by Bomanite was then applied with a special technique to look like acid rain. The bar top was then neutralized and sealed with two coats of urethane (Bomathane SB). The final product is a beautiful outdoor bar top that fits into the Tuscan village of Rockford.