The Evolution of Nobel Concrete: From Footings to High-End Decorative Work 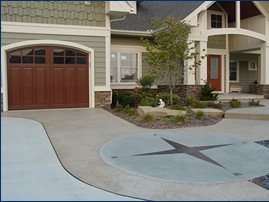 Jephthah Nobel started the company in 1989, and, back then, he and his employee focused on footings for houses. Then, in 1992, Nobel hired Isaac Jonker, and in 1993, he hired Ben Jonker, with whom he started a regular flatwork crew. 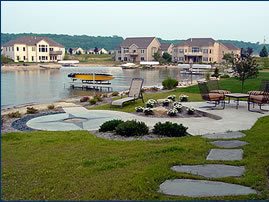 In 1997, Jeff Nobel called his second cousin, David Eerdmans, and asked him if he wanted to help create a decorative concrete crew for Nobel Concrete. Eerdmans joined the team, and as of 2003, he is part owner of Great Lakes Bomanite, which is a division of Nobel Concrete.

Eerdmans explains that his eclectic background as owner of a cleaning service, a truck washing company, a wood-working and cabinet-making business, a manufacturer of loudspeakers, and opener of a retail store were all "school" to get him ready for his work at Nobel Concrete.

"I've been all over the board, so when Jeff called me I knew I wanted something for the future, something that would hold my interest and I could grow with while it grew," Eerdmans recalls. "I'm creative and artistic, and that also appealed to me to be able to put my artistic ability to good use." 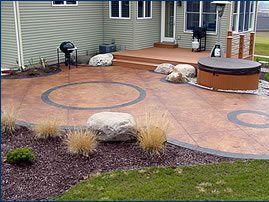 With a market expanding as far away as 150 miles (one way), Nobel Concrete has projects in places such as Niles, Lansing, Travers City and other areas in Michigan, with most of their work concentrated in the greater Grand Rapids area.

As for their portfolio, it consists of mostly residential projects with some light commercial work, although Eerdmans says that this year they've been bidding on larger commercial work. One such project, which will be coming up soon, is the decorative work at the Ford Federal building in downtown Grand Rapids. 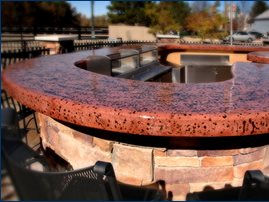 Eerdmans says the project consists of about 30,000 square feet of exterior walkways done in specialty concrete finishes, including sandscape, stamped and acid etches using Bomanite products. The project is slated for spring 2007, and Eerdmans says he's particularly excited about it because "it's in high-visibility location."

Another highly visible project Nobel Concrete recently completed was for the Promenade in Rockford, Michigan, along the Rogue River, called "Reds on the River." A diverse group of businesses are scheduled to fill the building, including an insurance company, law firm, doctor's office, retail stores, wine store and an upscale restaurant.

Nobel Concrete was contracted by a local General Contractor for the decorative concrete. Stamping started in April 2006, was installed in several phases and was completed in September. The project consisted of 14,000 square feet of stamped concrete resembling natural stone.

A heavy stone seamless texture stamp was used to imprint the stone pattern into light wheat integrally-colored concrete, highlighted with light brown color hardener and a brown powder-release agent, before it was sealed with solvent-based acrylic sealer with a non-slip additive.

Nobel Concrete was also contracted for the installation of a concrete bar top. Eerdmans says the outdoor bar presented a challenge as it was to be 60 feet in length by 22 inches, with a cantilever, and nothing was straight, which escalated the difficulty level from set up to finishing the curved radius.

Samples were made and the color Red Clay was chosen. A base was fastened to the existing wall that would stay under the counter. A foam buffer was used on each side for expansion and contraction of the top. The cantilever forms were then attached and braced, and then the bendable plastic side forms (Form A Curve) were attached. 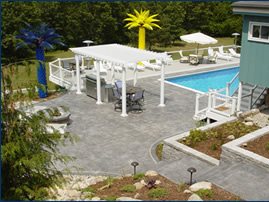 Three hundred sixty linear feet of #4 bar rod was used to reinforce the concrete top. Concrete was ordered from Grand Rapids Gravel, and four employees placed the concrete with five-gallon pails and put the finial finish on the top. The setup and pour took a full two days.

As soon as the concrete was finished, a wet curing paper (Ultracure by McDonald Technology) was used to cover and slow down the curing process. This was kept wet for three days of curing then removed; the top was allowed to cure an additional 10 days before the acid stain application was applied. Ebony acid stain by Bomanite was then applied with a special technique to look like acid rain. The bar top was then neutralized and sealed with two coats of urethane (Bomathane SB). The final product is a beautiful outdoor bar top that fits into the Tuscan village of Rockford.

Other creative outdoor projects in the Nobel Concrete portfolio include work for a residence in the Georgetown shores development in Hudsonville, Michigan, which consisted of 4,200 square feet of concrete. The concrete was stamped in Heavy Stone texture, and Sand color hardener was used with a Light Brown release. The compass was created with acid stains in brown and black, before it was all sealed with a solvent-based acrylic. 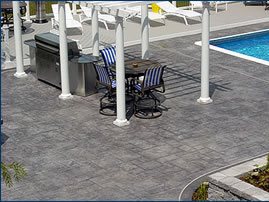 For another project, this one in Newaygo, Michigan, Nobel Concrete installed a stamped concrete pool deck, a total of 2,515 square feet of stamped work in medium ashlar slate pattern. The color used was Seal Gray integral, with a Cobblestone Gray release. The borders were done in Cobblestone Gray with liquid release, and the whole thing was sealed with solvent-based acrylic. Once the project was complete, the homeowner had 18-foot palm trees with lights installed around the work.

Eerdmans says that since he came on board in 1997, the direction of the company has changed, starting with flatwork and stamping, which led to acid staining, microtopping and overlays, as well as their latest endeavor, precast countertops.

He adds, "We feel that decorative concrete is going to be the future for our company. We are very driven to provide the highest-quality work for our customer, while focusing just as intently on customer service, no matter whether we are doing a gray concrete driveway, or a $40,000 decorative pool deck. But the satisfaction we get from the more complex and detailed jobs is unequalled by anything else that we do."

And as Nobel Concrete looks forward to the future, so too do their clients, who can expect more creative offerings as the company continues along its current path.