While concrete homes may still be a rarity in most of the United States, in the aftermath of Super Storm Sandy, there may be a whole block of concrete homes going in to replace the wood-framed ones that took a beating during the hurricane. Below is the story of a home that survived Sandy nearly unscathed while others nearby were damaged so badly that they are now uninhabitable. 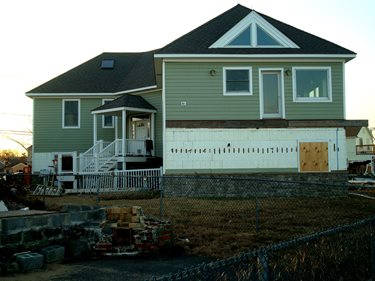 After Hurricane Sandy, the ICF home was structurally intact, with only a section of exterior siding missing.

Another home, just three lots down, looked like this following the super storm.

In October of 2012 Hurricane Sandy left many coastal homes in New Jersey destroyed. However, a recent article in Concrete Homes magazine profiles a home in Union Beach that weathered the storm with only minor damage. So what made this home different? Why didn’t the furry of Sandy cause it severe damage as she did every other home on the block?

Here’s how the story began:

Ten years ago when John Seth Sochacki III recommended to his mother-in-law that her new home…should be built using Insulating Concrete Forms (ICFs), little did he know that it would one day provide a refuge for he and his wife and their two children during a super storm. 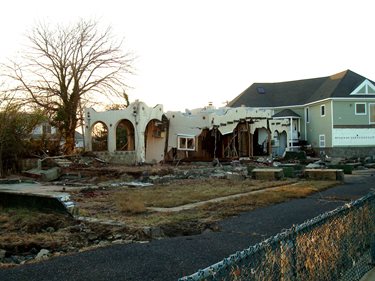 The home next door was also completely destroyed by the hurricane, while the concrete home stands strong. 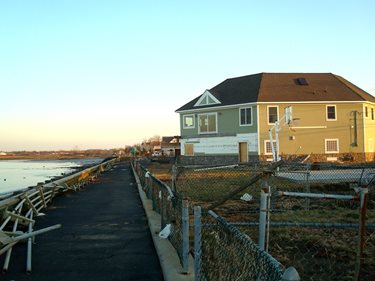 With major damage all around it, the Hallet House is a testament to the strength of ICF construction.

After significant research, John picked ICF construction for the home because it offers safety, security and energy-efficiency. This decision at the time of construction paid off when his whole family, including his mother-in-law and homeowner Leonora Hallet, safely rode out Sandy’s onslaught of intense rain, extreme wind and wild waves in the beachfront home. The only damages to the house were the loss of some exterior siding and a bit of damp drywall. To this day the home is still occupied, while all the others on the beachfront street are condemned and deserted. Some of the homes nearby were reduced to only foundations and rubble.

Bill Naegeli is an ICF distributor and builder who heard of the Hallet House from a relief worker and researched it to provide the story about it... He says, “It is painfully obvious that we can build homes that can withstand significant hurricanes, tornadoes, and even fires, yet the average homeowner is practically unaware that this technology exists!”

This New Jersey home is a testament to the strength of ICF construction. Hopefully, when the neighbors rebuild they will take note and follow in John’s footsteps.

Note: Portions of this article were excerpted from the article “Sandy Survivor: A beachfront ICF home still provides shelter for the owner”.