ICF Homes - Optimizing the Energy Efficiency of an ICF Home

Without question, using insulating concrete forms (ICFs) to build the exterior walls of a home is one of the best ways to save energy - and dramatically reduce heating and cooling costs. But builders and homeowners shouldn't become complacent. There are many other measures they can take to boost the energy performance of an ICF home. 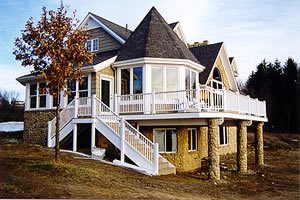 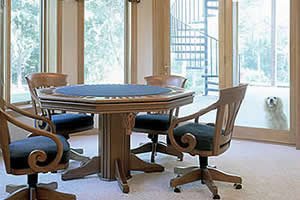 ICF homes naturally conserve energy, but their energy efficiency can be optimized when homeowners implement a few key procedures. Photo Courtesy of Reward Walls. On the interior of an ICF home, pay close attention to details such as placing ductwork in insulated space, and blocking areas where outside air can penetrate such as around doors and window.

"People think that just building a home with ICF walls covers it in terms of energy efficiency, but it doesn't. The true secret to optimum energy efficiency is to make the structure as airtight as possible while keeping the air quality very pure," says Richard Rue, CEO of EnergyWise Structures, Arlington, Texas. His mechanical engineering firm specializes in ultra-energy-efficient construction by designing the HVAC system to work in harmony with a structure's thermal envelope. Along with maximizing a home's energy performance, the company also focuses on indoor air quality to ensure a healthy, mold-free environment.

To come up with engineered solutions for obtaining superior energy efficiency, Rue uses a proprietary computer program developed after more than 15 years of experience in analyzing over 20,000 structures. He knows, probably better than anyone, the strategies that work and the mistakes to avoid. So Concrete Expressions sought his expertise to compile 10 tips for making ICF homes super energy efficient.

"With ICFs, you've certainly used the best wall system available. All these other strategies just complement it to complete the thermal envelope," he says.

1. Install top-quality windows and doorsWhen you are sizing mechanical systems for ICF structures, the load required largely depends on the windows and doors: how many, how well insulated they are, and what direction they face, Rue explains. He recommends using "thermally broken" windows, those with wood or vinyl frames as opposed to aluminum, which readily conducts heat and cold. If you plan to install sliding glass doors, also avoid aluminum frames and buy the best doors you can afford, with gaskets that seal properly to minimize air infiltration. As an alternative, Rue suggests installing French doors that swing open only on one side.

Using double-pane low-E glass in windows and doors will also curtail heat loss in the winter and heat gain in the summer. "Look for the U-factor of the glass - anything below 0.35 is good," says Rue. The U-factor (also called the U-value) measures the conduction, radiation, and convective heat transfer from the warm side to the cold side of the window. The lower the U-factor, the better insulated the window.

2. Control interior moistureIn airtight homes, it's essential to control humidity levels to prevent mold and mildew problems. "You must address every room in the house that creates moisture, such as the kitchen, laundry room, and bathrooms," stresses Rue.

Some moisture-control remedies he recommends:

3. Use variable-speed HVAC equipmentA single-speed furnace or air conditioner comes on full-blast no matter what. That may be okay in the dead of winter or heat of summer, but in the spring or fall, when outdoor air temperatures are less extreme, a single-speed unit may heat or cool rooms too quickly.

"Variable-speed equipment can ramp down from a 5-ton unit, for example, to as little as a 1 1/2 tons," says Rue. "This will help control moisture in an ICF house much better because the unit will operate at a lower speed and run longer to control humidity."

Another must is a humidistat that works in conjunction with the thermostat, so the HVAC equipment will continue to run until the house reaches optimum humidity levels. "When you use these systems, not only will you have an ultra-energy-efficient home, you will also have an ultra-healthy home with dramatically better air quality. Keeping humidity levels below 50 percent creates an environment where even dust mites and mold spores can't grow," says Rue.

4. Size HVAC equipment correctlySeek the expertise of a professional mechanical contractor when choosing the right load capacity for the HVAC equipment in an ICF home. Oversizing can lead to higher utility bills as well as moisture and mildew problems.

"HVAC contractors often think more is better. It's not - even for heating," says Rue. A well-built ICF home, for example, may need only 30,000 BTUs of heating capacity. But the smallest single-speed gas furnace available puts out about 60,000 BTUs, more than double the capacity the home needs. This excess heat can be a problem, according to Rue. "The second year the owner is in the home, everything that has moisture in it, like the caulking for the molding and cabinetry, will start to dry out and crack because there's way too much heat in the house," he says, noting that viable solutions are to switch to a heat pump or install a two-speed furnace that can operate at a lower capacity.

"If you spend the money to build with ICFs, it would be foolish not to spend the extra money (about $2 per square foot) to insulate the attic with sprayed foam," he says. Another benefit: Applying the foam to the underside of the roof rather than to the attic floor makes the space entirely usable for storage.

Rue is not a fan of using fiberglass insulation, because it won't completely block air infiltration. "If you build an ICF house and put fiberglass in the attic, it's like building a Ferrari chassis and dropping in a Yugo engine," he contends.

6. Locate all ductwork in insulated spaceIronically, the ducts that distribute conditioned air throughout the home are often the most poorly insulated elements of the thermal envelope. Adjustments in construction that locate the ductwork in insulated space will be rewarded with a sizeable reduction in monthly heating and cooling bills, and sometimes a drop in HVAC system requirements. "For a 3,000-square-foot house, on average, you can reduce the tonnage requirements by at least 1/2 ton because you don't have duct heat loss or gain," says Rue.

If the ductwork runs through the attic, insulate the space with sprayed foam (as noted above). Poorly insulated attics can reach temperatures exceeding 135? F. Other options include installing the ductwork in furr-downs, crawl spaces, or basements (in one-story homes) or laying the ducts on the rafters and covering them with foam or cellulose insulation.

7. Caulk every spot where air could enterBuilding with airtight ICF walls doesn't make caulking obsolete. There are plenty of penetrations in the building framework where air can enter, such as around window and door frames, sill plates, and entry points for plumbing and electrical systems.

"You can't overcaulk. The rule of thumb: If it looks like it could leak air, caulk it," says Rue. He advises paying special attention to windows and doors, caulking them thoroughly with a 35-year siliconized material. On the interior, he says to caulk any penetrations into the attic.

8. Avoid the use of recessed can lightsRecessed lights that penetrate into the attic space can be the "kiss of death," unless you've insulated the attic with sprayed foam, says Rue. "One of these seemingly innocuous little lights represents 1 square foot of uninsulated attic space, and 20 of them is equivalent to having a door open in the attic at all times."

When a homeowner insists on recessed lights, he recommends paying a few extra dollars for an insulated brand with airtight seals.

9. Install compatible HVAC systemsOnly use HVAC equipment from the same manufacturer to optimize operating efficiency, advises Rue. "Air conditioning contractors are notorious for mixing and matching equipment to save money. But the system will run more efficiently if all the components - including the condensers, furnace, and coils - are from the same manufacturer," he says.

10. Provide "ventilation on demand"ICF homeowners are sometimes concerned that their homes are too airtight and will permit the buildup of dangerous carbon monoxide levels. For peace of mind, Rue recommends the installation of a "ventilation on demand" system - a CO2 sensor that automatically monitors the air quality of the house.

"When the air quality gets to an unacceptable level, it will send a signal to the furnace to open up a motorized damper that brings in outside air to improve the indoor air quality," he explains. "It's a very inexpensive piece of assurance (the cost is about $300) that you have high-quality air in the house."

VOD also eliminates the need for a separate system to continually bring in outside air. "Manufacturers of these systems claim they bring in 'fresh' air, but you're also bringing in humidity and pollution," notes Rue. "You're better off spending your money on a good air-infiltration system."

On the ConcreteNetwork.com: Building a Home With Concrete

Anne Balogh writes feature articles each month for The Concrete Network ( www.concretenetwork.com). She is a freelance writer based in Glen Ellyn, Ill., and a former editor of Concrete Construction magazine.