Two projects built using Reward Wall Systems won top awards at the ICFA (Insulating Concrete Form Association) annual conference in St. Louis, September 25. Of the seven awards presented, the Megaplex 20 Theater at the District in South Jordan, Utah, received the ICFA Excellence Award for Large Commercial Project and was selected from all commercial projects as the Grand Commercial Project for 2007. 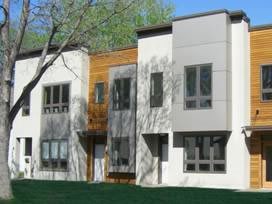 E2 City Homes four-plex in Minneapolis was the recipient of the ICFA Award for Sustainability. "One of the meaningful things the ICFA does is it recognizes efforts to expand the industry. We are pleased they highlighted the work of our customers and other construction professionals for their roles in that effort," said Hank Pfeiffer, Reward's chief operating officer.

Already named the largest ICF building in the United States, the Megaplex 20 Theater is a 206,000 square-foot structure owned by Larry H. Miller Theater, Inc. It was designed by FFKR Architects and built by Sahara Construction and IMS Masonry.

The theater used a record number of ICFs for the 350,000 square-feet of walls. The tall wall surfaces—hundreds of feet long and more than 50 feet tall in places—faced the challenge of being completely straight. Reward Wall Systems provided contractors with all the required attributes and enabled the project to be completed within a 13-month time frame. 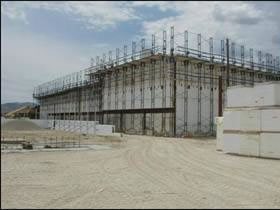 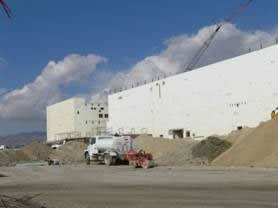 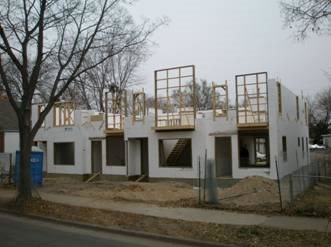 E2 City Homes was completed in the spring of 2007. The project was recognized by ICFA for its LEED certification and energy-efficient features. The high effective R-value of Reward ICFs helped the contractor, Urban Project, earn points toward LEED certification. Cemstone Contractor Supply of Mendota Heights, Minn. was the ICF distributor for the E2 City Homes project.

"The Megaplex 20 and E2 City Homes are examples of ICFs being used successfully in the theater and multi-family housing industries," added Pfeiffer. "Sustainable construction practices also are becoming a more important part of the industry. The E2 City Homes project demonstrates the importance of ICF construction in green building."