The first time you drive down the Pima Freeway in Scottsdale, Ariz., you'll find it impossible to keep your eyes on the road. Off to your side, you'll see a wall 8 miles long displaying larger-than-life images of desert flora and fauna. This roadside mural delights and educates by presenting a visual history of the native species and geography of the local surroundings. But in this case, the images are actually molded into concrete, providing a permanent display to be enjoyed by travelers for decades to come.

Architectural concrete walls, with original artwork or other graphics cast in relief in the surface, are gaining in popularity for a variety of public and commercial projects, including retaining walls, bridges, privacy walls, and sound barriers. The desert wall that runs along the Pima Freeway, called The Path Most Traveled, ranges in height from 20 to 60 feet and is adorned with nearly 100 abstract and representational desert-inspired motifs, including prickly pear cacti 40 feet tall and giant lizards 67 feet long. 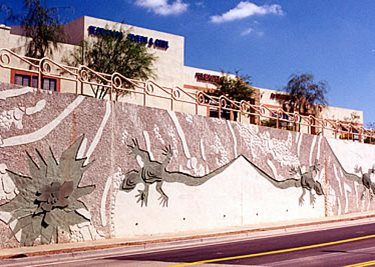 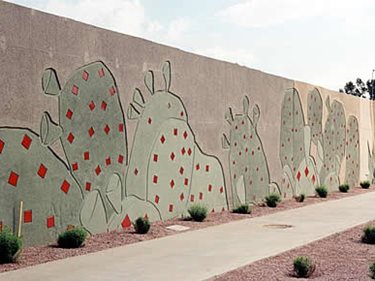 Giant lizards and cacti, accented with acrylic stains, are part of the desert theme portrayed on the Pima Freeway wall.
Original art created by Carolyn Braaksma of Denver. Scott System

Such large-scale, bas-relief images in concrete are possible with the use of custom formliners molded from original art. Scott System, a Denver, Colo., inventor and manufacturer of reusable elastomeric urethane formliners, is the first company to perfect this process on such a grand scale, says Dana Scott, marketing director. Her father Buck Scott founded the company in 1969 and has patented more than 20 different products for the concrete construction industry.

In addition to providing all the liners for the Pima Freeway project, Scott System has worked with other community groups, architects, and transportation departments across the country to turn imposing gray concrete walls into aesthetically pleasing art forms. These ornamental walls are now enhancing highways, subdivisions, beaches, parks, and airports. 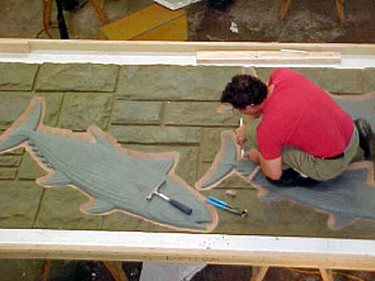 Transforming plain concrete walls into original art is often a collaborative effort, says Dana. The process begins with the design team agreeing on a vision for the project, and then artists are commissioned to create conceptual drawings. Once the design is approved, the artist produces a three-dimensional prototype (usually of modeling clay or polystyrene foam) from which a casting is made to produce a liner in the reverse image of the original work. The liners are attached to the inside of the wall forms into which the wet concrete is placed. When the forms are removed after the concrete sets, the transferred design is revealed. At this point, acrylic stains can be applied to provide accents of color. Or the concrete can be integrally colored before its placed into the forms.

The elastomeric urethane used to produce the liners is highly durable and moldable. You can achieve a really high degree of detail with the urethane because its a liquid synthetic rubber when poured, so it picks up all the detail. We even used the material to lift the image from a quarter, and you can see all the detail cast in the concrete, says Dana.

Size is also no limitation. The urethane is flexible, so huge liners can be produced without any seams. For one company, we made a one-piece liner that was over 100 feet long, says Dana. But she notes that most of the liners are more manageable in size. It seems that more highway projects today are using mechanically stabilized earth (MSE) walls that consist of 5x5-foot concrete sections. So we often end up making liners to fit those forms, and the design carries from one panel to another, like a puzzle.

Scott System also produces formliners that replicate the textures of natural stone and wood. These liners are cast off the actual materials, resulting in a high degree of realism. Other liner patterns offered include brick and block, fractured fins, and flutes.

We still supply these standard patterns, but we really like to get involved with the art projects, Dana emphasizes. The artists she works with enjoy the challenge as well, and some have even become specialists in concrete wall art. Artists new to the process, however, can get assistance from Scott System mold makers, who will help them replicate just about any design imaginable.

Scott System is currently producing custom liners for two major highway expansion projects - one in Denver, Colo., and the other in Corpus Christi, Texas.

The T-REX (Transportation Expansion Project) in Denver includes 19 miles of highway expansion and light-rail construction on Interstate Highways 25 and 225. As part of this ambitious project - slated to be finished in 2007concrete sound-barrier walls are being installed with design elements depicting Colorado's geography and wildlife, including giant buffalo, soaring swallows, and aerial views of farmland. Surface Strategy LLC and Big 3D Productions of Colorado created the art for the project. 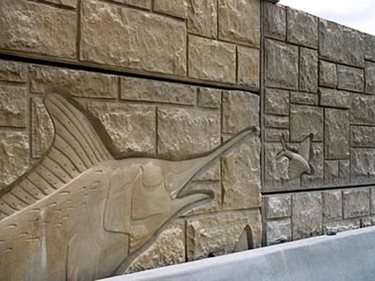 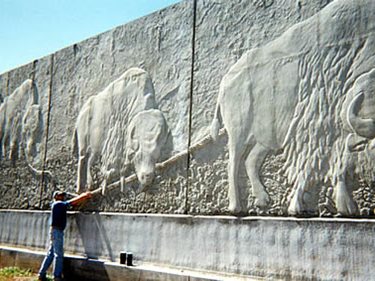 Another highway wall - to be unveiled within the next year-runs along a two-mile stretch of Corpus Christi's Crosstown Interchange, which connects State Highways 358 and 286. This 2,500-square-foot MSE wall displays cast images of indigenous fish (including sailfish, crab, and marlin) projecting from an ashlar-stone-patterned background. Scott System made 78 different molds in 10X5-foot dimensions to produce formliners for the job, based on the original designs of Texas DOT landscape architect Stephen Walker.

Anne Balogh writes feature articles each month for The Concrete Network (www.concretenetwork.com). She is a freelance writer based in Glen Ellyn, Ill., and a former editor of Concrete Construction magazine.