Board formed concrete features a wood grain texture on the face of the concrete. It is popular indoors and out, in homes and businesses, and for small and large projects. You can build an entire home with board-formed concrete, a feature wall in your restaurant, or a retaining wall in your backyard.

Here are some of our favorite examples of board formed concrete in action: 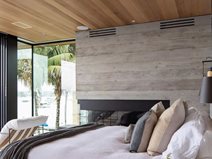 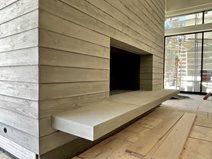 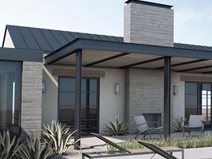 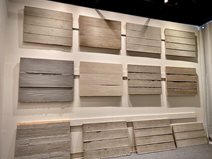 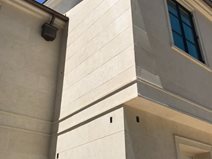 More examples of board form concrete planks and panels 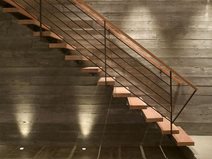 Board formed walls were used inside and outside this home. Architect Jonathan Feldman says, “Board-formed concrete was a natural choice because of its texture and lines, as well as how the grain of the boards imprints on the concrete.” 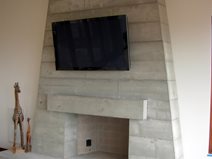 This concrete fireplace emulates the look of stacked timber. It was precast in panels using custom molds lined with rough cut Douglas fir.

At Stone Brewery in San Diego, board formed concrete was used for a feature wall. The brewery's icon gargoyle was also cast into the concrete. 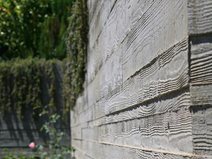 Board formed concrete walls are also great for use outside. This garden retaining wall has the textural appeal of wood, but will last much longer.

Is board formed concrete expensive?

The process of board forming is fairly simple and often costs less than other concrete finishing techniques like stamping. It is typically also less expensive than building walls with brick or stone.

History of board forming

Today, some people go out of their way to recreate the "old fashioned look"—board formed concrete.

Before plastic and metal, wood was the forming material of choice for precast and cast in place vertical concrete. Wood was cheap, readily available and could withstand the significant weight and pressure associated with a concrete pour.

75 years ago, when steel-reinforced vertical cast in place concrete became the standard in large construction projects, little attention was given to the exterior texture the concrete achieved in the casting process. The concrete was poured, and the impression that the wood forms made on the concrete was just an accepted by-product of the process.

At that time, wood was not sanded, and the rough texture of the unfinished wood often left the recognizable wood grain texture in the cast concrete surface. This wood texture was the norm for decades, and became the forefather to what is now the multimillion-dollar textured form liner industry.

Board Formed Concrete Seat Walls
Time: 01:46
Board formed concrete is a unique way to add a decorative finish to concrete seat walls.