What most people think of when they hear the phrase retaining wall is an unsightly cinder block structure. However, Ron Odell thinks outside the box. He and his crew recently completed an incredibly unique retaining wall project in Big Rock Canyon, an area near Malibu, California. Ron Odell's Custom Concrete (ROCC) brought their decorative skills to this job, creating a one-of-a-kind vertical concrete wall that became a focal point rather than a distracting factor. 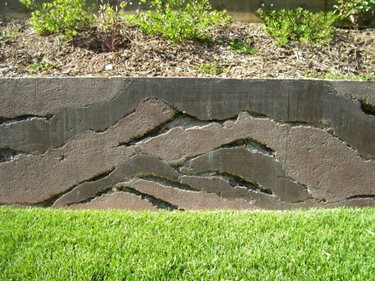 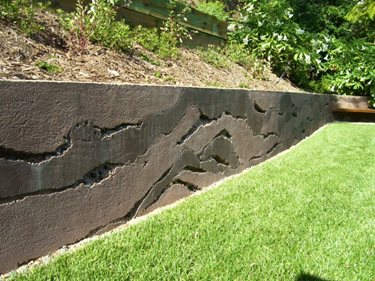 Designing and building this wall took a lot of creativity, faith and hard work. "This was totally new, something we hadn't done before," Ron explains, "I was excited, but also pretty nervous." The wall stretches over one hundred feet in length and is more than a foot wide. Because of its size, three trucks loads of concrete, in two different colors, were used. "We worked steadily on the wall all day, the entire time anticipating what the end result would be like," says Ron. 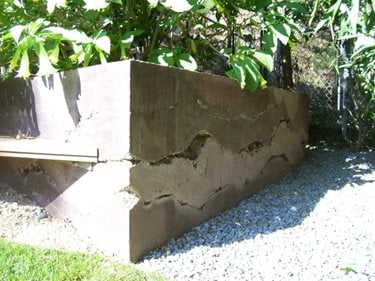 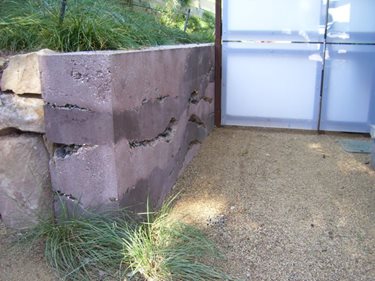 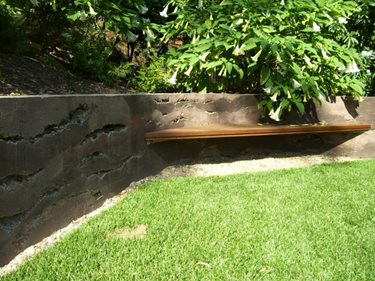 ROCC created custom forms for the wall into which they poured alternating layers of colored concrete. Curves had to be created in the forms as well as perfect 90 degree corners; all of this was done without form ties. After the forms were ready, ROCC began pouring the concrete in place. They started with a layer of light gray concrete, then sprinkled rocks and other natural debris on top of the wet concrete. Next a layer of dark grey concrete was poured, with rocks on top of that, and so on and so on. The goal was to create an organic look, and the rocks were meant to leave random voids in the wall. The fresh concrete was allowed to flow freely, which also helped achieve the organic look.

A few additional touches helped to finish off this wall. While the concrete in the curved portion was still fresh, metal brackets were set into it to provide a resting place for a bench. This created an inviting seating area in an interesting environment. Once the forms were removed from the wall, portions of the concrete were wire brushed, giving the finished wall a sandy look and texture. "This further helped create the organic feel that the client desired," says Ron.

Ultimately, this first time project turned out great, Ron couldn't have been happier with the process and the outcome. Despite the nervousness of trying something new, Ron and his crew had a blast creating this truly unique wall. This wall is a testament to Ron's passion for crafting one-of-a-kind concrete creations, including concrete countertops, bathtubs, fireplaces, furniture, hardscapes and floors.