Video of the Castle Bed & Breakfast
Time: 00:59
Watch an overview of the vertical concrete work installed by Wayne Sellon of Tajmawall in Temecula, CA.

The Castle Bed & Breakfast in Temecula, California is using concrete walls, floors, and even ceilings to create different themes for each of its guest rooms. The English Tudor Room has a river rock theme, while the French Country Room has a more formal cut stone appearance. In the Egyptian Room there are big blocky stones for the walls and tub enclosure, while the Bavarian Room has concrete that looks like rough-cut wood.

"For the Celtic Room," says Wayne Sellon, Tajmawall, Temecula, Calif., "they wanted a straw thatched roof look so I embedded straw into the mix before we put it on the ceiling and then I forced more straw into the wet material and stained it with a gold stain."

Sellon's interior work at the Castle is particularly memorable for tub and shower enclosures. "For the Venetian Room," he said, "we did the tub enclosure over green-board. It's been three years and we've had no problems whatsoever."

The Castle project has been ongoing for three years, Sellon notes. "I got started with them by knocking on the door. I said, 'your castle needs some rock.' He was looking at stick-on rock but when I said I could beat that he let me try. So we did the entry gate and they liked it so we kept going. There are 7,000 square feet on the outside of the building and no two stone pieces are alike." 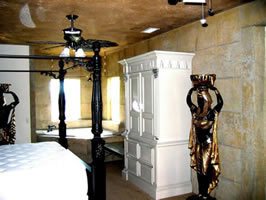 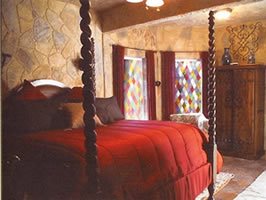 Tajmawall's process comes from Sellon's experience as a plasterer. "I was 20 years old and my new wife's step dad was a plastering contractor and that's how I got started. When we were building a house we would make the foundation from white cement and carve it to look like stone. We made the carving tools out of steel banding and a wooden stick held together with tape. We would texture it with tin foil or plastic bags. No one back then thought you could take this places, but now I can beat the price of stick-on rock and provide more variety in the texture and staining process."

Tajmawall uses a proprietary polymer concrete mixture. Workers hand-apply the material with hock and trowel, then stamp the wet material for texture. After the concrete sets, they come back and hand carve the rock features, then come back the next day and stain.

"We don't use a stamp to create the stones. For example in the Medieval Room that random stone pattern is all hand carved without any pattern. The exterior of the Castle is an ashlar slate and that's all hand carved too. We use 2-foot levels and we just cut it randomly. Stamps are hard to work with and the pattern looks repetitious. My customers like the idea that they are getting something that's one of a kind." Sellon no longer uses steel banding as carving tools, but he still makes the tools himself. 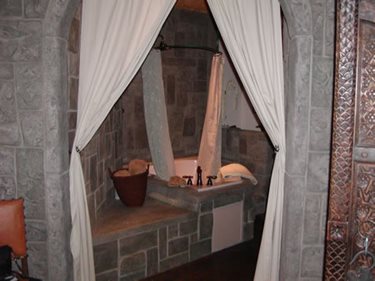 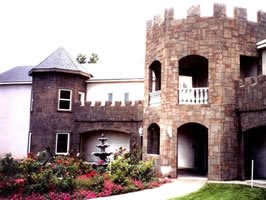 In the Castle's dining room, Sellon used a slightly different approach—what he calls "old-school style from the early 1950s when they were building Disneyland." Rather than relying just on stain, Tajmawall workers applied a gray coat and then on top of that a brown coat of cementitious material. They then textured it with texture mats and carved through the top coat to "get an automatic mortar joint." This technique was also used on the Castle's exterior walls.

"Generally we mix a penetrating sealer into the stain," said Sellon, "so we don't bother to seal again. Although, if it's a shower stall, we will use a high grade sealer."

Sellon has been gradually completing rooms at the Castle over the past three years. "We have kept doing work and have been able to use it as a fill work. The owners, Louis and Sherry DeBernardo, let me take people in there all the time to show off our work. It's very high profile and great advertising." 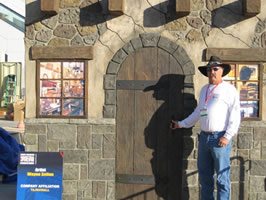 Wayne Sellon with the wall he built at the 2007 World of Concrete Artistry in Decorative Concrete Demos.

Asked about Sellon's work, the Castle's owner, Louie Di Bernardo, said, "His unique, customized style and design is impressive. Wayne is not just an expert in craftmanship but an artisan. His cleanliness is amazing as the work was done with full furnishings and carpeting in place. The guests at The Castle ask if the stone is real because it looks like it is from a castle in Scotland. His product is creative and custom fit—not premanufactured."

Sellon also has been called on to teach his techniques and he is giving a two-day walls-only seminar. "We teach carving and staining. I'm the only one in the country who's doing a total hands-on walls class-- two days and that's not enough. We also offer a service where I will go out and help someone on a project for 2 or 3 days. What we are trying to do is teach people not only how to do it but also how to sell it--how to approach the customer and take it into a middle-class home and make it affordable. What we've managed to do is take this to Middle America, where 20 years ago this was strictly theme park stuff."


Submit Your Own Project Photos