Learn about building a tennis court with concrete and find out how much it will cost By Anne Balogh, The Concrete Network 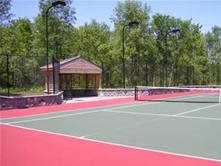 Are you an avid athlete who wants the convenience of stepping out your own backdoor to play an impromptu tennis match or one-on-one game of basketball?

Installing a playing surface made of concrete can give you the home-court advantage, putting an end to the long waits for a vacant public court. But aside from convenience, a concrete tennis court offers plenty of other benefits, delivering enduring performance unmatched by its main opponent, asphalt.

Find concrete contractors near me.

The decision to install a top-of-the-line concrete court is just the beginning, however. You also need to evaluate your site, determine the type of playing surface you want, choose a surfacing system, and even pick out a color scheme. The next step is to find a qualified, experienced contractor who can install the court you want at a fair price. Here are some of the basics you need to know before getting in the game.

Post-tensioned concrete courts earn the trophy for durability, playability, and long-term value. Benefits over asphalt include: 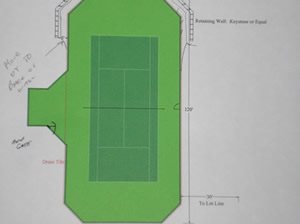 What gives concrete the competitive edge? According to Fred Kolkmann, tennis and track division manager for Munson Inc., Glendale, Wis., concrete play courts are more durable, low maintenance, and crack resistant. Munson specializes in post-tensioned concrete and other types of play courts, and has won national and state awards for its concrete tennis court installations.

"The biggest drawback of asphalt courts is not that they crack, for even a post-tensioned slab may crack from shrinkage or even develop minor structural cracking, but that the cracks continue to widen year after year," says Kolkmann. "I have seen asphalt courts with cracks as wide as 2 to 3 inches, making them a hazard to the players. The advantage with a post-tensioned slab is that it will not allow the crack to widen, but will keep it compressed to a very thin line."

Kolkmann says that asphalt courts can also develop low areas over time due to settling of the soil or base under the asphalt surface. "With a post-tensioned slab, this area can be bridged and no settling will occur. In addition, concrete courts can often be installed on unstable soils where it would be cost-prohibitive to do extensive excavating and base work to support an asphalt court," he says.

Post-tensioned concrete is reinforced with a grid of high-strength sheathed steel tendons, or cables. While the concrete is curing, the cables are tensioned in both directions and held permanently under stress by anchoring them in a perimeter beam. This squeezing action keeps the concrete in compression, improving its tensile (or bending) strength. The more the concrete is squeezed together, the less likely it is that shrinkage cracks will develop or open. (See a more complete description of post-tensioning from the Post-Tensioning Institute.)

Another benefit of post-tensioning is that contractors can build larger slabs using thinner concrete sections, and they don't have to install control joints which can interfere with play. "In order to build a reinforced concrete court that has the same structural capabilities as a post-tensioned court, we would have to install so much steel and concrete that the reinforced court would actually cost more," says Kolkmann. "Also, a reinforced court needs control joints, usually at a spacing of 10 to 15 feet, including in the playing area. Eventually these joints may widen, as well as any cracks that appear."

COST OF INSTALLING A TENNIS COURT

A well-constructed, properly maintained concrete court can provide decades of recreational enjoyment. But you'll have to pay to play. The cost of a regulation-size post-tensioned concrete tennis court with a cushioned surface can be double that of an equivalent asphalt court. "The basic asphalt court starts at about $40,000 to $45,000, with the average price probably in the mid $50s to low $60s. For a post-tensioned court, you'll pay in the low $100,000 range," says Kolkmann.

According to the ASBA, your final tally for a play court depends on a number of variables including the condition and accessibility of the site, the type of surfacing system applied, and any accessories and amenities such as landscaping, fencing, a spectator area, and lighting for night play. 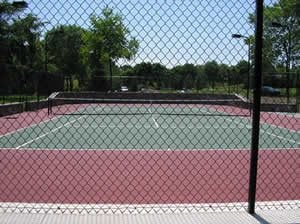 Although Kolkmann admits that concrete courts cost substantially more initially than asphalt, an asphalt surface often requires more frequent and costly upkeep over its lifespan to repair cracking and settling. "Through our own recordkeeping, we estimate that an asphalt court will be unavailable for play, due to repairs being made, for about 100 days over a 20-year period," he says. "During this same time, a post-tensioned slab would be down for about 20 days. In our climate in the upper Midwest, repairs can only be done in the summer, when everyone wants to play. For a private court, the downtime may not be as crucial. But for a club, it can be a substantial unknown cost in lost revenue."

If you're on a budget, there are ways you can cut back on your expenditure for a concrete court without compromising quality, such as opting for a hard court rather than cushioned surface or holding off on the installation of fencing and landscaping.

ASSESSING THE SUITABILITY OF A POSSIBLE TENNIS COURT SITE

Whether you choose post-tensioned concrete or another type of slab for your sport court, it's important to make sure your backyard space can accommodate the layout you have in mind.

Here are the key factors to consider:

Whether your preference is tennis, basketball, or another court sport, one of the most important factors influencing your game is the type of surface you play on. The characteristics of the court surface not only affect how fast the ball bounces, but also contribute to your comfort and ease of movement.

The International Tennis Federation has tested the typical ball speed for various court surfaces, and classifies them as slow, medium, or fast. Generally, a hard concrete surface—with no surfacing system applied—provides a fast speed of play. If that's not your preference or you want a more resilient surface to reduce the impact on your joints, an abundance of acrylic color coatings and cushioning systems are on the market that allow you to adapt the court surface to your style of play.

Acrylic color coatings are a combination of acrylic latex resins, pigments, and silica sand (for texture). They protect the court from the elements, enhance its appearance, and improve foot traction and consistency in ball bounce. They also make it possible to tailor the speed of play to your preferences by adjusting the amount, type, and size of sand used in the coating. For a standard concrete tennis court, the cost to install an acrylic color coating runs about $6,000, according to Kolkmann. To improve bonding of the coating, the concrete surface should have a broom finish (a lightly textured profile obtained by pushing a broom over freshly placed concrete).

Cushioned surfacing systems consist of one or more layers of cushioning material (usually rubber or plastic fillers) that result in a resilient surface with good traction and ball response. These systems are popular for both tennis and basketball courts because they allow for longer playing times by absorbing impact and reducing muscle fatigue.

Modular tile systems are the newest cushioning option on the market and offer the benefits of easy snap-together installation, long service life, and minimal maintenance. These systems feature interlocking, 12-inch square tiles made of high-impact polypropylene. The tiles rest slightly above the base surface to allow for better drainage and eliminate puddling. The downside of this cushioned comfort is the cost, which can run as high as high as $3 per square foot installed (or over $21,000 for a 60 x 120-foot tennis court).

The ITF provides a list of many of the court surfacing products available (categorized by the rate of ball speed they provide) along with links to the websites of suppliers.

CHOOSING A COLOR SCHEME FOR YOUR TENNIS COURT

Both color coatings and cushioned surfacing systems come in an array of colors, allowing you to branch out from the traditional green court surface and use nearly any color or combination of colors you choose on your backyard tennis court. While there is no "regulation" color scheme for tennis courts, some colors work better under certain conditions.

In addition to aesthetics, ASBA recommends considering the following factors:

To ensure a winning installation, your backyard tennis court project should adhere to the playbook of good slab construction. ASBA offers detailed construction guidelines for both reinforced concrete and post-tensioned sport court surfaces, including recommendations for site preparation, subsurface and surface drainage, and concrete proportioning and mixing. 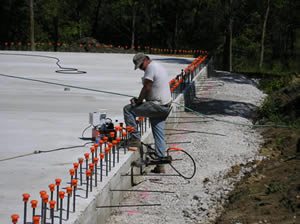 A dropped edge around this post-tensioned court supports a decorative poured concrete perimeter wall, eliminating the need to install a separate foundation wall. The stone veneer is actually lightweight concrete formed in molds to mimic natural split granite. The product is manufactured by Dutch Quality Stone. Photo by Munson Inc. in Glendale, WI

Kolkmann stresses the importance of taking no shortcuts during the preparation phases. "For our courts, we require at least a 10-inch stone base over a geotextile fabric. We use 6 to 8 inches of clear stone [screened and washed limestone used as a drainage medium] and then a 2- to 4-inch lift of 3/4-inch minus stone. The entire court is surrounded by 4-inch drain tile to reduce the amount of surface and subsurface water that gets under a court. The lift of clear stone also allows the water to drain under the court much faster, should any get underneath. All the stone is laser-graded to the correct slope."

The concrete that goes into your court should have a compressive strength of at least 3,000 psi and a slump no more than 4 inches, according to ASBA guidelines. Munson specifies a 4,000-psi mix with a 6% air content, a 4-inch slump, and a water reducer to improve workability and keep the water-to-cement ratio low (no more than 0.40).

The concrete slab should be placed at a thickness of at least 4 inches, or 5 inches if subject to repeated freeze/thaw cycles. Munson's post-tensioned slabs are a minimum of 5 inches thick, with the post-tensioning cables spaced 3 feet apart. Before installing the slab, Munson lays down two layers of 10-mil polyethylene sheeting to reduce drag as the slab shrinks upon curing and to serve as a moisture-vapor barrier.

Before hiring a local contractor to build your play court, ask plenty of questions and do your research. Tennis court construction is a highly specialized field, so it's important to find a contractor with extensive experience. Kolkmann recommends using someone who is an active member of ASBA, with at least 15% to 20% of annual business devoted to designing and constructing sport surfaces. (ASBA has a searchable database of certified builder members.)

"The contractor the homeowner chooses should be aware of all the different surface types, speed of play, and the size and slope requirements for court construction," stresses Kolkmann. The contractor should also pay close attention to special considerations, he adds, such as the desired surface texture, the finish of the concrete required to ensure good bonding of the color coating, and provisions for fencing and net posts.

Be sure to ask the contractor for references from past clients and then visit completed projects. If you like what you see, arrange a time to sit down with the contractor to assess your needs and discuss your options. Ask for a detailed proposal itemizing the work that will be included and an estimate of how much your court will cost.

Often a project will run more efficiently if you use a contractor who offers turnkey installation of your court, so you only deal with one firm from start to finish. For example, Munson builds courts from the ground up, including excavation, concrete placement, installation of net posts and fencing, and color coating.