Concrete Rug Looks as Warm and Inviting as the Real Thing

"Here's the space, now do your magic," are seven words any concrete contractor would love to hear. John Carney, owner of Art Over Concrete in Murfreesboro, Tennessee, has heard these words numerous times as he has consistently wowed his clients with beautiful, quality artwork over concrete. One of his most recent projects has consumed half of the year while he has transformed nearly every room in a more than 10,000-square-foot house. Carney says, "I've done everything in the house except the living room and guest bath-those are on the schedule for next spring!"

Carney certainly worked his magic when he used PermaCrete to create a stunning floor in the home's master bedroom. Using PermaCrete to cover the entire floor, Carney took inspiration from the large rectangular windows in the room to create slate-textured rectangular panels on the floor. He then used a Modello stencil to create an 8.5' by 10.5' concrete rug in front of the grand fireplace of the 600-square-foot room. According to a June 2006 article in Today's Homes magazine in Nashville, the "Persian rug John created with PermaCrete looks so real (and we agree), the homeowner's dog even sleeps on it." 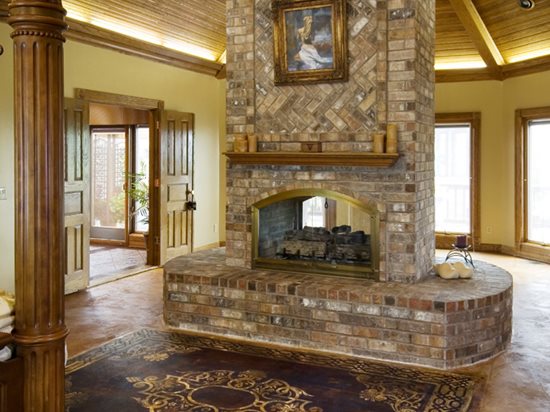 Carney was concerned that the edge of the rug would look too much like a stencil against the rest of the floor, so he took Modello dyes in a darker color than the edge of stained floor and faintly brushed along the edge so there was no distinct line. When everything was done, he used two more coats of PermaCrete sealer.

Carney's approach to working with clients
When the rug project was finished, the homeowner's were ecstatic. Carney attributes his ability to exceed his client's expectations by the approach he uses when he first meets them. Carney says he spends at least one to three hours with a client at the very beginning. He sees their house and the area they want transformed-he notices the art hanging on their walls, etc. He gets an idea of what they like to see. As they look through his portfolio, he listens to their reactions.

A mentor of his once told him, "They don't know what they want, that's why they hired you." So, Carney gets the parameters of what they generally want, but no real specifics. He tells them, "You want a pretty picture. When I leave, that's what you'll have." He says, "Too much choice confuses homeowners. They like to know they've hired an expert who can design for them based on their general tastes. I know the colors, the products, etc. Why should the customer have to pick all that out or know all about it?" Carney believes this is what gives his clients greater confidence in him. "It relieves their 'buyer's worry,'" he says.

Tips for working with overlays

Carney says having patience is the most challenging aspect to doing overlays. He doesn't rush projects. He only takes on one project per week with one assistant. Currently, he's booked through April 07. He said it took a couple of hours to lay down the Modello stencil rug. Whenever he does something to concrete, he always lets it dry overnight, even if it's not necessary. He makes sure it's dry. This helps him produce the highest quality, most beautiful floors. He says this allotment of time also helps him think things through. He's not rushing, he can make good decisions.

Getting started in concrete

Carney retired from being an optician, and said "retirement was fun for about 30 days, then I was bored." While thumbing through an entrepreneur's magazine, he saw an ad for PermaCrete and decided to check it out. Before he knew it, he was doing all kinds of overlays. "I had no previous experience, no background with concrete. I knew nothing about concrete, and I've been doing this now for four years," says Carney.

PermaCrete's unique product line is designed to provide its dealers with everything needed for resurfacing all types of vertical and horizontal applications. Additionally, PermaCrete offers new and existing dealers a complete line of installation equipment as well as marketing and other support materials. This makes it easy to get started as a new PermaCrete Dealer without having to experience the usual problems of opening a business.