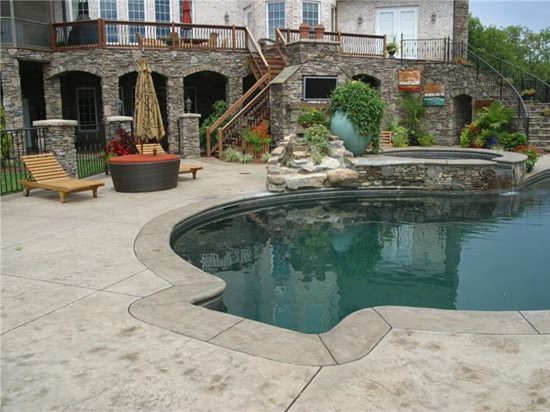 In June of 2007, Carolina Bomanite Corp. was approached by one of their builder clients to assist on a large pool deck project. The owners, along with the builder, were not happy with some original concrete work that was completed during the home's construction. "After reviewing a few samples, and a browse through our photo books, the owners decided not only to go with Carolina Bomanite for the pool deck, but to remove and replace an existing rear patio, front sidewalk, steps and porch," says John Fletcher, Marketing Coordinator for Carolina Bomanite Corp.

"After agreeing to the terms of the proposal, the owners informed us of their projected completion date...less than 30 days," says Fletcher. "A July 4th party was planned with several out of town guests expected to attend. Doing some quick math, this left us with approximately 20 working days to demo, layout, form, pour, and finish almost 10,000sf of decorative concrete, coping, and cantilever." 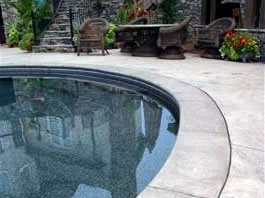 Not being one to back down from a challenge, Carolina Bomanite Corp. took the project on with full force in the summer heat. "We started by installing over 250 lineal feet of cast-in-place coping, along with over 300 lineal feet of cantilevered edge to allow for a stone veneer around the raised perimeter. Fortunately, the builder had pre-plumbed the subgrade for drainage, which allowed us to install pre-sloped channel drain in several locations to accommodate multiple grade heights. No formal drawings were available during the project, so all layout decisions were made on the job," says Fletcher.

Slate texture in Bomanite sand color hardener was sawcut in a 7'x7' grid. This allowed every joint to become a control cut if needed. This pattern kept unplanned cracking to a minimum. Only 2 small cracks are visible to this day. "Long days and weekend work was the norm in order for us to complete our phase on time as promised," recalls Fletcher. "The owner supplied cold drinks and occasional glimpse of his million dollar car collection in order to keep the crews motivated." 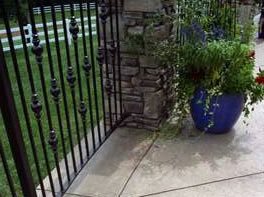 Once the pool deck was completed, it was decided to create a grouted look, even though the use of real grout wasn't an option with movement in every joint a possibility. After a few samples, a V-blade was used to enhance the joints and then Bomanite ebony reactive stain was applied to the exposed concrete of the freshly ground joint. This process gave the desired "shadow" look that enhanced the sawcut pattern.

Carolina Bomanite completed the work on time, and the owner had a fantastic party. Shortly after the party, we were called back to install another sidewalk connecting the pool deck to the front driveway. "Seems this owner can't get enough of decorative concrete on this beautiful estate property," beams Fletcher.