A contractor skilled in resurfacing can clean-up, patch-up and resurface a hotel or residential pool deck in only five days, according to Travis Winters, the owner of Nebraska Concrete Coatings. He shared this example. 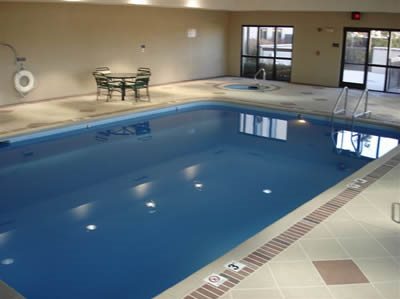 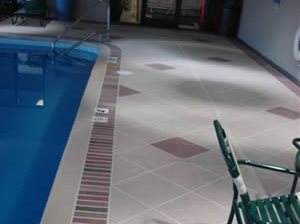 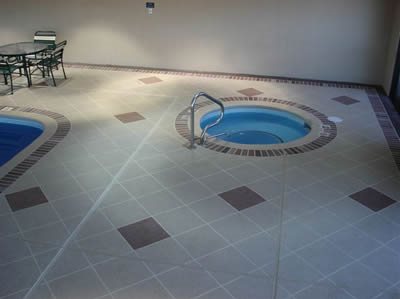 Hotels receive ratings on their appearance and cleanliness that have an impact on where travelers choose to book a room. When pool areas show ugly stains and wear, it can pull down the hotel's satisfaction ratings.

The hotel manager wanted to renovate the pool and spa area and upgrade the appearance. At the same time he required minimal maintenance to keep it looking good, so that the pool area would rate highly on guest surveys. Therefore, resurfacing with an acrylic overlay and adding a fresh color scheme offered a good solution, but the hotel management wanted minimal disruption for guests. Turn around time was a consideration.

In addition to chemical and hard water stains, this indoor hotel pool deck in Nebraska had a rough surface that was unfriendly to bare feet. Children who fell could get badly scraped by the high ridges of the uneven surface. A surface smooth enough for barefoot patrons was needed. It also had to have slip-resistance for pool safety on the wet surface, and good long-term wearability.

Nebraska Concrete Coatings (NCC) was hired to clean the pool area and resurface it with a durable and attractive acrylic topping. NCC suggested adding a border with the appearance of a brick trim to define the edge of the pool and spa and to provide aesthetic appeal and improve visibility of the edge for safety reasons.

NCC first ground down the raised texture of the rough broom finished concrete to improve flatness and provide a good surface for the topping to adhere well. After using a 7-inch diamond grinder with vacuum that provided a dust-free work environment, the surface was washed with muriatic acid, neutralized and then power washed to provide a clean surface.

Next, a skim coat was applied. After drying, any imperfections in the base were abraded. Then areas were measured and carefully taped off to define the borders and the individual "tile" areas. Travis applied three different colors to the borders using a small hopper gun. To cover the large expanse, NCC used an air compressor and pump system. Later, light spattering was done to add depth. Accent tiles of the darker color were added.

The overall project was sealed with three coats of CCI SuperSeal 2000 to provide high durability and reduced maintenance. On the final day, NCC used grout to seal the pool deck around the walls for a clean appearance. Grouting and repainting of the drains and other details also helped make the whole area look fresh and clean.

Travis Winters, owner of Nebraska Concrete Coatings, has been doing concrete resurfacing and renovation for six years. His company specializes in acrylic and epoxy overlay installation and acid staining. He says that the owners of this hotel were so satisfied they have referred him to many other hotels and even their family members. Later he was asked to come back to apply the same overlay to an exterior patio.

Travis says he typically uses the system by Concrete Coatings Inc, DuraSet 1000/1001, an acrylic resin with excellent adhesion, and Super Seal 2000 acrylic cure-seal, a very tough and quick drying product which provides water resistance. Having tried it in his own home he said he found it difficult to damage. High durability is important in areas like pool decks and patios where metal furniture may be dragged across the surface.