Jim Bernardine, owner of Concrete Oasis Co. in Malvern, PA, is known in his area for creating quality, custom outdoor living spaces which include pool decks, patios, outdoor kitchens, landscaping, and more. For this project, he was referred from a neighbor for whom he had created a backyard oasis. This pool was 25 years old and in bad shape. "We were going to redo the deck, tile and plaster," recalls Bernardine. "When we drained the pool, we found major structural damage."

The entire pool had to be demolished and rebuilt. "The owners hired a pool company to rebuild the pool," says Bernardine. "We were originally going to start the project in April, but since the pool had to be redone, we got started on it in August. The tile and plaster were already done. We had to do the deck."

Bernardine's crew poured concrete for the deck up to the pool's edge. Typical coping would have created a joint line on the pool deck, but Bernardine creates a cantilevered edge over the pool, and hides the expansion joint underneath.

Bernardine also built the cap surrounding the raised spa, and the retaining wall and flower boxes. "We used Coventry wall for the retaining wall," says Bernardine. He prefers the Coventry Wall System because of its ease of installation using pre-fabricated pieces that produce the look and feel of natural stone. The pieces offer a customized look because of their random sizing, including 3" and 6" heights, and 4"-14" widths available in 2" increments. 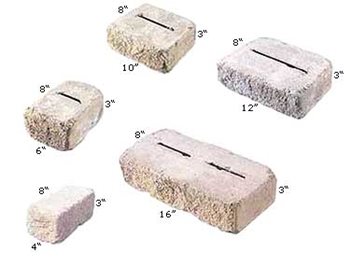 The 1,700 square foot pool deck was stamped with the ashlar slate pattern from Brickform. "We used Brickform's shake-on color hardeners in gold sandstone and pico sand," says Bernardine. The deck was hand-detailed by painting in an additional color of medium gray release agent mixed with xylene and sealer. "We also put acid stain on the deck using Brickform's ebony and amber. We randomly applied it with both a paint brush and a sprayer." 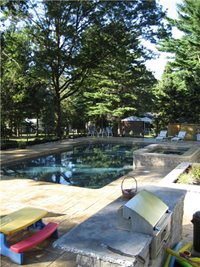 The pool was set on a raised bank which created an awkward slope between the pool and house. Using real boulders provided by the owner, Bernardine built a retaining wall with the boulders surrounding the pool area.

A 4'x8' countertop with built-in grill was also incorporated into the project. Bernardine explains, "We built a rectangular box out of Coventry wall. Then we poured the countertop using Encounter. We used charcoal integral color from Solomon, with a coral edge form. Then we installed the charcoal grill."

Part of the project also included concrete walkways leading from the house to the pool. "There are two sets of stairs," says Bernardine, "one to the pool equipment, and then one to a walkway that circles around a tree and leads to the house and driveway." For the steps, Bernardine used Proline's Italian slate skin.