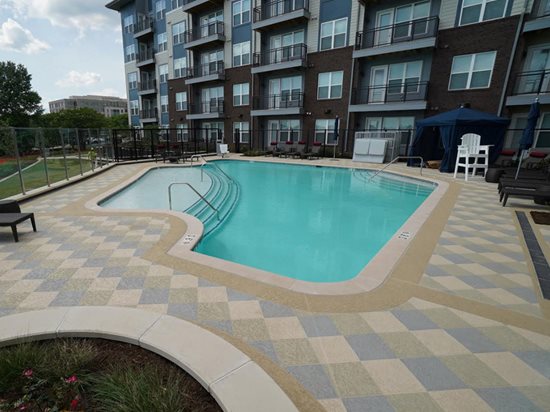 This 2,800 square foot pool deck in Centerville, Virginia, was resurfaced over a one-week period by Sundek of Washington. This project was completed under the watchful eye of production manager Guadalupe "Lupe" Velazquez and crew leader Manuel Nunez. 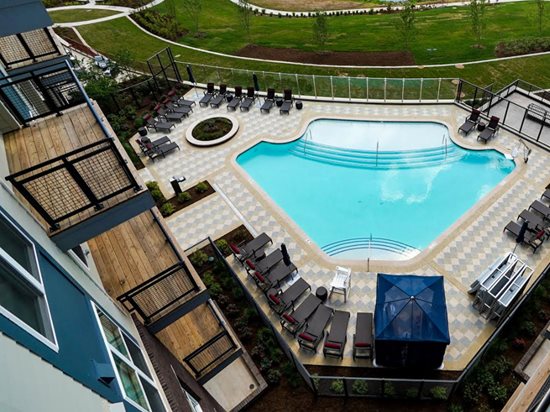 “Pool decks like this one have a wow factor that developers love and tenants enjoy,” says Bob Miller, VP & General Manager of SUNDEK of Washington. Miller worked with the owner, JLB Partners, as well as the designer, Urban, to turn a plain, gray concrete slab into a stylish outdoor lounging and entertaining area. The 2,800-square-foot pool deck at a Class A apartment complex in Centerville, Virginia, was coated with SUNDEK Classic Texture and then colored to create a checkered pattern. The pattern showcases four different colors from SUNDEK’s SunColor line, a water-based acrylic finishing coat that both tints and protects the surface. 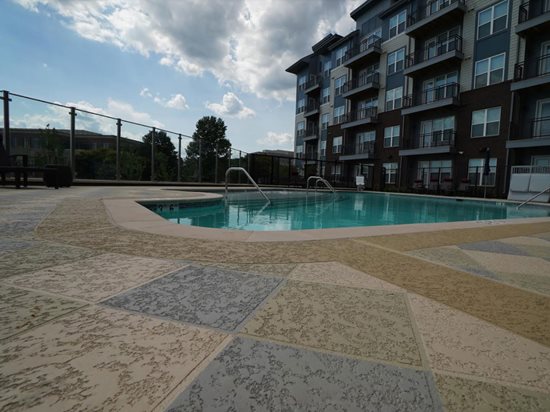 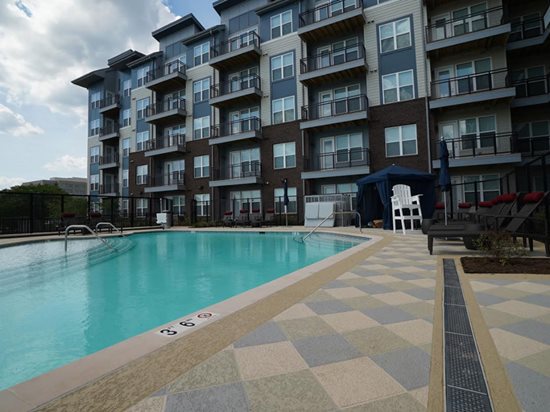 During the overlay coloring process, each of the four colors were applied individually. While one color was applied, the rest of the surface was masked-off for protection.

Before starting the project, Miller met with Adam Steiner, a representative from Urban at the time, to discuss project goals and specifications. “When we first met on site, a specific coating system was not finalized. The design was still evolving, too,” says Miller. He notes that this type of collaborative meeting, to discuss possible product applications without any preconceived specifications, is vital to the success of most projects. “It’s the best way for us to see what’s going on and then recommend products and systems that will work for a specific project. I’ve found that this approach leads to better long-term results.”

The application of the spray-on textured overlay and coloring took roughly one week from start to finish. “Some projects move faster but this pattern had lots of detail that required hand taping all the grout lines and masking off for each color,” says Miller. There was also some surface preparation work that needed to be completed before the overlay could be applied. On this project, since the concrete was pretty new, Miller and his team acid etched the surface. This opens up the pores of the concrete and helps the overlays bond with the surface more easily. They also filled in low spots and ground down raised spots in the existing concrete to provide an even surface for the overlay to be applied.

To apply the overlay, Miller’s team squeegeed down a tinted basecoat. (The basecoat was colored to match one of the final overlay colors, so if a scratch occurs it will be less noticeable.) Once the basecoat went down and grout lines were taped, the entire pool deck was sprayed with the Classic Texture overlay. After the overlay dried (about a day later) four rounds of coloring were required. This process required the team to mask off individual 12-inch by 12-inch squares in order to protect them from unwanted coloration. The coloration process took roughly three days.

The result is a pool deck that’s safe, cool to walk on, and eye-catching for potential residents of the apartment complex. “The owners, who also developed the property, are all about curb appeal and functionality,” says Miller. This system and the design deliver on both.