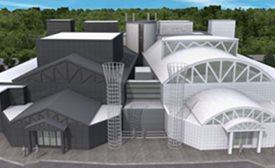 The new Illinois Holocaust Museum and Education Center located outside of Chicago in Skokie, Illinois is one of the largest centers in the country dedicated to the remembrance of those lost in the Holocaust. The museum's design, by Chicago architect Stanley Tigerman McCurry Architects, comprises three parts. A dark-colored wing with sharp angles holds exhibits that communicate the Jewish experience during the Holocaust. A light-colored wing with soft rounded angles features exhibits that represent the rescue and renewal of survivors. The two wings are connected by a third building that houses a memorial to those who perished in the Holocaust.

Polishing 8,000 square feet presented its own set of challenges for Loughrey. "The floor had been burned from over-trowelling during the finishing process when it was poured," he explains. "The museum wanted to leave the floors plain, but there was too much damage." In addition, the concrete block walls of the building had been acid washed and they, too, had burned the edges of the floors. "The acid etching from the walls took off the cream all along the interior edges of the floor. The floors were a light gray color all around the edges."

To fix the color and trowelling blemishes, Loughrey and his crew polished and dyed the floors. "We started with wet resin polishing pads, polishing from 100 grit to 800. Then we densified with Prosoco products," he says. "This left a subtle sheen on the floor that wasn't too shiny or glossy. It was meant to complement the emotional feeling of the building's interior."

The floors were then dyed with an acetone-based black dye, which was polished down and burnished with LS Guard. When complete, the floors became one cohesive color of black.

Another challenge Loughrey faced was that the building was still under construction during the polishing process. "We had to work in phases," he explains. Polishing 2,500 to 3,000 square feet at a time, Loughrey's crew would work after the close of regular construction through the night. "Then we would cover the floor with Masonite to protect it."

In the end, the solid black floor added to the emotional weight presented in the memorial. Loughrey describes the feeling the architecture and interior design evoke: "From the outside, the dark building looks like a prison with bars on the doors and windows. Inside, it has low wattage halogen lights which contribute to the dark mood of the pain and suffering so many felt. In the center portion of the building, visitors pass through a full-sized German rail car that had carried people to concentration camps and prisons. It's an enduring reminder of what took place."