When homeowners in Lebanon, Tenn. found water leaking into their carpet-covered basement, they called Ryan Samford of The Design Center, Franklin, Tenn., to come restore the room. The basement carpet was not only getting wet and soggy, but was also inhibiting the owners from enjoying the room because it affected their allergies. 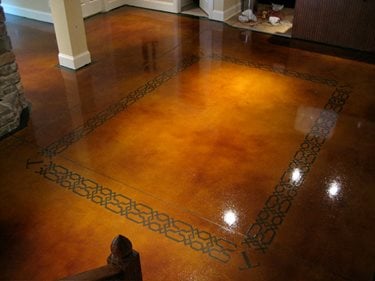 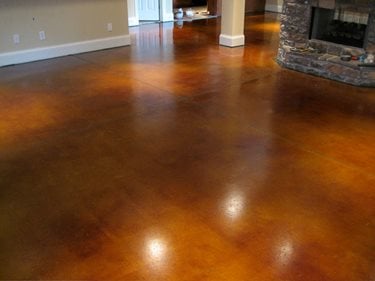 The basement remodel presented quite a few challenges for Samford. "We ripped out the carpet and found a double tack strip along the edge. The owners didn't want to do a complete overlay in the room, so we had to find a way to fill in the tack strip and get it to blend." Samford also had to find a way to cover up spray-painted words and diagrams on the concrete from when the home was built. "There were also paint, glues and mastic on the floor that had to be removed," he recalls.

To tackle the job, Samford used an 80-grip diamond grind 17" machine from HTC to even out the surface of the floor and to try to remove some of the leftover materials. He used Brickform's Camel dye and seal on the 800 square foot floor for color. Then he sealed it with a low solids epoxy sealer. "Once the floor was dry, we stained it again with Brickform's Sand color, which made it darker and gave it some variation, then we sealed again," he says.

"We caulked all the joints with silica urethane caulk, and then used a black epoxy to color in a 4-inch border around the room. This helped to cover the tack stips," explains Samford. "We also used the same epoxy with Modello stencils to outline the area where the pool table would be." Samford had a custom stencil created for the letter 'T' which was placed in the four corners of the stencil area to represent the client's last name initial. "It took three hours to peel off that stencil," recalls Samford. He finished with a clear coat.

Using the existing concrete in this basement was not only an economical way to restore it, but it also gave the homeowners the ability to customize the colors and design in the room. "The client's allergies have also gone down since the floor has been done," says Samford, making the room usable and enjoyable once again.