Find the right concrete breaker for your demolition project 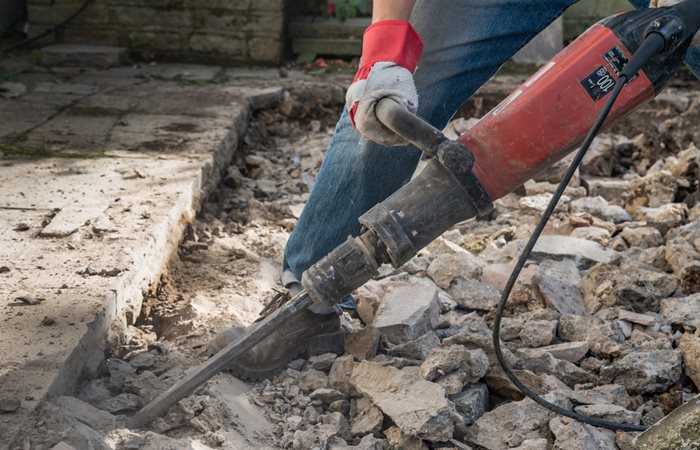 While a good old-fashioned sledgehammer can get the job done, the right power tool makes breaking concrete much easier and faster.

Jump ahead to a specific tool: 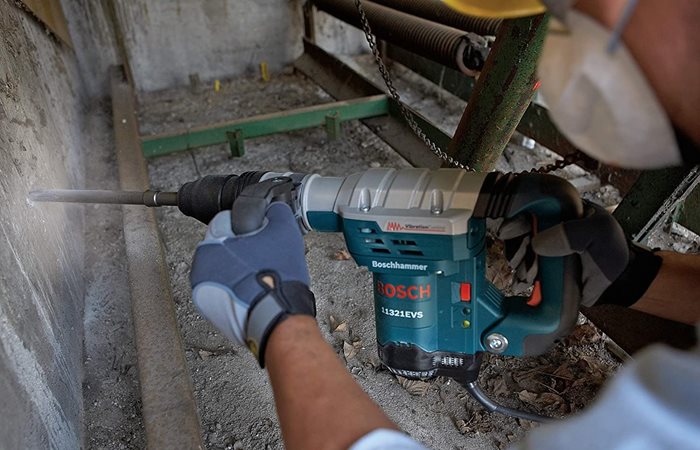 Buy from Bosch on Amazon

Chipping hammers are lightweight, hand-held concrete breakers that can be easily positioned to break vertical and overhead surfaces. By offering a controlled chipping action, these hammers allow operators to precisely chip away only specific areas.

The smallest chipping hammers, powered electrically, pneumatically, or hydraulically, usually weight between 5 and 30 pounds. As usual, a good indication of the power of the tools is their weight. The heavier the tool, the more powerful it is apt to be. The chipping action of this type of equipment is rapid, ranging from 900 to 3,000 blows per minute.

Find local concrete contractors that can tear out your old concrete and replace it with beautiful new decorative concrete.

Because chipping hammers are most often used to break concrete on vertical and overhead surfaces, they must be light. They are maneuvered by holding a handle at the back of the tool and gripping the tool by its shaft with the other hand. Some tools have a second handle along the side. This gives operators control of the tool's weight and the ability to direct its chipping action at different angles.

By offering a controlled chipping action, these hammers allow operators to precisely chip away only specific areas.

Manufacturers are offering more options than ever on their chipping hammers, including rotating, shock-absorbing handles, and heat shields. 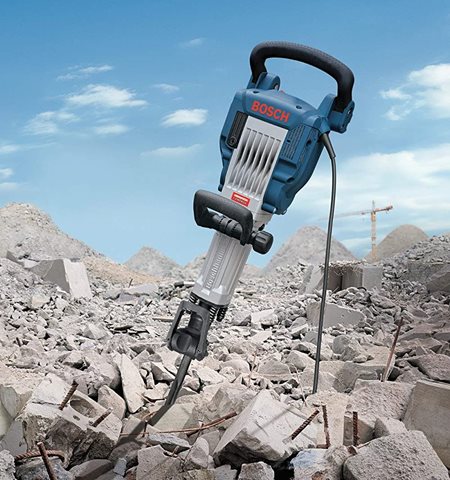 Buy from Bosch on Amazon

What demolition hammers lack in this regard in terms of versatility, however, they make up in punch. The demolition hammer is able to deliver more powerful blows than rotary hammers, since they typically have about 35% more power. This is due to the fewer parts in a demolition hammer, and sometimes a longer piston stroke, as well.

While the demolition hammer delivers fewer blows per minute than a rotary hammer, the increased strength of the tool actually makes it a quicker and more efficient means of demolishing concrete and masonry.

Wire saws were first developed in the stone quarry industry, and diamond wire saws have been used in concrete demolishing work to cut reinforced concrete since the early 1980s.

A loop of diamond wire mounted on a flywheel driven by a hydraulic or electric motor. Hydraulic drives powered by electric, gasoline, or diesel units are usually preferred on wire saws when cutting reinforced concrete, since they are both reversible and provide continuously variable speed. Water is applied to the cut to provide cooling and to flush the cut.

Diamond wire saws are more efficient than circular saws, able to cut concrete of almost any thickness. This makes them very useful for the kind of heavy demolition found in bridges, damns and thick concrete structures. In addition, they create little dust, noise and vibration, making them ideal for demolition work within inhabited structures.

There are also two main bonding systems for the diamond beads: electroplated and impregnated. Electroplating the wire involves attaching a single layer of diamond to the steel bead. The impregnated bonding system is more similar to the impregnated systems on a circular saw in which a powder metal alloy is blended with diamond, then pressed and sintered to the steel band, providing multiple layers of diamond for cutting.

Interchangeable jaws in some crushers, including cracking jaws, shear jaws and pulverizing jaws, are often used to work along with various types and configurations of jaw teeth in order to better fit the crusher to a particular job.

Secondary concrete crushers usually have some type of pulverizing jaws and are used on jobs where primary demolition is accomplished by hammers, crushers, blasting, ball and crane, or sawing. In this instance, the primary demolition work creates large quantities of concrete rubble which the secondary crusher further reduces, separating concrete from reinforcement.

Hydraulic splitters apply lateral forces against the inside of holes drilled into concrete in order to break up concrete with a minimum of noise and flying debris.

About the size of a jackhammer, the tool utilizes a shaft known as a plug-and-feather assembly which, when inserted into a drilled hole and forced downward by the tools piston, creates the lateral forces that break the concrete. No heavy impact is utilized to form the crack, which spreads quickly and without any noise between the pre-drilled holes until the concrete is split into manageable pieces.

The typical hydraulic splitter exerts a force between about 150 and 400 tons, depending on make and model. As with most pieces of equipment of this type, the smaller models with a force capacity on the lower end of the scale are used for more lightweight work, or where the equipment must be able to be handled more easily, such as in horizontal or overhead work. Larger capacity models are capable of splitting mass concrete and hard rock.

Hydraulic splitters may be available in gas- and electrically-powered models, but most contractors prefer air-powered hydraulic pumps, as the tools air-compressor can also be used to power the drills used to form the holes in the concrete. Multiple hydraulic splitters can be set up to run side-by-side off the same hydraulic pump, allowing for a greater combined splitting force, helpful when breaking up particularly thick or dense concrete.

To correctly operate a splitter, the holes must be drilled straight into the concrete at the exact diameter specified for the splitter, and be deep enough to accommodate the plug when fully extended. The plug and feathers have to be kept well lubricated in order to remain in working condition.

Hand-held pavement breakers may be thought of as a kind of heavy-duty version of the chipping hammer.

Pavement breakers weigh from 30 to 99 pounds. A good indication of a breaker's power is its weight.

Pavement breakers weighing between 40 and 50 pounds are particularly useful for removing concrete for partial-depth pavement repair. The weight of these tools gives them the power needed to break up a few inches of concrete without being so heavy that they demolish the entire pavement.

The pavement breakers weighing 60 pounds andmore can handle medium-to-heavy demolition jobs with reinforced concrete, and are used to demolish pavements, roads, and thick concrete. One example of the type of work that the heaviest breakers do is demolition of high-strength concrete found on airport runways.

The versatility of the rotary hammer allows it to demolish concrete with a hammer only method, or to deliver rotary-hammer action for boring holes in concrete. This is done in the rotary hammer mode by driving twist drills and core bits, or in the hammer only mode to utilize everything from flat chisels to ground-rod drivers.

However, this versatility comes at a price, since rotary hammers have an extra drive train that rotates drill bits in the rotary-hammer mode. This siphons off energy and decreases efficiency in the hammer-only mode.

Rotary hammers use a battering ram that floats inside a cylinder and is launched and retrieved by a piston. A shock-absorbing airspace between the ram and the piston compresses and drives the ram forward as the piston advances, then sucks it back as the piston retracts.

A hydraulic hammer shouldnt be chosen strictly on the basis of the reach, stability, or hydraulic capacity necessary, but also on the vehicle on which the tool will be mounted. Keep in mind that for a given reach, the heavier the hammer, the heavier the carrier vehicle must be. The weight of the carrier vehicle prevents overturning when the hammer is at the boom's maximum reach. Selecting a lightweight carrier decreases the boom's reach and could cause an overturning accident.

Also, remember that while most hydraulic systems run 2000-psi pressure, the flow rate varies. For the light hammers, as little as 5 gallons per minute is required. For the heavy hammers, more than 100 gallons per minute must be supplied. Again, check the hammer and carrier manufacturers' literature to match the hammer to the vehicle. If necessary, add-on hydraulic power units are available to increase the flow rate.

The speed, versatility, and impact energy of mounted breakers are widely used by contractors to demolish heavily reinforced walls, slabs and decks.

Excavator-mounted breakers can have production rates of more than 1,100 cubic yards of unreinforced concrete per day. Productivity varies depending on a variety of factors including type of concrete, accessibility, and operator skill.

In addition to demolishing concrete, many hammers can be fitted with special tool shapes that allow them to drive piles and sheeting, compact soil, edge trenches, penetrate frozen ground, and cut asphalt.

Hammer impact energy is the most important selection criteria when choosing a mounted breaker for a particular job, since the hammer must be able to hit the concrete hard enough to fracture it. Only when impact energy is sufficient does impact rate (blows per minute) become a factor.

The expansive demolition agent is a cementitious powder. Using a drill with a mixing attachment, the powder is mixed in a bucket and poured or tamped into drilled holes. As the mix hardens and expands, the concrete cracks between the drilled holes. As the hairline cracks develop over the slab, they run outward into each other and grow wider, until the slab literally falls apart under an expansive force that can exceed 12,000 psi.

Used correctly, expansive demolition agents produce little dust or debris. The only labor involved is in drilling the holes, mixing and applying the agent, and then hauling the broken up pieces of concrete away.

One cautionary note: With expansive demolition agents involves a phenomenon known as "blow- out." This happens if the powder mix gets too hot and reacts with the water too quickly for the material to expand laterally. The result can range from a puff of smoke to a loud gunshot-like sound that can send hardened mix 30 feet into the air. Since blow-outs are unpredictable, safety procedures require workers to stay well away from the drilled holes once the mix has been poured into them. If a blow-out does occur, however, it usually has little effect on the project, since the remaining mix in the hole is usually still effective enough to crack the concrete.

While pneumatic hammers were once considered state-of-the-art in the United States, they only account for a small portion of total hammers in use today. There are still a number of advantages in using pneumatic hammers, however. These include: