Many contractors specialize in making old concrete look like new again, using overlays and other resurfacing methods. But there’s also a smaller segment of concrete artisans who have mastered techniques for making new concrete look old, replicating everything from ancient Roman ruins to medieval castle floors. These old-world looks are nearly impossible to achieve with most modern-day materials. However, concrete can readily be aged by antiquing it with stain, stamping it to mimic European stone, and giving it a roughened, worn finish. See these ideas for giving your new concrete the old-world character that has been treasured for centuries.

Hand-Troweled Countertops Have an Old-World Look

Dave Grech of Trueform Concrete hand trowels his precast concrete countertops and vanities to give them an old-world look. “Our work doesn't look like concrete -- it looks like natural stone. And it has visual texture and actual texture," he says.

These homeowners wanted their new house to look like a medieval castle, floors and all. Known for his handcrafted custom-cut concrete flooring, Tony Leos of Custom Concrete Solutions designed a custom-built tool that enabled him to replicate the look of old wood planks and chiseled stone. He then used concrete stains in tan and umber to age and darken the floor. See more photos of his handiwork. 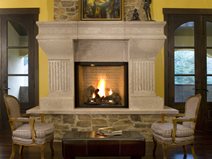 If it was possible to unearth an ancient Roman ruin and use it as a fireplace surround, then the Bentleys would have done it. For their new 7,000-square-foot estate in Gig Harbor, Wash., they wanted to create a commanding entry dominated by a massive fireplace surround having the grandeur of a Roman coliseum. Rather than summon the help for an architectural dig, they opted to create the look using concrete and the creative forces at Absolute ConcreteWorks. Using special molds and a dry-pack, hand-pressed method, ACW was able to recreate the look of ancient Roman columns with an eroded finish.

Stamping Tools Replicate Textures from Around the World

The old-world patterns of Paladiano, a new line of concrete stamping tools, were inspired by the textures and designs of pavements in historical European cities, including Athens, Paris, Barcelona, and Venice. The realistic textures and patterns replicate natural aged granite, limestone and marble. See more examples of Paladiano stamp patterns. 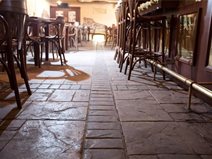 Imprinted Floor Creates the Feel of an Old-World Tavern

This concrete floor for a pub located in the historical center of Bucharest, Romania, was imprinted with an ashlar slate pattern and colored with a combination of cream, maroon and brown stains to create the feel of an old-world tavern. A brick pattern intersects the ashlar slate for added design interest. 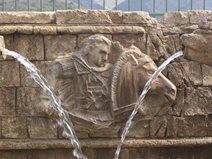 Themed Pool Gets the Look of Roman Ruin Walls

You’d never expect to see an ancient Roman aqueduct in the backyard of a Southern California home, until now. For these pool deck walls, Authentic Environments, specialists in relief sculptures of themed concepts, recreated the look in concrete. The design for the ruin walls took at least six months to complete. Complicating the project was the shape of the pool, which is curvilinear while the walls are symmetrical.