At nearly 17 feet long and weighing in at about 1700 pounds, Stone Soup Concrete has dubbed this single-piece concrete countertop the White Whale. Precast in their shop then delivered to the home, the size made the project unique. "The mold didn't take that long to build because it is not that complicated a shape," said Stone Soup's Mike Karmody." It just took more consideration in handling than normal. It was a very large piece and we took on the role of the Lilliputians in Gulliver's world."

In the shop, Stone Soup poured the White Whale on a long sheet of polypropylene mounted on plywood. "We can get sheets up to 20 feet long that are very smooth," said Karmody, "although in this case it wasn't critical to have a perfectly smooth mold because the whole thing had a light surface grind. The fines show slightly. We started at an 800-grit and finished at 1500; it's a really a very minor grind. We used a hand-held three-head planetary grinder."

Since the slab is 2 ½ inches thick, Stone Soup installed two layers of 6x6 remesh, top and bottom which would have allowed it to span gaps in the counters or to cantilever. "But this was one of the better cabinetry settings I've ever seen," said Karmody. "They assumed we wouldn't be able to span any gaps at all so they put a 2-inch-square tubular substructure underneath it and when we placed the countertop it did not deflect at all."

The concrete for this behemoth was made with white cement and included a titanium white integral pigment (from Murray Clark at B&J Colorants, www.blueconcrete.com), which makes it even whiter, and fiberglass fibers. Karmody and crew made three 600-pound batches simultaneously and placed the concrete as a monopour. "Using a good tight concrete mix helps to prevent any cracking," Karmody said. "Up to about 20 feet, though, concrete is going to be able to move relatively easily. Cracking is a risk but not a great risk since there is no restraint that could cause it to crack. And when we place the countertops on the cabinets, the adhesive we use is flexible and allows a lot of movement. In this case, though, it's so heavy that there's very little movement and we used very little adhesive."

The sink was formed using Plexiglas laminated onto a plywood mold. Karmody explains that they used plywood to get the basic shape then laminated the acrylic to the plywood, welded the edges, then polished it, starting at a 150 grit and finishing with a 1500 grit, then used rubbing compound to get it perfectly smooth. The sink is drafted about 3 or 4 degrees on the sides and the bottom tapers about ¼ inch to the drain point. To pour the concrete for the sink, he used what he calls a top hat--a mold for the outside of the sink. "It's essentially a collar that goes over the sink area and spreads out a few feet in each direction with stiffeners to makes sure the hydraulic head pressure doesn't push the concrete through. We place the concrete then vibrate normally, but by the time any concrete reaches the end of the top hat it takes so much pressure that very little escapes. As soon as the concrete is set up enough, we take the top hat apart—it's designed to be taken apart--and we can then get a good troweling on the underside of the sink."

Although in many cases the underside might be hidden, Kamody still sees importance in properly finishing the bottom of the countertop. "Having a good smooth bottom surface is really important especially to prevent snags to clothing like women's hose. The underside, which is our top side when we are pouring, may never be seen but if your customer looks and it's real rough, you have lost their confidence. It's got to feel good. And also, the smoother it is the easier it is to slide along the cabinetry during installation and the less likely it is to break."

The long depression that runs end to end on the White Whale is for a butcher block that rides in the track and right over the top of the sink. Note that the tracks continue on both sides of the sink. 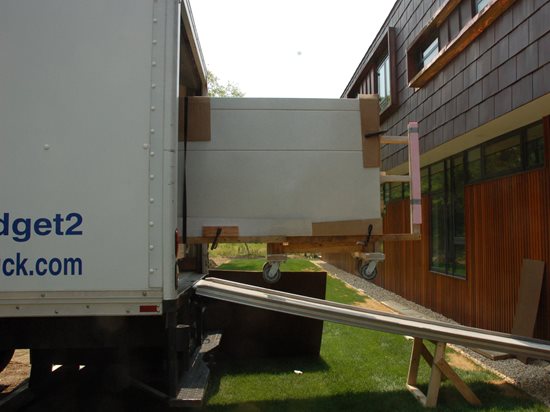 Stone Soup delivered the White Whale with only two people. "It's just a question of scale," Karmody shrugged, "it's bigger than you or me but it's not that big. Our delivery equipment lets us transport the piece on its side then allows it to flip down so that it's horizontal and around counter height. This is a large version of our standard delivery equipment. It allows us to get through a 27 inch door—on this site we had a 28 inch door! So we can get close to where it needs to go. In this case it's an island so we didn't have three boundary walls as we might on other pieces. To get it off the cart, because it had a sink in it and had to be lifted up and over and dropped down into the counters, I built a gantry system. This allowed me to hoist it up and then use the gantries to move it into position. Each gantry had 4 wheels so this allowed two of us to walk it into place and just drop it down."