Based in Lake Oswego, Oregon, Brian and Janet focus on creating custom concrete countertops and other elements for homes and offices using the durability and character of concrete.

Recently, they were contacted by Alina and Derek Norcom of West Linn Med Spa. "Alina was in need of an eclectic reception piece that made a cool, understated 'wow' to her patients and clientele," says Janet. "They couldn't find what they wanted for a reception table. They wanted something very natural, like a river," she explains.

Design and artistic element ideas started flowing from brainstorming, and research between the Creasy's and their client. "They had a laundry list of things to include," recalls Janet about the design phase. Some of the items included a water feature, rocky edge, lots of inlays, etc. "We believe less is more," says Janet, "so they ended up leaving a lot of this out, but we did include some foliage inlays with wood and copper accents. The key was to streamline the best options and create the signature piece."

Using computer aided designs and layouts, the Creasy's were able to illustrate a variety of options and colors in order to decide on the final piece. "We thought the colors and shape were distinctive in and of itself," explains Janet. The final functional art piece was an asymmetrical "S" shape emulating a river bed in two levels. "It includes several pieces of 'jewelry', our term for embellishments," explains Janet, "such as an integrated bowl for river rocks, imprinted samples of northwestern foliage and a rocky 'live edge' that only comes from the customability of concrete." It also incorporated a sand color on the bottom countertop and a blue color on the top countertop to coincide with a river theme.

The lower countertop is 9 foot by 3 inches long, 32 inches wide and was precast in two molds. "It was too long as one solid piece unless poured in place, which we prefer not to do," explains Brian Creasy. "So we designed it so that the two pieces could be pulled together mechanically with copper compressed in between to create a seam." The Creasy's also purposely mixed the bottom piece in a cold facility to give it a 'live edge.' "The 'live edge' creates the look of voids along the bottom edge. The look is similar to a river bed," says Brian. A maple leaf inlay was also put into the mold before the countertop was poured creating a personalized distinction along the edge of the countertop.

For the upper countertop, the clients decided on a glossy finish and the blue color called Tahoe. Cast in a single mold, the countertop is 6 foot long and has a cantilevered edge that extends 18 inches. "It's a bit long without support," explains Brian, "so we made a tripod of 1/4" copper rod which we pre-stressed, giving it an arch. We compressed it between the two surfaces to provide support."

To finish and preserve the pieces, a penetrating sealer and wax were used. Installed in the entryway of the medical spa, "the countertops are posted proudly on a custom cherry wood base with back lit copper logo and trim," points out Janet.

In the background on the wall is a shadow box that Janet and Brian made and gave as a gift to the client. "It has their logo on it with river rocks inside on the shelf. It's the same Tahoe blue color used in the desk and mixed with a charcoal color," explains Janet.

Coulee Concrete Designs revels in the services they provide, turning customer's dreams into realities while creating a useable, functional piece. According to Janet, "We like to celebrate in the true beauty of concrete, letting the material show us some of its distinct characteristics. Each piece is unique, something that we like to bring into the mass marketing of everyday living."

And whether it's transforming their passion into countertops, sinks, floors, fireplace surrounds or myriad other types of concrete elements, the Creasy's understand the infinite design possibilities of concrete. Together they create unique and timeless pieces that are both functional and artistic. 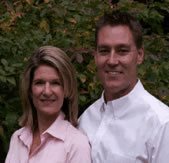