How Do Corrosion Inhibitors Work?

Corrosion inhibitors do two things. First, they extend the time before corrosion begins, and second, they tend to reduce the amount of corrosion that takes place.

They can be either anodic, cathodic, or a combination. Some work to create a protective barrier that stabilizes the layer of rust surrounding the steel, others provide a thin protective coating that prevents chlorides from reacting with the steel. Yet others provide inhibitors that react with the iron to form a protective film or coating that either prevents chloride from reaching the steel, or reduces the corrosion of steel by acting as an oxygen barrier.

What is Thermal Cracking?

Hydration of cement is an exothermic process meaning it generates heat. As the concrete cools it contracts and in extreme conditions may contract in three days as much due to cooling as it could in a year due to drying conditions.

A temperature differential of 35o F within 1 ft is usually considered enough to cause cracking. However, within 24-hours of placement, concrete temperatures can reach anywhere from 20o to 50o F hotter than ambient temperatures

Admixtures can work to alter the rate of heat generation but at the same time can result in lower concrete strengths. In mixes where low water/cement ratios are required for durability (such as bridges, parking structures or marine facilities), concrete is often substantially over-designed for strength. In cases like this, heat reducing admixtures can reduce the likelihood of cracking.

Plastic shrinkage occurs as fresh concrete loses its moisture after placement but before any strength development has occurred.

This type of shrinkage is affected by environmental effects of temperature (concrete and ambient), wind and relative humidity. It is a particular problem in hot weather concreting.

What is Autogenous Shrinkage?

This type of shrinkage is difficult to measure or separate from drying shrinkage which is a much greater concern.

Autogenous shrinkage takes place as the portland cement hydrates and without loss of water from the mix as opposed to the drying shrinkage process. Admixtures may reduce this type of shrinkage but are not specifically designed to do so.

What to Ask When Considering Using Shrinkage Reducing Agents?

Before using a shrinkage reducing agent, ask the manufacturer how it will affect your project and materials.

Are There Cost Tradeoffs When Using Shrinkage Reducers?

The cost of adding shrinkage reducers to concrete can be compared to the advantages of not having to either repair or retest.

This can be particularly important if the project is construction of a concrete water tank or reservoir. Passing the required hydrostatic test the first time more than offsets the cost of using the admixture.

Other examples of cost savings could relate to expansion joints, number of prestressing strands required, or reduction in curling of floor slabs.

In addition, in projects where a cheaper high shrinkage aggregate cost must be compared to a more expensive better aggregate, the cost of improving the concrete by using shrinkage reducing admixtures should be included in the cost comparison. 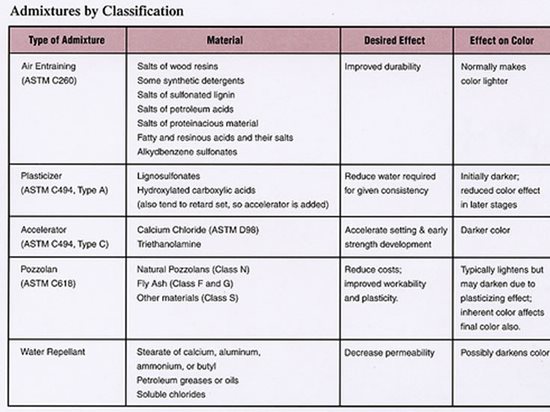 For decades, the rule of thumb has been that the only admixtures that should not be used with integrally colored concrete are calcium-chloride-based accelerators. The chloride ions attack the color, causing it to fade and turn blotchy.

While all other admixtures have been tested and found to have no long-term detrimental effects on colored concrete, they may shift the color lighter or darker. This makes it that much more important to maintain batch-to-batch consistency.

Contractor-Pak Contains six of our most effective admixtures