The COLUMN CAST™ is a re-useable forming system that encapsulates a styrofoam shape to provide support while the concrete is poured and curing. It's a highly efficient forming system to replace rotting wooden posts with decorative concrete in 1/10th the time with no tools and no mess.

Once the concrete has sufficiently cured, the COLUMN CAST may be relocated to support another column form. The styrofoam will remain inplace from the first pour until curing is sufficient and the detail is ready to strip from the concrete. 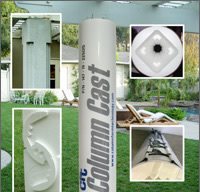 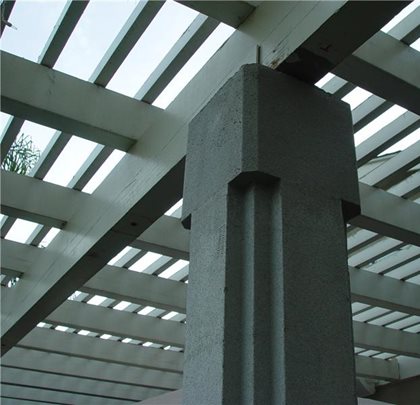 The initial launch of the Column Cast System™ will focus on replacement of rotten wood patio and fence posts. This is obviously a huge market being that nearly every home has a front or rear patio, entry columns, a pergola, gazebo or all of the above. Most of them were initially made of wood, and most of them have already begun rotting and are in need of repair or replacement.

This process will greatly reduce the set-up, pour and strip time, as well as eliminate the need to purchase and build single-use cardboard or wood forms. There are no power tools required for this operation.

With the Column Cast System™, available column shapes are unlimited. With the proper release agent the styrofoam form can also be re-used.

Learn more about the Column Cast System and distribution opportunities at World of Concrete Booth S22125, or call Column Form Technology at 866-821-2278