A Solution for Coating High-Moisture-Content Floors 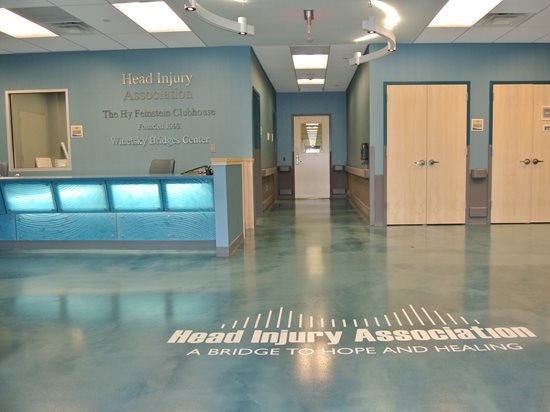 A trio of products from Duraamen allowed a
high-moisture-content concrete floor in
the headquarters of the Head Injury Association,
Hauppage, N.Y., to be restored with a decorative metallic epoxy coating.

It’s hard to beat epoxy concrete floor coatings for their durability and abrasion resistance, making them ideal for high-traffic commercial applications. However, a big drawback of most epoxies is that they don't breathe and will trap moisture vapor coming up from the concrete slab. The good news is that it’s still possible to apply decorative epoxy coatings to floors with high moisture vapor emission rates using a system of products from Duraamen Engineered Products.

Recently, Garage and Beyond of Englewood, N.J., used the system on a 13,000-square-foot concrete floor at the headquarters of the Head Injury Association, Hauppage, N.Y., to address a serious moisture problem. “The existing building was perhaps 20 years old. During the site visit, we smelled dampness and recommended conducting moisture vapor emission tests. Our readings were 8 pounds per 1,000 square feet in 24 hours, and the GC’s results were 12 pounds per 1,000 square feet. Perdüre MVT+ was installed at a thickness of 1/8 inch to take care of the moisture problems,” says Victor Pachade of Duraamen. 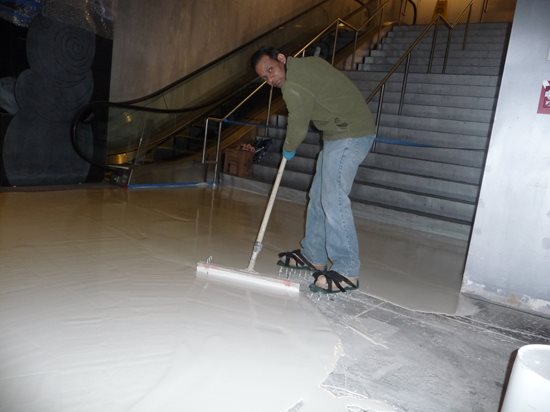 To take care of the moisture vapor problem in the floor, Perdüre MVT+ was applied at a thickness of 1/8 inch.

After applying Perdüre MVT+, installers were then able to coat the floor with Duraamen’s Lumiere, a designer epoxy flooring system that contains reflective metallic pigments. This was followed by a topcoat of Perdüre U90, a two-component, moisture-cured polyurethane that offers excellent abrasion, chemical and stain resistance. For this project, Perdüre U90 with a satin finish and nonskid additive was used. 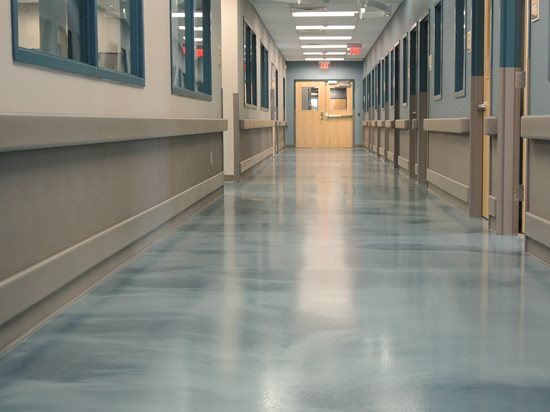 Next, Duraamen’s Lumiere reflective metallic epoxy, in a blend of blue and aluminum, was applied to give the floor a highly durable designer finish. The final step was to topcoat the floor with Perdüre U90, a two-component, moisture-cured polyurethane in a satin finish.

“Perdüre U90 cures by reacting with the active hydrogen present in the moisture in the atmosphere, offering superior color appearance, abrasion resistance, and stain resistance. It is also quick drying and applicator friendly because it has a 60-minute pot life. Contractors also love the glasslike appearance, unlike many other water-based polyurethanes which may have an orange peel look,” says Pachade.