Plank stamping patterns have been available for many years, but Allstate Decorative Concrete in Cokato, Minn., by incorporating that pattern into all of the porches and decks around this house, has tied the landscaping into a harmonious whole.

"Our local concrete company, Cemstone, designed a mix for us so we can pour as thin as 2 inches over wood," said Allstate's president Lonny Mattila. "They framed the porch and deck with 2x10s and put plywood over it then we installed 2 inches of concrete. This gives them a deck that's about as maintenance free as you can get. All they'll ever have to do is power wash it and reseal it every 3 years or so. You get the weathered wood look right from day one and it never changes." 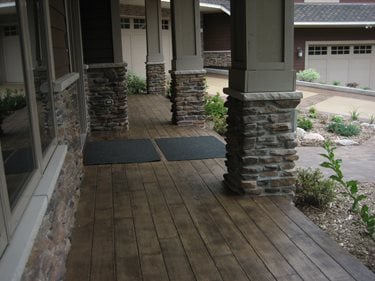 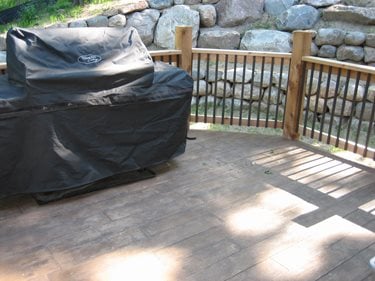 The plank pattern extends from the porch and down the sidewalk to form a border for the large driveway. Mattila's crew laid out all the forms for the borders in a day and a half, carefully checking dimensions. "There was a lot of messing around with that driveway," he said. Reinforcing steel is used throughout and bulkheads between placements are notched so that the steel extends through to tie the sections together. "Everything is 100% tied through." 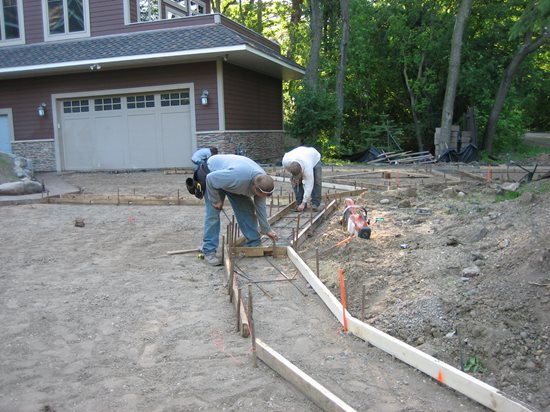 To meet the schedule, Allstate placed all of the borders at once. With the forms in place, it became impossible to drive a ready mix truck close enough to place the concrete directly from the chute, so it had to be placed from wheelbarrows using ramps to jump the forms. "The boys weren't too happy about that," said Mattila, "but I wheeled the first load, so they couldn't complain too much. We could have done some of the borders and some of the driveways and avoided the wheelbarrow but we were on a pretty tight schedule since we'd just had three weeks of rain."

The concrete for the planks has an integral color and 6% air. "We use microfibers and rebar," Mattila said. "I don't trust the fibers by themselves, but they do hold popouts and add strength. In the summer when the concrete wants to dry too quickly, the microfibers help a lot with shrinkage cracking."

To stamp, Allstate crews applied a Scofield Lithochrome powder release in a contrasting color. At the edges, where the stamps ride up onto the bulkheads, they used a sharp beveled joint roller to create the pattern and then a floppy to get the texture. The stamps are Scofield's Lithotex Pavecrafters Pine Interlocking Plank. "We own them," said Mattila. "They're OK. I've never used another wood pattern but I've heard that Proline has one that's maybe a little easier to work with. But I was already $3 grand into these stamps so it's too late to change now." 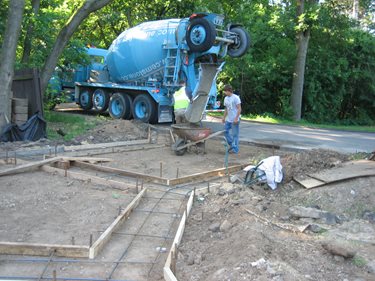 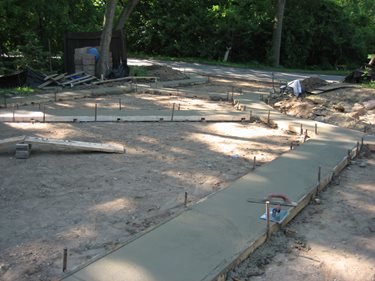 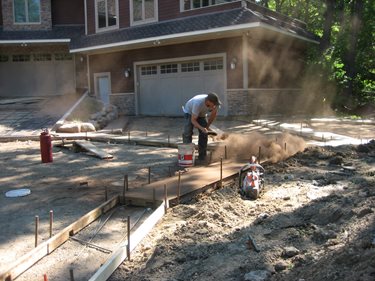 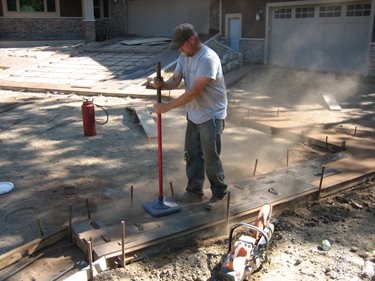 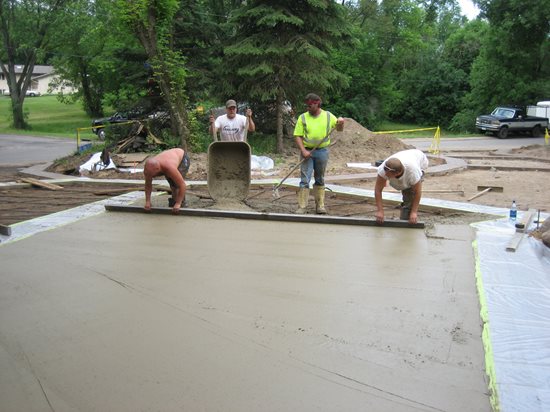 "I had seven or eight guys there," Mattila said. "That was enough that we were able to get everything stamped. On one load we were already stamping when they were still pouring on the other end. We were done finishing long before they were done pouring so then some guys would drop back and start stamping." The weathered look on the wood planks is achieved through washing off the release. "We generally wash the next morning," Mattila said. "We turn the pressure down and that's how we get it to come off more clumpy like that. A lot of people let it sit for a week. The longer you leave it the more it sticks and the more even it comes out. But if you wash early you have to really be careful because you can overwash it. We figured this out when we were forced into washing a floor early and it worked out like that and we've been doing it ever since."

Once the borders were complete, Allstate workers taped off those sections." The tape we use I buy from our local auto parts store," said Mattila. "It's actually intended for auto body work. It comes up pretty clean and sticks real well too."

The infilled driveway areas were placed using a concrete with an integral color then broomed. "We picked the closest color we could find to the color of his garage doors." 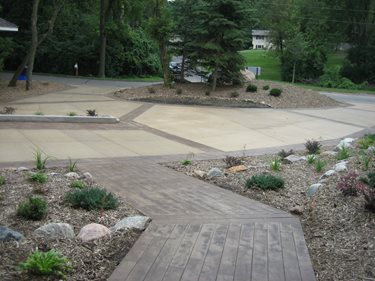 Learn more about how concrete can mimic wood