To add style and flair to an upscale custom home, a builder uses a stenciled concrete overlay to dress up an enclosed porch Project submitted by Dana and Brooks Tucker, Bella Tucker Decorative Finishes, Franklin, Tenn.
By Anne Balogh, The Concrete Network
Swipe to view slides

Design goalsExpecting thousands of people to come from miles around to view their newly built home in Brentwood, Tenn., Castle Homes of Nashville wanted to impress with the best. The $1.2 million French Country style home, built for Southern Living's 2011 Showcase Home, wowed visitors during its open house in October with the latest ideas in home design, green innovation and new building products. One design element that generated a lot of oohs and aahs was a custom stenciled concrete overlay on the floor of the home's enclosed 400-square-foot porch. "This floor was definitely the buzz of the home," say installers Brooks and Dana Tucker of Bella Tucker Decorative Finishes. 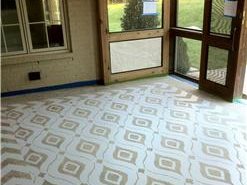 The stencils used include an ikat pattern bordered by a chevron motif. With the stencils in place, the floor is now ready for the final coats of microtopping.

Castle Homes decided to go with decorative concrete flooring because of its longevity, aesthetic appeal and use of low-VOC materials, qualities that fit with their design goals of using innovative, sustainable building materials with exceptional style. But at first, it took some convincing.

"Because this was a showcase home that would have thousands of people coming through, there were a lot of companies willing to do whatever it took to be included in the project. A concrete paver company was really pushing the builder to put in a blue stone paver porch instead of the poured concrete porch. We really had to sell the builder on the unique properties of the stenciled concrete overlay," says Dana.

Secrets to successBecause the concrete floor slab was newly poured, a base coat of primer was all that was needed to get the floor ready for the overlay. However, the Tuckers had to wait 30 days to allow the concrete to fully cure before they could start the job. "We had to work on a super-tight deadline to finish the floor before the showcase house opened. There were a couple of nights that the guys worked until 2 a.m. in the morning," says Dana, whose husband Brooks worked alongside Pablo Johnson of Rudd Company over the course of five days to apply the microtopping.

To achieve the look of a faux-finished area rug, the Tuckers used Rudd's SkimStone, a hybridized portland cement microtopping, and two custom stencils from Modello Designs, one that emulates ikat (a dyeing technique used to pattern textiles) for the main "rug" pattern and a chevron stencil in an inverted V-shape for the border. A sophisticated tone-on-tone color scheme in shades of cream and gray made the pattern come to life.

The microtopping was applied by trowel in five thin layers to achieve a textural effect. The first layer to go down was SkimStone Industrial Gray, followed by two more coats in a custom blend of Moroccan Sand and Oyster Shell. At this stage, the adhesive-backed Modello stencils were applied to the floor and then covered by the last two coats of microtopping in a blend of Mocha and Oyster Shell. After removing the stencil to reveal the pattern, Brooks and Pablo applied three coats of a water-based urethane sealer to protect the floor and add a beautiful sheen.

The Tuckers launched their faux finishing company about six years ago, and soon became hooked on the versatility of concrete overlays. "We quickly learned that if we were going to break through the pack of all the faux finishers in the area, we were going to have to showcase unique finishes that other people were not doing. The floor we did for the Southern Living Showcase Home was a huge step in that area because we were able to create awareness with the 7,000 people that came through the house," says Dana. That awareness is about to grow exponentially, because Castle Homes loves the floor and is looking for future opportunities to use it.

See how it was done
Watch a video of Brooks and Pablo installing the stenciled overlay.