If your basement walls are beginning to bow, crack or allow water intrusion, the cause is likely due to changes in soil pressure. In much of the country, soil pressures vary by season and variations in moisture, which can cause the walls of basements to be pushed inward. Like wobbly table legs, failing basement walls can severely compromise the integrity of the structure resting on top of them.

“Basements are extremely vulnerable due to the amount of pressure placed on the walls by soil and water. As the population increases, so does the use of these systems,” says Randon Gregory of Ram Jack Systems, a company specializing in wall tiebacks and other engineered foundation solutions. “We install many tieback systems north of the Mason-Dixon line, where the majority of homes have basements.”

The most obvious signs of bowed basement walls include cracks and walls that lean inward. Although carbon-fiber reinforcement has been used successfully to strengthen basement walls, it does not remove the pressure causing the damage in the first place. Instead, it transfers it to other portions of the wall. “Carbon-fiber reinforcement is widely used when there is only a small amount of damage. Helical tiebacks should be used in cases of moderate to severe movement and are often accompanied by the use of carbon-fiber systems,” says Gregory.

How Wall Tiebacks Are InstalledHelical anchors are commonly used in the repair of both concrete retaining walls and basement walls, transferring tension loads from the existing foundation to a soil suitable for the load. In order to stabilize bowed basement walls using tiebacks, it’s necessary to relieve the pressure pushing on the walls by removing the soil around them. The helical tiebacks can then be installed into deeper soils that will resist the pressure and allow the walls to be pulled back into alignment. After the tiebacks have been installed and the walls are held in place by the helical piling, the hole is backfilled with gravel, which does not exert as much pressure as soil does when soaked with water. This reduces the force on the walls to help prevent future bowing. 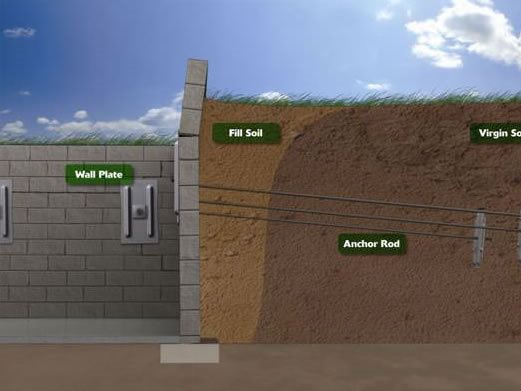 "Helical tiebacks are advanced into the soil away from the area placing pressure on the wall, then pull against the interior with a wide plate to spread out the load. This stabilizes the wall by providing enough resistance to negate the outside forces," Gregory explains.

Before considering the use of helical tiebacks to fix bowed basement walls, be sure they are suitable for your location and soil conditions. “In some cases, tiebacks are not allowed due to property lines, because installation may require extending them 20 feet or more. If there is a neighbor with a basement closer than that, you may not be able to install a tieback system. Also, areas with dense rock are not favorable to helical tiebacks,” says Gregory.

What Does It Cost to Repair Bowed Basement Walls?The cost of foundation wall repair can vary widely depending on the extent of the damage and the materials and methods used. Gregory suggests homeowners obtain several evaluations and estimates from reputable contractors and compare value, not just installation costs. More information about foundation repair costs and comparing estimates is available on the Ram Jack website.