A custom-engineered log cabin in West Virginia is built with materials expected to last more than a century, including stained concrete floors and countertops. By Bob Harris, The Decorative Concrete Institute, Temple, Ga.
Swipe to view slides

To the place where John Denver belongs, West Virginia, is where we recently found ourselves helping clients and friends, the Ahern family, on some very interesting decorative concrete applications. "Country road" hardly describes the arduous journey to ultimately get to the Ahern country cabin, which is located on more than 200 acres in the middle of 10,000 acres of national forest between the cities of Cass to the south and Durbin to the north, with a beautiful stream to the east and a sprawling mountain range to the west.

When Jim Ahern, an engineer by trade and successful heavy road and bridge contractor, took on the daunting task of building this beautiful cabin, he had very explicit structural and design criteria to adhere to. "The cabin was constructed with a minimum of a 100-year life expectancy, so five generations of Aherns could enjoy the cabin," he says. The vision that Jim and his wife Chris had was that their grandchildren would talk about this special place to their grandchildren, who would then tell their children about the cabin that their great great grandma and grandpa built.

That meant, of course, using materials that would last several lifetimes, including natural stone, sturdy white pine logs, and concrete floors and countertops.

Cabin design and construction
The cabin has three levels. Levels one and two are roughly 2,500 square feet each, with level three consisting of a loft and office totaling 1,500 square feet. When I asked Jim what his inspiration was for this unique design, he said it all started with the stone fireplace that he designed himself on his computer. "I developed the fireplace first, and then built the log house around it," he explains. "We knew we wanted a steep roof, which ended up being a 40-foot ridge beam height from the floor to the roof. The weight of the fireplace was phenomenal, considering the amount and size of the stones."

Jim calculated that his fireplace, which also has two flues, weighs in at a whopping 500,000 pounds. The stones he used came from a project he was working on outside of Columbus, Ohio, which involved tearing down an old bridge built with the best cut stone he had seen in his 40-year career. "Instead of disposing of the stone, we hauled it to our yard outside of Dayton, Ohio, before its final resting spot on our property in West Virginia," he says. That resting spot ended up being a concrete slab poured to the exact dimensions of the fireplace footprint.

As if the fireplace isn't spectacular enough, it is complemented by beautifully colored rock-veneered columns throughout the cabin that are impressive on their own. Constructing this massive work not only took plenty of ingenuity but labor as well. One of the biggest challenges, says Jim, was finding quality craftsman because of the location being so remote.

The logs used to build the cabin are 18-inch-diameter northeastern white pine, handpicked and peeled in Maine. "We went around with four different loggers and showed up twice a day to pick logs, then hauled them to a barn in Ohio and seasoned them (dried them out) for 18 months," says Jim. Once the logs were placed, the next step was to "chink," or fill the gaps between them, with mortar. "There are a lot of elastomeric caulking options, but we wanted to use a more traditional method. You need to be concerned about shrinkage, so we developed a mix design that included coarse sand, cement, glass reinforcement and liquid latex in place of water, placed over metal lathe between the logs. We spent quite an effort preparing this mix design, which worked out great," he says.

Stained concrete floors
Despite plenty of other flooring alternatives, Jim chose stained concrete both for its beauty and ability to distribute radiant heat. "With a log home, you don't want forced air heat on the logs because it will cause isolated drying, so the best heat to use is radiant. The best way to distribute the radiant heat is through a concrete floor," he explains.

Radiant heating cables were embedded in the concrete floor slab. The Aherns opted to use radiant heat instead of forced-air heating to prevent uneven drying of the logs.

Jim didn't want to cover the concrete floor because it would insulate the heat and prevent it from radiating upward. "As a part of being a bridge builder, I went regularly to the World of Concrete and read a lot of magazines, including Concrete Construction, with information about decorative concrete and acid staining. Then one year at WOC, I saw some of the end products of the decorative world and the next year I went to Bob Harris's seminar on acid staining. That is when I really came down to the concept of an acid-stained floor while getting all of the benefits of a radiant-heated slab."

This led the Aherns to consult with me about acid staining his floors, and that's when I became involved in the project. When it came time to choosing colors for the stained floor, we started off by sampling in the Ahern's garage on a roughly 200-square-foot area. We used a combination of various techniques, including layering stains in addition to the use of dyes. One of the main considerations was to play off of all the colors in the fireplace. We ultimately chose Kemiko's Malay Tan and Vintage Umber acid stains, sprayed wet on wet. Once the floor was cleaned and neutralized, everyone liked the color, but we were asked if we could combine red hues with the previously stained surface. We then sprayed on DCI's Ruby Red solvent-based dye as an accent color.

One of the unique features of the floor is a custom graphic, which was designed by Jim's daughter, Maureen. "It is difficult to get a perspective of where we live," he says. "Now on our floor are pictures depicting geographical references that are also identifiable with the words, such as Durbin (city to the north), Mountains, River, and Cass (city to the south)." The logo was stenciled onto the floor, using various colors of tinted skim coats. The floor was then sealed with epoxy to lock down the colors while providing a high gloss.

Cast-in-place concrete countertops
After many discussions regarding the types of countertops they wanted, the Aherns decided that concrete would really lend itself to the interior décor and massive feel of the rest of the cabin. They had visited our facility in Temple, Ga., and were really drawn to a concrete countertop we had on display. The techniques we used on their countertops were based on this look, although the color scheme was different.

The cabin's concrete countertops were formed and poured onsite and reinforced with ladder wire. The bi-level countertops consist of six individual pieces. 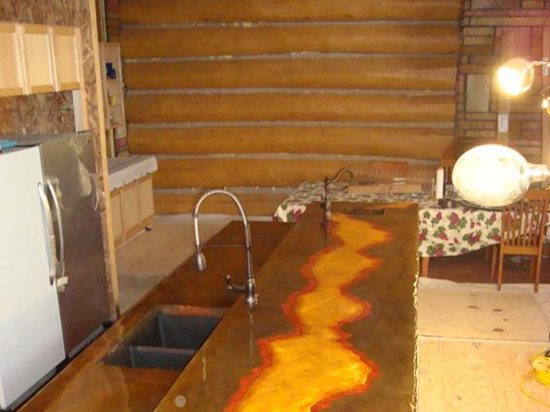 I asked the Aherns what their main objectives were for choosing concrete and they said they wanted inconsistency in the finish and uniqueness. "Because we are so rural, we had low confidence that granite would be an option to get here and be installed," says Jim. "In addition, there is no one piece of granite that is 16 feet long and 3 feet wide. And we had a vision of a seamless countertop with unique characteristics. We knew exactly what we wanted, and felt that we needed to cast it right here at the cabin."

Jim had built plenty of impressive bridges in his career, but never a concrete countertop. The forming of cast-in-place counters can be a challenge, especially around the sink knockouts. After a few phone consultations with me and several emailed photos as a reference, Jim and his crew did a very commendable job of forming and prepping for the pour. Then my wife Lee Ann and I made one more trip to his remote cabin in the woods to help out with the installation of the countertops. After a long night of reinforcing and masking, we were ready for the big pour the next day. There were a total of six individual pieces that took two days to complete. The rest of the week consisted of coloring, engraving, applying metallic epoxies and sealing of the countertop surfaces.

On the upper kitchen counter, we used the EnCounter bagged concrete mix, and roughly three hours after the installation, we applied a white microtopping for the vein, which was applied over the edge of torn paper. The following day, we engraved the edge of the microtopped vein to create a small void. On this counter as well as the other five, we used solvent-based dye applied freehand with a cup gun sprayer. The small engraved veins were filled with copper metallic epoxy, and then the counters were coated with two coats of clear epoxy and a final coat of polyaspartic to provide the highest gloss possible, as well as a durable surface.

Once the countertops were complete, it was impressive to look around the cabin and notice how cohesively the variety of different colors and materials seemed to blend together. This was a very special project to be a part of.

If you have questions about the construction of Jim's log cabin, he can be reached at jimwv@cs.com.