Soil plays and important role when pouring footings, here's how to make sure it can carry the load By Brent Anderson, P.E.
Updated June 30, 2020

In addition to providing a level platform for forms or masonry, footings spread out the weight of the house so the soil can carry the load. The load spreads out within the footing itself at about a 45-degree angle, and then spreads out in the soil at a steeper angle, more like 60-degrees from the horizontal. 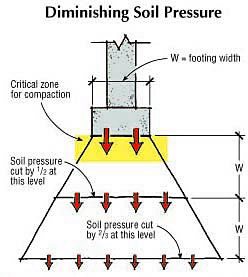 As the load under a footing spreads out, pressure on the soil diminishes. Soil directly under the footing takes the greatest load, and therefore should be thoroughly compacted.

Find nearby slab and foundation contractors to help with your footings.

When we excavate for the footings, the teeth on the bucket stir up the soil and mix air into it, decreasing its density. Also, soil from the embankment may fall into the trench. Soil that's loose has much less bearing capacity than the original soil.

That's why it is so important to compact the trench bottom. Use a vibrating plate compactor for sand or gravel soils, and a jumping jack compactor for silt or clay (learn more about compaction equipment in this guide to subgrades and subbases). If you don't compact that soil, you could get 1/2 inch of settlement in just the first 6 inches of soil.

If you dig too deep and replace the soil to recover the grade, you are adding back soil that has expanded by as much as 50%. Under load, it will reconsolidate and cause settling. So when you replace material in the trench, compact it thoroughly, or else use large gravel. One-inch-and-a-half or larger gravel is virtually self-compacting as you place it. Under the weight of a wood house, it won't settle to any significant degree.

Learn how to span soft spots in the soil.

The type and density of the native soil is also important. The International Building Code, like the CABO code before it, lists presumed bearing strengths for different types of soils. Very fine soils (clays and silts) typically have lower capacities than coarse granular soils (sands and gravels).

Check soil density in a footing trench using a penetrometer. The bearing capacity of your soil will help you determine if you need a shallow foundation or deep foundation. Soil strength directly under the footing, where loads are concentrated, is crucial to foundation performance.

You can get a pretty good idea of the soil bearing capacity in the trench bottom using a hand penetrometer. This pocket-sized device is a spring-loaded probe that estimates the pressure the soil can resist and is calibrated to give readings in tons per square foot. Every contractor and building inspector should have one of these. It can help you avoid a lot of trouble.