Glow in the Dark Concrete

Creative use of phosphorous gives illumination to concrete surfaces both indoors and out By Khara Dizmon, ConcreteNetwork.com Managing Editor

Whether it's for illuminating walkways or steps for added safety or just for pure ambiance, turn down the lights, save on electricity, and install some glow in the dark concrete."Don't imagine that tacky, green, Halloween-type stuff," says Keith Campbell, owner of Crafted Concepts in Huntsville, AL. "It's a subtle glow that doesn't hurt the eyes." View the slideshow below to see examples of glow in the dark concrete and to learn about the process of installing it. 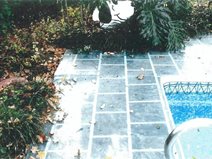 Keith Campbell first started installing glow in the dark concrete in 1998, and pioneered how to embed phosphorous into an acrylic sealer to be used in conjunction with a modified polymer cement compound. Since then the word has spread. "I used to have to tell people about it. Now they've seen my work or heard about it and they're requesting it," he says. 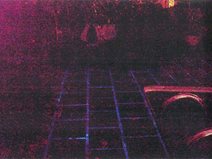 How does it work?

The phosphorous gets its energy from incandescent or natural sunlight explains Campbell. It's bright enough inside to see how to get around so it can be used to line hallways or exit routes. "But some people just want something different," Campbell says since the majority of his clients request it for its uniqueness on the floor, pool deck, entryway, and even countertops. 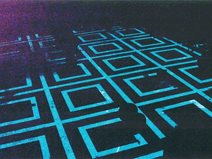 How much does it cost?

Campbell typically adds $1-2 more per square foot for glow in the dark concrete. 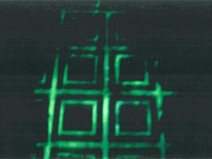 In the daylight, the phosphorous is not noticeable. 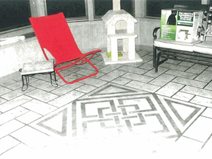 Among many of its green features, the home includes recycled glass countertops by EnviroGLAS. 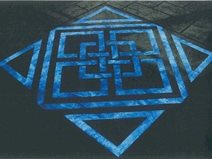 How is it applied?

Campbell uses a modified polymer cement compound to overlay existing concrete. "We cover the area with a basecoat of color. This color becomes the grout line if we apply a pattern to the concrete," he explains. The basecoat is then sealed with an acrylic sealer with phosphorous in it. "Next, we tape off the pattern," says Campbell, "and hand-trowel in a topcoat color. When we pull up the tape, we seal again with the acrylic sealer without the phosphorous in it. That way only the lines glow and not the topcoat." This technique gives the brightest illumination in the patterned lines of the surface.

Campbell says he can also hand-trowel the top coat to a thinner consistency revealing some of the phosphorous specs throughout the entire slab. It can also be applied to newly poured concrete if it is broadcast and sits on top of the surface. Campbell has also used the phosphorous with a water-based sealer, and says it can be embedded in epoxy or paint. "It comes in a fine powder which is what I typically use to mix with my sealer," he says. "It's also available in various aggregate sizes which is similar to what Bob Harris used on the floor project that was made to look like a stream." 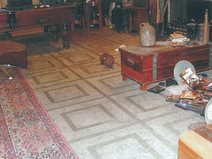 How is it applied? 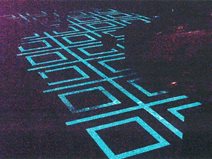 Here is the illuminated photo of Campbell's home interior floor.

Learn about Glo-Kote, a thin-set overlayment product for glow in the dark concrete from Super-Krete. 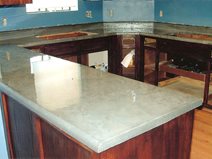 This countertop looks normal during the daylight hours.

At night glow in the dark aggregates bring it to life.