Concrete's versatility was surely illustrated this year at the 2008 ASCC convention held in San Antonio, Tex. Built to one-third the scale of the original Alamo, vertical concrete was used to recreate the historical building. The Alamo replica was created with Fossilcrete vertical concrete mix, provided by Specialty Concrete Products. 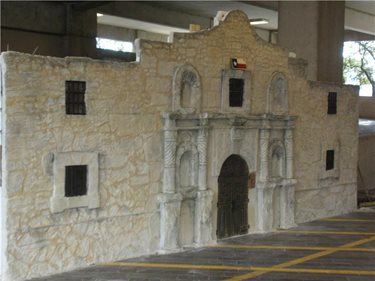 According to Shellie Rigsby who helped build the mock-up, "We started with ICF blocks to build up the body of the structure. Then we used sheets of foam to build up the structure details. We attached the foam, then applied a primer, then a scratchcoat, then a carvecoat which is ¾-inch thick. We put it up without pigment because the Alamo itself is light colored." The façade was built completely from scratch and was finished in four days.

The project originated with Frank Lewis and the ASCC and was coordinated by Wes Vollmer of Alternative Finishes. Rigsby made three trips to the Alamo to study it and evaluate how to accomplish as close a likeness as possible without being right next to it. She took 300 photographs. "We posted these photographs," she explains, "and worked from them. Where the stone is flat or smaller or rounded, we reproduced those details in the concrete."

SureCrete's Eco-Stain was used to color parts of the replica. "It's workable like a glaze," says Rigsby. "The color was only used to show age and weathering, to show where dirt had run down the side just as it looks on the real Alamo. We used the colors black and green to recreate the dirty, mossy look."

The structure is 20-foot long by 10-foot tall. Once completed, it was taken to be displayed at a local college in San Antonio, and now resides at a new San Antonio Harley-Davidson dealership. The project made the 10 o'clock news and attracted the attention of many locals who stopped to admire the work.