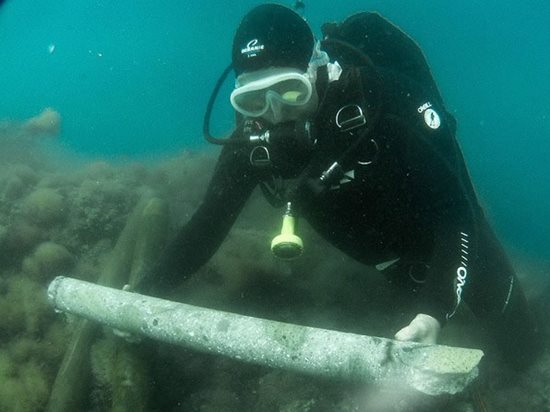 A diver collects a sample of Roman concrete.

It’s no secret that the Romans were great builders. After centuries of weathering and use, many of their buildings still stand today. Recently, researchers at UC Berkeley had the opportunity to study samples of Roman concrete taken from a harbor near Naples, Italy. This study shed new light on why Roman concrete is both stronger and greener than the concrete we use today.

The Romans’ recipe was essentially lime, volcanic ash and salt water. The interaction between these ingredients produces calcium aluminum silicate hydrate (CASH), which is the bonding material. The study also revealed that Roman concrete contains tobermorite, a material with a highly organized and very strong structure of molecules.

Researchers also found that the Roman process for creating concrete releases less carbon dioxide than today’s method. Portland cement requires an extreme amount of heat to produce, while the Romans used a naturally material, volcanic ash. We have experimented with using volcanic ash, and more commonly, fly ash, to replace Portland cement, but until now there was no way to know how strong this type of concrete would be.

Even though Roman concrete is stronger and has less impact on the environment, it is not likely to replace our modern version. Their concrete did not dry as quickly as that made with Portland cement, and time is money on many projects. What the Berkeley researchers hope is that the concrete industry will take a look at their practices and possible learn something from the Romans.

This research was posted online on May 28, 2013 in the Journal of the American Ceramic Society. The research team was led by Paulo Monteiro and Marie Jackson of UC Berkeley.

Learn more about the history of concrete