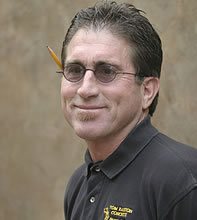 It's fairly common for a business to be affected by the last few years' economy, but pretty rare for a business owner to be honest about the situation. But as Tom Ralston, president of Tom Ralston Concrete in Santa Cruz, Calif., has learned, by being honest he's been able to tackle the tough obstacles, coming out the other side stronger as both a manager/business owner and an individual.

As recently as two years ago, Ralston employed as many as 70 people at his company, but by 2004, he was down to approximately 50 people, due in part to some big contracts that fell through, as well as the fact that many other businesses were going bankrupt, the Silicon Valley bubble had burst, and the economy was down.

"Just last year the economy started recovering," he notes, "and as Silicon Valley recovered, so did we."

Part of what helped Ralston make it—and not have to resort to bankruptcy—was setting his company up solid by incorporating good marketing, good people and good systems.

But people are definitely the key to success. Says Ralston, "If you don't have the right people, nothing else matters."

In 1989, Ralston took over the company helm from his father, Jim, bringing his creative flair, which also altered the company's focus from traditional concrete projects to modern, decorative concrete stamping, staining and one-of-a-kind structural projects for residential and commercial clients. (The company was founded by Ralston's grandfather, Wilbur Thomas Ralston, in 1928.)

Things were up and down as recent as one year ago, when the company entered 2005 losing money but by March were climbing out. The spring of 2006, with its record rains, stalled the upturn of business, but Ralston says he's back on the road to recovery.

For someone who's been in the decorative concrete industry going on 16 years, Ralston has been able to assemble a core group of employees he relies on to help him carry the load, a group whom he also showers with "bucket loads of enthusiasm" on a regular basis.

"We are fortunate to have each other in this company," he explains. "I made them a promise to hang in there in the tough times, and we'll make this a great company."

Because his philosophy is to treat his employees fairly and with respect, it's no wonder he has a following. Ralston also acknowledges the importance of recognizing his employees on a regular basis with things like "Employee of the Month."

"It hasn't been the big bucks I've retained them with, it's mutual respect," he adds. "Certain people you just won't have chemistry with, and it takes a while to weed those individuals out who don't respect you or your company....and you're left with those who have the same goals."

Ralston is also a unique leader in that he shares the big picture of the company with his group, whether that picture is good or bad.

"I try to identify what's important, set goals and create a company culture with lots of praise and respect and fair treatment," he explains. "I talk about long-term goals with my employees, and talk to them honestly about the situation."

In addition to retaining employees with public recognition, which Ralston admits he can't do enough of, he also ensures that raises and bonuses are at the top of the list of priorities.

The other set of individuals Ralston wants to keep happy are his clientele. "The decorative concrete contractor has a rough go trying to keep everyone happy—customers can be finicky and have high expectations," he notes.

The company philosophy is to put a smile on every customer's face by providing friendly service and quality work. Ralston says they take pride in delivering the best possible product and service available.

With plenty of energy and enthusiasm for decorative concrete, Ralston is dedicated to the industry and is a frequent speaker and trainer of decorative concrete techniques at industry conferences and seminars, including CONEXPO and the Decorative Concrete Council. He's also been a member of the American Society of Concrete Contractors Management Information eXchange (MIX) Group for six years now, where Ralston says he represents the smallest contractor in his group at $3 to 5 million per year.

He's also just completed a book on concrete countertops and is in talks with an agent at Hanley Wood. Ralston says the idea came to him almost three years ago, and he's been working on it here and there ever since.

However the book is used, Ralston knows there's an audience for it—he says his concrete countertop lecture at the 2006 World of Concrete was the largest of all the seminars and drew 502 paid attendees.

Finding the silver lining in being pulled in many different directions, Ralston has also turned being sought after into a chance to travel and explore other places. When he isn't consulting in Florence, Italy, he's off to New York City to consult on a 15,000-square-foot home for a rich and famous (and wishing to remain anonymous) client, then heading to Atlanta and Palm Springs to share his knowledge with others.

Crediting piano and voice lessons, as well as surfing, golf, travel, yoga and writing and recording songs with keeping him sane during some extraordinarily the low points, Ralston says, "What I've been through pushed me to the brink—it forced me to do something healthy and spiritual or I'd collapse. I came through it so much stronger emotionally and I have a stronger business...World, bring it on, I'm ready!"