Pulling Off a Bank Job Requires a Few Accomplices

by Steven Ochs with Images In Concrete in El Dorado, AR Concrete Mural Video
Time: 01:21
Arkansas contractor and art professor transform the entrance to a bank with a creative concrete mural. 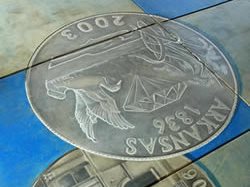 My advanced art students at Southern Arkansas University had just completed an interior design proposal for the University's library when we got a phone call from the Farmers Bank and Trust in nearby Magnolia, Ark. This was the centennial anniversary for this local bank and the perfect time to create something special for the community as part of this historic celebration.

I met with Molly Burns, the bank president's wife, to collect information on the origins of the bank and what specific resources, trades, and people were key to its earliest success. The site was identified—the entry to the bank—and a detailed scale drawing was produced. We also photographed, sketched, and took notes on existing designs and materials in close proximity. These elements might be used later to help unify the design within its environment.

With all this in hand, the students sketched concepts that ranged from timber and oil industry highlights to portraits of pioneers. Even in this early stage, I find it helpful to work on copies of the scaled site drawings. Visualizing the space accurately is important so that when a particular design is chosen, there are few surprises. In other words, what you see on paper fits on the floor.

The concept that the Bank's committee and its employees enjoyed the most was a handful of coins spilled out onto the sidewalk. Obvious, with the link between money and the bank, but this concept allowed us to illustrate the history, identity, and location on the faces of the coins. When you walk across the mural, you discover dates ranging from 1906 to 2006, large drawings of real coins, and our own unique versions of commemorative coins—coins that were created just for this project, such as the 1906 Columbia County Courthouse coin shown below.

Normally, I prefer to present hand-sketched designs in colored pencil to clients. We make it clear to them that what they will end up approving is an artist's interpretation and that the drawing and the finished product will not look exactly the same due to differences in the surfaces, pigments, and scale. But I typically find this better than using photographs as proposals, since people tend to believe what they see and they expect the finished work to be true to the photo. In this case, however, photographs in Adobe Photoshop were the perfect choice. Why draw all of those coins when their images already exist? Close-up photos of the coins were digitally cut and pasted onto the scale drawing. When committee debates called for changes, images could easily be moved, added, or deleted. A total of seven different coins were finally chosen.

Public art or civic projects differ from most decorative concrete jobs--public art takes much more time because of the number of people involved. The process is "art by committee." It took nearly four months to get an approved design.

Some of the students who were on the original concept team were hired to assist in the execution of the project. Scotland Stout, SAU art professor and Ann Downs, painter and owner of Blue Moon Gallery, were two of the professional artists chosen for the job. Some of the members of our crew consisted of SAU Art majors, community artists, and the wife of the bank president. What would have taken me 2 1/2 weeks was accomplished by this team in five days. One of the more interesting challenges was to keep all the artists consistent in style regardless of their individual techniques. Ann used a computer to zoom in on the digital photos to check the architectural details before she began.

The existing concrete slab was fiber reinforced and had a "hairy" surface. First, then, we burned off the excess fiber. 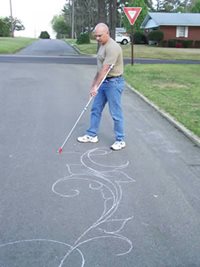 Gerald Taylor's patented Quick Draw Design and Layout Tool holds up to eight pieces of chalk that are dispensed with the push of a button for freehand drawing. Mounted on a compass beam, it allows the drawing of circles or arcs on walls, ceilings, and floors from a standing position. QD aids artists in perspective drawing and contractors who are trying to give clients an idea for a design or are drawing a simple border without the fatigue of bending over. In the freehand drawing mode it can be used in various lengths from 4 inches to 7.5 feet. With the addition of a Pearl Abrasives grinder, circles and arcs from 1 to 14 feet in diameter can be scored. By attaching a dust vacuum shroud, it becomes almost dust free. Gerald recently demonstrated the QuickDraw at The Stamp Store in Oklahoma City.

The contraction joints served as grids that helped with the alignment and transfer of the design. Perfect concentric circles were cut with the aid of the "Quick Draw" tool, which was invented by Gerald Taylor of Images in Concrete (see sidebar). The circles we cut were between five and seven feet in diameter. Gerald scored lines with a diamond blade crack-chaser. He normally wears gloves as a part of his safety apparel but refers to them only as "early detection devices."

The art students and professional artists then used large printouts of the coins to reference the details while painting. Smith Color Floor water-based stains were used for the entire job. An opaque white and dark chocolate were the two main colors that modeled the lights and darks to create the 3-D effect of a shallow relief. Then, metallic copper and silver pigments were rolled over the top to obtain the illusion of these giant metal coins.

To seal off the job, three layers of Flexmar's two-part polyurea were rolled on with H&C Shark Grip slip-resistant additive added for safety. One of the last steps we took was to provide a maintenance schedule to the final invoice.

Throughout the entire job, photographs and video clips were shot. The photos were edited and burned to CDs and the video was produced into a six-minute documentary. Although this is time consuming, everyone involved received a copy that they are welcome to use in any way they see fit. For us, at Images in Concrete, the CD and the documentary become part of our portfolio that are used in civic presentations, professional publications, and future public art proposals. Remember to acquire model and property releases in order to make the most of this kind of documentation.

Over the past few years, Gerald Taylor and I have promoted the partnership of artists and contractors working together. One of the easiest ways to get started is to incorporate small accent designs within larger projects. Seek out professional artists in your community and discuss the possibilities. You will be able to elevate the level of excitement and importance of the overall projects with the addition of site-specific original design. You and the artist can continue to focus on what each of you does best and with products such as Smith Paints, there is no learning curve for professional artists. Even though the product is designed and calibrated for concrete, the numerous possibilities of application are consistent with other fine art painting processes.

Steven Ochs is an art professor at Southern Arkansas University and an artist/designer for Images in Concrete. He has served as a guest speaker and demonstrator for the World of Concrete since 2005.