Tom Ralston has always enjoyed a good challenge. Born into a concrete family, he's been involved in the range of projects that are staples of the industry — swimming pool decks, driveways, patios, and the like. So when he was asked to produce concrete that emits the look and feel of the ocean, he dove in headfirst.

"It's our theme to provide a bit of uniqueness to every project we do," Ralston said.

Ralston is at the company's helm, following in the footsteps of his father and grandfather, Wilbur Thomas Ralston, who founded the company in 1928. Tom Ralston has been involved in the Santa Cruz, California-based company since 1964, taking control of the company when his father, Jim, retired in 1989. 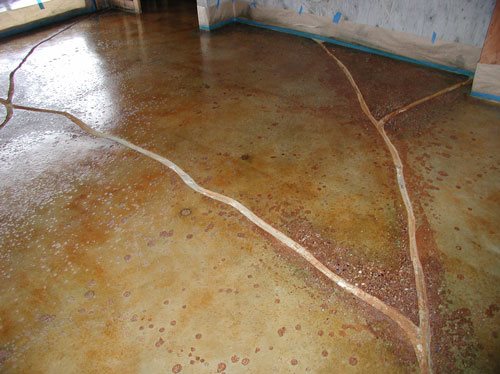 "I was going to hang it up. I was getting bored with it," Ralston said, reflecting on that period in the 1980s.

But his involvement in the concrete work of an old Victorian house prompted him to think about concrete in a whole new light. The work involved great attention to detail and clean design elements — both of which intrigued him immensely.

"It sparked and piqued my whole interest in a new way," he said.

Soon after the Victorian house job, Ralston's interest expanded to stamping, and then acid staining, and then structural work.

While Ralston genuinely developed interests in the various types of concrete projects, diversifying his skills was also a product of good business.

"When the recession hit in the early 90s, I took the philosophy if I did many things, I could keep busy," he said.

By the late 90s, he branched out into blending concrete with flagstone, brick, and pavers.

His talents were put to the test recently when designer Dennis Briton of Carmel asked for Ralstons' help on a Pleasure Point home.

Briton wanted the floors to look as if they had been worn and weathered by the ocean. Beach glass — found at a rockery that had collected the glass from Bodega Bay, up the coast — and aquarium sand and seashells accented the floor. 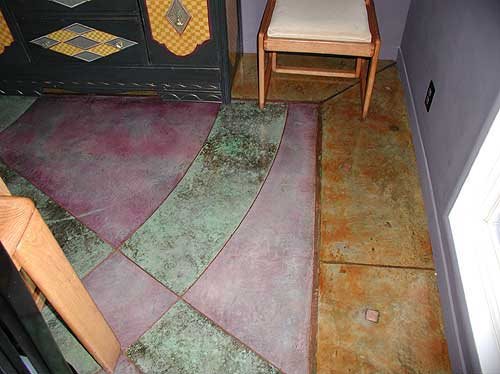 Ralston also wanted to achieve those little holes that are so prominent along a cliff's edge. So, he used a retardant that takes away about one-eighth of an inch of the concrete's surface. He used a turkey baster to shoot out random "holes."

In addition, he wanted the ocean floors to possess the "veins" look worn by a matured seashore. To do this, Ralston used his ocean effects — beach glass, aquarium sand, and seashells — and employed multiple acid stains. Some of the work was applied with an artist's brush to get into the very small holes with a darker acid.

"We also used pieces of foam to get a crack-like appearance," Ralston said.

The result is harmony with the coastal environment in which the home becomes one with the ocean with the sound of the crashing waves complementing the jewel-filled and sea-worn floors. 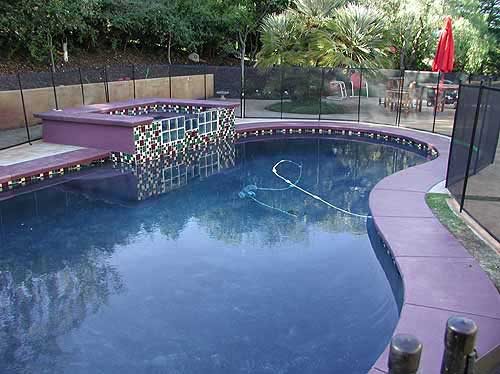 Like the ocean project, most of the company's business comes from residential improvements.

"People are staying put in their homes and they're upgrading," Ralston said.

Ralston, who started creating concrete countertops in the early '90s, recognizes that they're catching on now. However, he says he's started slacking off on countertops because, for him, they're "more trouble than they're worth."

One of what Ralston considers to be his most unique interior projects is the use of purple colloidal dyes from amber, fern green and terra cotta acid stains.

Pieces of copper were placed in the floor and liquid copper was placed in the deep score joints. An Italian stone interspersed with a black acid stain made up the masonry. 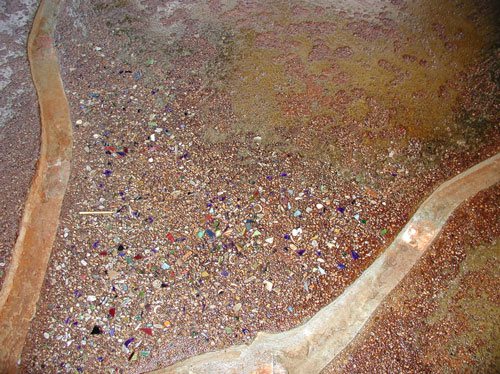 The company has also had its share of other interesting endeavors, including the creation of a bocce ball court constructed with old Italian techniques and materials including crushed oyster flower. Or the Shaffer Park shot put pit, poured with a white base concrete with green and red polymer concrete poured 3/8th of an inch thick for accent colors. Or the ever-impressive chess board in Soquel, Calif.

It's Ralston's broad range of talent and knowledge that have earned him the recent title of instructor.

He conducted a seminar on acid staining in Dallas in December last year. And he will be a speaker at CONEXPO in Las Vegas in March and at the Decorative Concrete Council spring event in April in Oklahoma City.

"I enjoy teaching and training and helping others further their creative energies," Ralston said. "I'm becoming less and less guarded. I'm finding that the more I share, the more that comes back to me."

In addition to teaching others, there are plenty of projects on the horizon, including one involving walls with wavy, snake-like designs that will be achieved by pouring concrete into foam blocks, among other special techniques.

"It will have a serpentine look, but will be structural." Ralston said.

And, in keeping with the company's mantra of maintaining a broad range of unique projects, another project in the works involves a straw bale house.

With the company thriving — there are more than 60 employees, two masonry divisions and a showroom — Ralston has assumed the role of idea guru. Although he's proud to have produced some of the most unique concrete work around, especially the ocean project — he's still always surfing for new ideas.

"I'm constantly bringing in new hardscape ideas," he said. "I want to continue that unique flavor."