By Michele Dawson, The Concrete Network

After spending 25 years in his family's floor covering business, Jeffrey Grieve reached the point where he wanted to do something different. Concrete fit the bill to a T. It catapulted him to new ground as one of the leading decorative concrete specialists in Southern California and leaving hundreds of clients floored when they see their boring gray concrete floors transformed into innovative designs and vibrant colors. 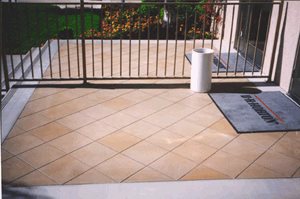 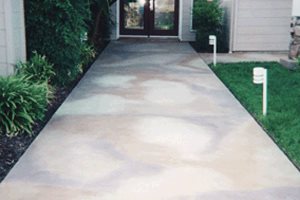 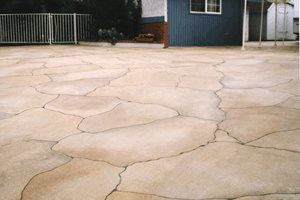 The system is very distinctive in that grout lines are cut into the concrete to achieve different looks — tile, brick, stone, and geometric patterns. He's even done marbleized patina, marbleized blocks, flagstone designs, and diagonal pavers.

Back when he entered the realm of decorative concrete, Grieve was inspired to combine his tile and flooring experience with the exciting potential of concrete.

"Ten years ago no one was doing decorative concrete," he said.

He started developing a formula for a staining system. And over the past decade one thing has led to another, including a thriving business.

The scoring element of Concrete Art is accomplished with diamond blades and with other tools that he developed. The coloring process is also unique, because it is not a paint or coating product, but a concrete staining system that is effective, permanent, and economical.

Grieve gets a lot of commercial work, primarily from landscape architects.

"Jeff's consistent effort in matching existing stone and brick paving colors and textures has substantially lowered construction costs and has won us praise from those clients for being innovative, creative and cost effective," Di Lallo said.

Grieve also has a great reputation among homebuilders and developers. In fact, one of his best clients is homebuilder D.R. Horton. Grieve does about 12 to 14 model complexes for the company each year.

Another residential client is the Tucson division of Kaufman and Broad, which has used the Concrete Art process for the past five years.

Division president John H. Bremond said he has used the Concrete Art system in a variety of ways. Sometimes it serves as a topical treatment to repair discolored concrete stained during the course of construction. Sometimes it provides a decorative finish for exterior concrete in model homes. And sometimes it is offered as an option for new-home buyers.

But come this summer, Grieve will have his sights set on his largest project to date — taking part in the renovation of Southern California's Metrolink, the region's commuter rail service. While most of the $236 million project is centered on expanding services, some $25 million is earmarked for rehabilitation and renovation, which is where Grieve and his company come into the picture; they will ultimately design some 30,000 square feet of the Ontario station with Concrete Art.

The job, which begins in June, will be Concrete Art's largest — in terms of size and profile — to date.

Concrete Art will also be embellishing a new 12-foot-wide pedestrian/bike path at a park in the Diamond Bar area of Southern California. The one-mile-long path will incorporate diamond-pattern scoring and staining. One half of the path is for pedestrians; the other half is for cyclists. Each side will have their own pattern.

Grieve estimates his clientele is equally split between residential and commercial. He's popular among pool contractors — he creates more than 100 pool decks a year, he said.

While Concrete Art's pool decks continue to splash up sales, Grieve is also know for his creativity and ability to produce artistic, one-of-a-kind projects. 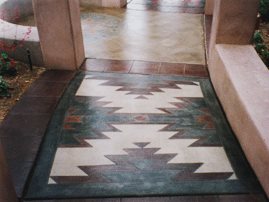 The best example is Grieve's "Navajo rug" project, a floor he created six years ago in one of the interior areas of the Living Desert Park in Palm Desert.

Initially the landscape architect involved in the project was going to install Southwestern-colored tiles to create a 6-by-nine-foot Navajo rug. Grieve presented the option of using his scoring and staining concrete system and ultimately got the job and created three "rugs."

The project made the pages of Sunset magazine in 1999. It also saved the contractor thousands of dollars that would have spent had tile been the chosen medium, Grieve said.

"It was our first signature job," Grieve said.

Grieve said there wasn't anything particularly difficult about making the rug; it just involved a lot of detail work.

Meanwhile, as Grieve gears up for his Metrolink project next month, he'll simultaneously work on getting the company's name out, especially to homeowners who crave a new floor and are tired of the standard alternatives.

He said the Internet has played a large role in expanding the business to what it is today.

"I've gotten a huge number of responses from our web site," said Grieve, who readily admits he's much more businessman than artist.

And although he's been in the business for almost 10 years, he says some things about the industry surprise him.

"I'm shocked about how little knowledge there is about finishing techniques," said Grieve, who has experimented endlessly to come up with a thorough staining process.

And what's next for Concrete Art?

Grieve is intent on crossing the state line and expanding his company into Arizona, a move he views as a symbolic beginning for his company and the decorative concrete industry in general.

"Concrete is a real growth industry," Grieve said. "It's going to be huge."