From Butterflies to Dairy Barns, South Dakota Company Does It All by Michele Dawson, The Concrete Network

What do butterflies, iguanas, eagles, 10-story hotels, water parks, and dairy barns all have in common? They each represent one of the myriad concrete creations crafted by Brooks Construction Services.

Brooks Construction, based in Sioux Falls, South Dakota, is a full-service concrete company in the truest sense of the word. 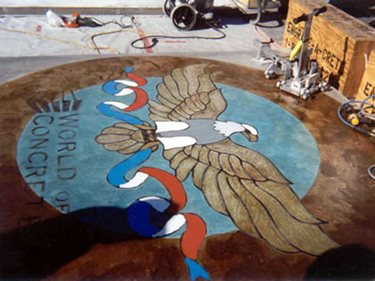 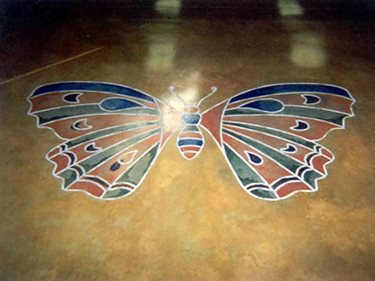 "You name it, we do it," says owner Ray Brooks. "We've done everything."

Brooks owns the company along with John Kleinschmit. Brooks has been overseeing the business for the past 19 years; it originally got off the ground more than 50 years ago. 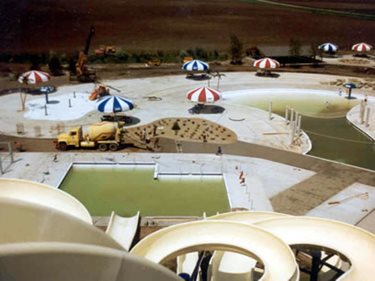 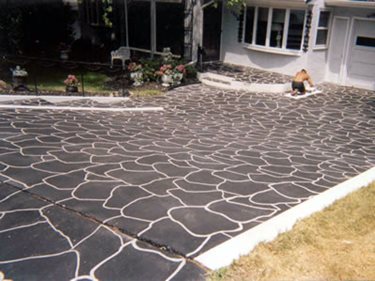 But over the years the company has evolved to meet the growing demand for the decorative concrete projects that are becoming centerpieces of many home remodeling projects — countertops, fireplace surrounds, acid staining, overlays, stamping, and engraving.

"Anything to make new or old concrete look new and exciting," Brooks says on his company web site.

One of the company's best examples of its creative side is the beautiful butterfly floor it created for the Sertoma Butterfly House, an attraction in Sioux Falls that showcases some 600-800 butterflies, featuring dozens of species. The landmark offers special events like weddings and educational programs for children. For Brooks, the high-visibility project required the company to crank up its creative juices — and the result reflects that.

There on the floor to welcome the hordes of visitors is a huge, brilliant butterfly that shines in luscious shades of blue, green and topaz while the background color of the floor that is a crisp brownish-amber with hints of blue and green.

Brooks Construction also created an impressive American Bald Eagle, emblazoned in a red, white, and blue ribbon, which was displayed at a World of Concrete show.

The company boasts eight crews — 56 employees. It's an impressive-sized company, but is running lean compared to its heyday three decades ago.

"In the late 1970s we had more than 100," says Brooks. "But now there are so many competitors. A lot of our own guys have gone off on their own and formed their own companies. Every day someone new is starting up."

Another factor that plays into fewer employees is the difficulty in finding good ones.

"One of the biggest changes over the years is that you can't get help these days," he says

Because the current economy is on the soft side, about 80 percent of the company's work is residential. It used to be about an even 50 percent split between residential and the more lucrative commercial jobs.

"In the winters we can't do anything; the winds can be just ferocious," he says. "We have to do it in the few weeks of summer."

And summers are often filled with swimming pool deck and water feature projects.

"We do pool decks with stamped overlays," Brooks says.

The company is also the proud name behind two large swimming pool projects, which include extensive water slides at a local water park.

But when it comes to the residential work, Brooks is confident that the decorative concrete craze will continue to grow and prove to be a mainstay of the business.

"Decorative concrete is very popular — the coloring, the stamping, the antiquing," he says. "It's a whole new world."

For his engraving projects Brooks uses Engrave-A-Crete, which involves the use of special tools and equipment to cut patterns and designs into existing concrete. Unlike toppings or overlays, engraving is a permanent treatment that won't wear away or lose bond because the patterns are carved into the concrete rather than applied on top of it. When staining enhances the concrete, the decorative possibilities are truly spectacular.

The Engrave-A-Crete process changes the color of the concrete, and then the pattern is actually engraved (scored, cut, or sawed) into the hard concrete with their specially designed patented machine. Concrete of any age can be made to look like glossy polished marble tile, dull old clay bricks, flagstone or rustic cobblestone with a long history. Engrave-A-Crete, used on both interior and exterior floors, is not a topping, coating, overlay, stamped, or sandblasting treatment.

As Brooks Construction continues to become immersed in decorative concrete projects, the company continues to do traditional concrete work, like the post-tensioned floors it created for the local 10-story Sheraton Hotel.

Post-tensioned slabs involve the application of tension to a tendon cast in hardened concrete, then anchoring the stretched tendon at the member ends, producing compressive stress in concrete which improves the response of a member or structure to loading.

But it's not at hotels but back at home where Brooks expects business to boom.

As homeowners become aware of the multi-faceted potentials of decorative concrete, Brooks expects major growth in that niche market.

And they want this fabulous material that can be colored, shaped, patterned, and textured to blend in or complement any design style or theme. They also are coming to appreciate the fact that if concrete is a part of their décor, then they are guaranteed something unique, they're not just mimicking their neighbors.