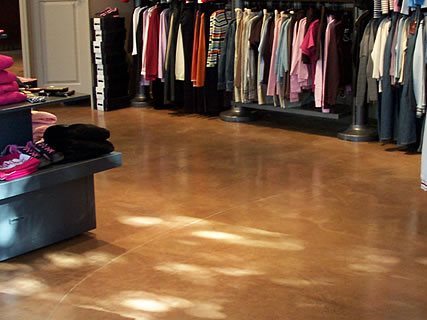 Doug Armitage, owner of General Concrete Finishers in Moose Jaw, Saskatchewan, has been in the concrete business since 1976,doing mainly small residential concrete sidewalks, driveways and patios. Two years later, the company expanded into the commercial end of concrete finishing and cementitious overlays.

"We started out doing patios and small pouring jobs, then as the years went on we got into more decorative work," Armitage explains, adding that he has always kept up with the fast-growing industry.

General Concrete Finishers has been stamping concrete for the past 10 years, and just recently added overlays and staining to their ever-expanding portfolio. 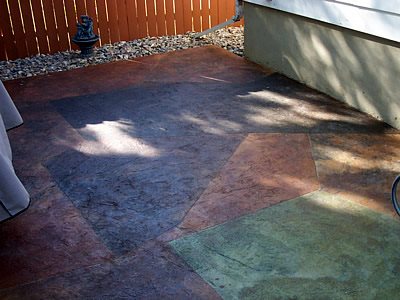 "I always try to be on top of the industry and up with what's new," says Armitage, "so when I heard about decorative concrete, I started researching it on the Internet and found out how to do it."

"I was doing exposed aggregate in the '80s, borders and stamps in the '90s, and now overlays and stains," he adds. "I'm always keeping up with what's out there."

In addition to selling epoxies and sealers, General Concrete Finishers specializes in commercial and residential floor systems, including in-floor (radiant) heat, as well as concrete driveways and patios with a light broom finish, bordered out with exposed aggregate. 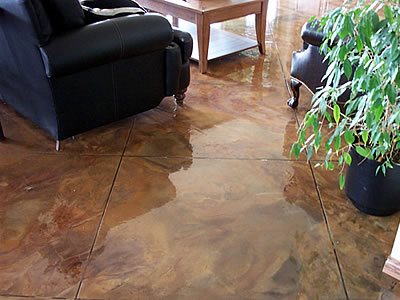 The company currently offers a bevy of services: colored concrete, demolition, concrete driveways, interior floors, patios, pool decking, staining, stamping, overlays and saw cutting. But, as Armitage has explained, he's always on the lookout for new techniques and applications, so the list is ever-growing.

Although they mainly work in a 50-mile radius of Moose Jaw, the company has been known to travel as far away as Calgary, about 400 miles to the west, where they did a floor overlay for a lake-front home.

And when a recent customer was looking for something different for his driveway, General Concrete Finishers got inspiration from the Southwest. "We drew up an 8-foot by 10-foot sunburst, formed it all and placed it. Then we stamped the driveway, stained it and created borders in the same color as the sunburst," recalls Armitage of the project. 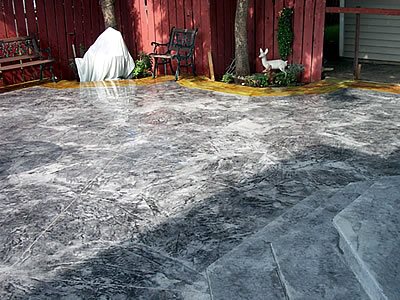 For Clothes Ensemble, a clothing store in Moose Jaw in what used to be an old bank, the owner was specific about wanting flooring colors including cranberry, tan and gold. General Concrete Finishers created a custom color for the owner using a beige overlay and cranberry stain over the top to get the effect they were looking for.

And when General Concrete Finishers was given creative free reign for a residential pool deck, they bordered it out with random stone around the pool and then did a textured mat beyond that.

The colors they used were a golden amber stain and aged buff on top of it. 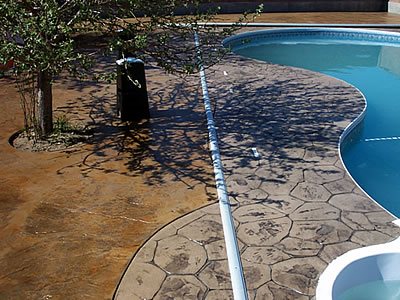 Other notable jobs General Concrete Finishers have done include a border with stamps and exposed inlays for a McDonald's restaurant, and exposed borders for a local Air Force base.

General Concrete Finishers uses both the phone book and the Concrete Network to find customers, and Armitage notes that "People who want this specialty look will go to the Internet and find us that way."

Word of mouth is also effective, especially for residential work, and Armitage says that General Concrete Finishers is well-known in nearby Regina.

"We get replies off our website, and the look we have is what they want," he says of his clientele, adding that "decorative concrete is still fairly new in Canada. We're the last to get stuff." 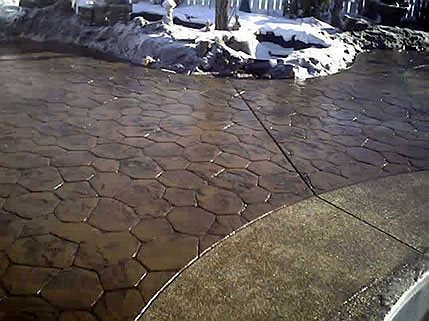 Armitage says one of his goals is to do every job differently. "Overlays vary from contractor to contractor. They're as individual as a fingerprint. Everyone uses a slightly different technique, and because stains are patinas, they [also] vary," he observes.

"Ultimately, we let everyone decide for themselves whether our work is right for them," Armitage concludes. "And we never have a shortage of work."