Everlast Concrete, A Bomanite Franchise Partner in Steger, Illinois, recently used Bomanite products along with its talent and ingenuity to transform an ordinary home into a stunning award-winning work of art. More than 6,000 square feet of Bomanite architectural concrete product went into creating a concrete living environment unlike any other. The end result included a prestigious award from Bomanite Corporation for Everlast Concrete in 2004.

The home, owned by Vince Schrementi (who also owns Everlast Concrete), brilliantly exhibits the way different products, such as Bomanite Thin-Set, Micro-Top®, and Patène Artectura can be used in conjunction with many different patterns, colors and styles, yet still create a harmonious environment. Patène Artectura stains were instrumental in creating unity among the diverse styles in the home. Because they were applied on nearly every surface, they not only infused each room with color, but also provided a smooth transition between unique spaces.

Custom design on the creative foyer floor of the home of Vince Schrementi, owner of Everlast Concrete.

"It's the Flintstones meets the Jetsons in the entryway," laughs Schrementi. "I started out with a house built with ICF formers, and I thought I would just do some stained concrete on the inside floors and it just morphed into micro tops with intricate designs...when I do something like that type of a thing, especially for myself, I like the idea of having some meaning behind the art. I think it just has a deeper sense of value, if for no one else than me."

The three-years-and-counting-project uses Bomanite Thin-Set, a specially formulated polymer topping that is normally installed at a thickness of 3/8 inches, was used in traditional ways, as well as taken to a whole new level of design when it was troweled in layers on a wall. Several different Bomanite patterns, as well as some custom designed ones, were imprinted on the layers to depict the natural strata that occur in the Earth. The floor, which weaves itself from the entryway all around the home into the kitchen, was stamped and colored to look like stone. Even the design on the door, made to resemble a rising sun, was made from marrying products by Bomanite with an original installation technique. 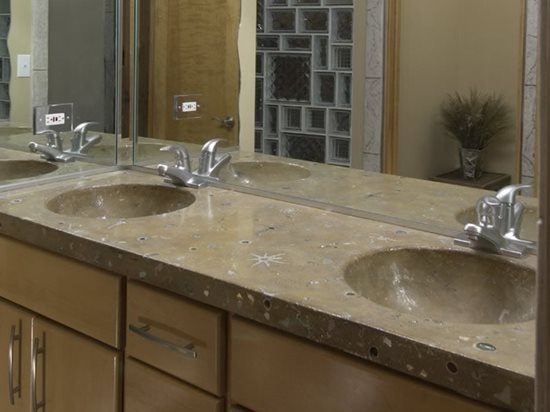 Pieces of metal, glass and mirror were embedded in this concrete countertop surface.

Bomanite Micro-Top, a paper-thin cementious material that tenaciously bonds to almost any stable substrate, was used to express Schrementi's creative vision in a custom design on the exquisite foyer floor. To the naked eye, the original design simply resembles the ancient symbols for yin and yang, surrounded by multiple circles. In fact, Schrementi used concrete to convey a much more sentimental meaning. Each family member was assigned his or her own unique color. The two overlapping circles, one white, one copper, represent Schrementi and his wife. Where these two intersect, another circle is formed. In it are the symbols for yin and yang, which represent their two children. Each side is colored using the two colors in the parent's circles, mixed with each individual child's own color, representing the intricate family bond.

Bomanite Micro-Top also proved to be the perfect medium for troweling on the walls of a shower stall before becoming a canvas for a bold, colorful mosaic. The countertop in the bath is an example of cast-in-place mastery. 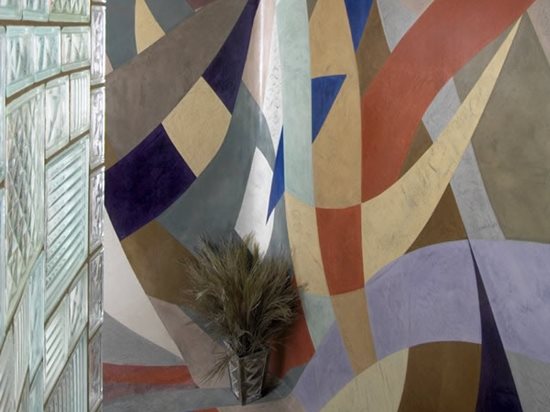 Geometric shapes combine to create this stunning wall made from concrete.

Bomanite is installed worldwide only by an exclusive network of highly trained and skilled Franchise Partners.More than just contractors, Bomanite Franchise Partners are artisans and visionaries. Schrementi, who has been with Bomanite for over 11 years and in the industry itself for well over two decades, says he sought out the company.

Schrementi explains, "By joining Bomanite, it enabled me to rub elbows with people that had been doing stamped concrete for 35 to 40 years." 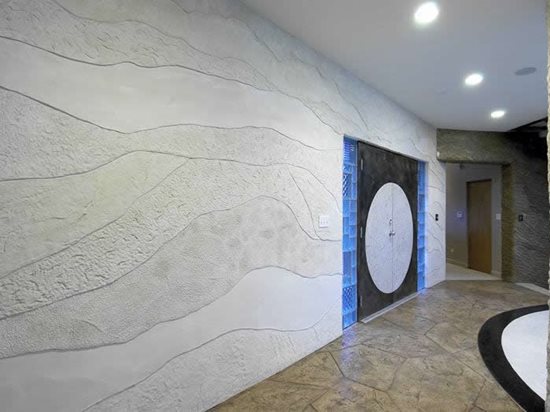 On the commercial side, Schrementi observes, "I think the architects are getting more comfortable in this area with stamped concrete and they're specifying it more. As far as residential, we are hoping to push more of the wall treatments...We're also hoping to get into more concrete furniture, tabletops, and things like that."

As for where he gets his ideas, Schrementi says, "I research art shows and different publications. I look at glasswork; I look at metal working things. I [got the idea for] one wall in my house from National Geographic, looking at an aerial shot of rice patties in Thailand. The two would normally have no connection, but I was drawn to the geometric shapes of it, the consistently inconsistent."

"Publications like that give me ideas to build things," Schrementi adds. "I recently went furniture shopping on my property...I went in back with the chainsaw and I cut down an old tree stump, which I'm going to add some concrete [to], test some metal working on, and create a sculptural piece of furniture out of. I'm not really making chairs and coffee tables so much as it is sculptural pieces." We're sure there's plenty more on the horizon.