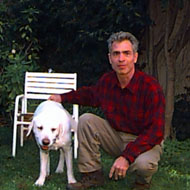 What do pottery and concrete have in common? Not much, unless you're a man named Buddy Rhodes.

For the man considered to be the father of the concrete countertop, pottery was an open window into a new, creative world.

It all started when Rhodes was a student at Alfred University in New York, a school that boasts such noted alums as actor Robert Klein, travel writer Peter Jenkins and spy novelist Robert Littell.

Studying pottery and considering himself to be a functional potter, Rhodes was selling his wares at craft fairs with moderate success.

Who knew one day he would go on to have his concrete work showcased in the nation's top home and design publications including Architectural Digest, Home, Metropolitan Home, Kitchen and Bath, Sunset, Fine Homebuilding, Luxury Kitchens and Baths, Beautiful Baths, and Home Remodeling?

Back then, he dreamed of creating bigger, yet functional, pieces. Fully aware of the limitations of clay (shrinkage, glazing issues, etc.) Rhodes embarked on a journey that lead him to concrete.

He soon discovered that concrete bag mixes contained larger rocks that made the material hard to manipulate. Wanting it to be more malleable like clay, Rhodes set to work experimenting with his own mixes until he struck gold. This new concrete mix could be hand-packed into molds of different sizes and shapes. And once removed from the mold, different surface characteristic could be produced with a trowel.

After he accomplished the desired mix consistency, he set to work. Work that in the beginning included concrete countertops.

When Rhodes began, all of his work was done onsite.

"Onsite requires constant monitoring and checking of the pieces," explains Rhodes regarding why he soon switched from onsite to precast.

"Although I appreciate cast-in-place because it's so direct, in order to grow my business and take on more volume, I had to make the switch. Plus, precast allows for much more quality control," says Rhodes.

But did the switch to precast cause him to sacrifice artistic freedom? Hardly.

And for someone who got his start 20 years ago, Rhodes is still pushing the envelope when it comes to concrete design.

"I keep on experimenting and I do custom jobs which really allow me to cut loose," he says.

"One project leads to another," Rhodes adds. "I have a fire under me now more than ever, and I just try to do my best and not look back."

For Rhodes, part of looking not looking back¾ and looking forward ¾ includes attending the World of Concrete each year, as well as scouring trade magazines such as Concrete Products, Concrete Homes and This Old House.

And Rhodes says he gets inspired daily. Whether driving in his car, drifting off to sleep, or surfing the Internet.

"Often it's the competition that inspires me," Rhodes says. "The great creators out there are the ones that push me. Inspiring artists and craftsmen like Fu-Tung Cheng and the work done by Sonoma Cast Stone, that's what excites me."

Rhodes admits there's still a lot of room in the industry and in his work to grow artistically, and he admits the process of creating is much more exciting to him than the thrill of the finished product.

Recent changes in technology have only improved his creative process. Rhodes can cite three ways his job has improved due to technological advances:

"On the design side, I use more diamond tools for polishing and cutting. On the business side, I now have the Internet to showcase my work, and clients can take a look at my portfolio on my website. I also have the Concrete Network as a go-to for information and I refer many of my clients to it as well," says Rhodes.

As someone who's been around since the beginning of concrete countertops, he credits the growth of the industry to acceptance by a community looking for something new.

"Since more and more people have concrete counters, fireplaces, etc., the demand is literally pushing our industry," Rhodes says.

But the most common projects Rhodes encounters are kitchens and baths, which include vanity tops, kitchen counters and islands, table tops, custom cast sinks and tubs, shower basins, back splashes, and tiles for floors and walls. He says kitchen counters still exceed all other residential fabrication orders.

With residential projects making up about half of his workload, Rhodes also cites an impressive commercial client list including more than 60 Pottery Barn stores throughout the United States and Canada, more than 30 Illuminations sites, a retail store at the Venetian Hotel in Las Vegas, Jamba Juice, Levi's, NBA Store in New York, Bath and Beyond, Bank of America, and Apple Computers, Inc.

Looking ahead, Rhodes wants to get his concrete mix more readily available to contractors by getting it distributed to contracting supply companies.

He says he's witnessed a big interest in the mix, partly due to two of its unique properties ¾ the white mix can easily be colored and it's also made out of 30 percent recycled materials.

"I'd also like to grow as a business and get my quality control up there by spending more and more time on each project," Rhodes says.

Keeping an eye on the future is just one of the many things that has helped Rhodes stand apart from his peers and rise to the top.