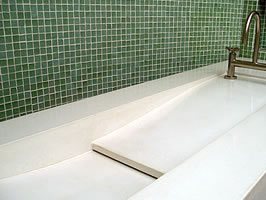 Seven years ago, Craig Smith put his business background t o work and started DEX Studios in Atlanta, Georgia. With a grass-roots effort, the company started with a wheelbarrow and mixer in his garage.

The company, which incorporated in 2000, started out focusing solely on concrete countertops under the direction of Smith and his wife, Lauriel Leonard, who is an interior designer. Today Smith, Leonard, and their work, can be seen on HGTV's "Kitchen Trends" and in numerous design and architectural publications.

One of the first advertisers with The Concrete Network, DEX grew rapidly, expanding from a 400- to 7,500- to 35,000-square-foot production and showroom facility before adding another 30,000-square-feet in December 2002, for a total of 65,000 square feet of production, showroom and warehouse space (the company offers national shipping, as only a percentage of their work is local).

"We needed the space because we work on many large-scale projects, and we have a broad production line," explains Smith of the move to acquire the larger facility. "We do a large volume of production-oriented work. It also allows us to completely assemble large custom projects, such as commercial bar tops for test fitting."

Their work also includes concrete countertops, sinks (vessel and integral), fireplace surrounds, tabletops, cast bathtubs, tiles, furnishings and advanced custom design capabilities. All DEX Studios products are precast in the studio in a controlled environment that assures both the quality as well as the artistry of each piece. 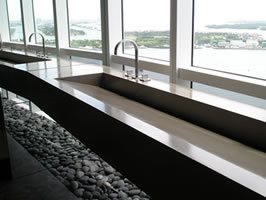 Because DEX Studios offers several finish and texture options and a palette of colors to choose from, the finished product is often a one-of-a-kind piece as individual as each client.

As a self-proclaimed design-driven company, it's no surprise that DEX works primarily with architects and designers, such as Angela Adams (furnishings), Clodagh (product design), and Ann Sacks (fine tile, stone and plumbing) crafting production lines including sinks, bathtubs and tile for the companies. 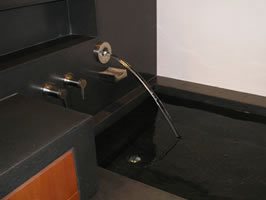 Smith says being a manufacturer for designers has its advantages. "We work with designers because they know what they want," he notes, adding that they still offer custom work.

With a rapidly-expanding standard line of products, Smith says DEX is designed to make numerous pieces, and they're capable of large volume.

And that's where his relationships in the architectural trade come in to play.

"We're lucky to work with Ann Sacks and PierceMartin (furnishings)," he says. "Both helped establish our reputation...we grew from there. Each time we got calls from industry leaders, we responded with good product."

As for the direction the business has traveled, Smith says everything happened for a reason.

"The transition into tabletops and bar tops was simple," he explains. "Sinks followed immediately and the line grew rapidly—with this product we can be very creative. If you build it they will come. Once a customer sees [our concrete sinks] they love them."

DEX sells a line of tabletops through PierceMartin, an international importer of furnishings that sells only to the interior design industry. The tables are successful because, as Smith says, "Concrete works well with other mediums like metal and wood." 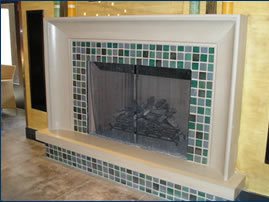 The designers and architects who choose to work with DEX are all fans of the urban and modern look created by the company. "Our strength lies in the fact that DEX offers polished concrete, and terrazzo finishes in the full DEX product line," adds Smith. "We have even produced curvilinear s-shaped vertical walls out of cobalt glass terrazzo."

"Our look is different from others, and our finishes distinguish us," concludes Smith. "[Our] modern aesthetic is a conscious decision."

Undoubtedly, one that their clients appreciate.