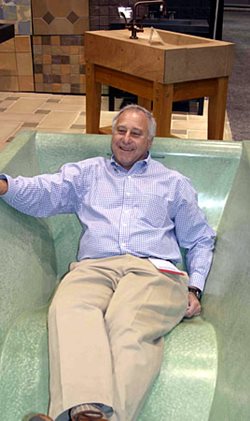 Steve Rosenblatt, owner of Sonoma Cast Stone located in Sonoma, Calif., is the exclusive manufacturer of NuCreteTM and helms a rapidly-growing company of artisans and technical staff, who combine their talents to design and build beautiful and functional cast concrete products. They recently expanded their factory to accommodate the growing market for their innovative cast concrete products.

Inspired by Arts & Crafts design and handcrafted in concrete, Sonoma Cast Stone bath sinks are available in both custom and 24 standard colors. Their SoftStone concrete pavers have the appearance of aged stone, and their TumbleTiles offer irregular edges and are available in a blend of four colors or any colors by request. Their exclusive hand-cast product line includes vessel sinks, tiles, pavers and counter tiles. They also offer custom surfaces and products such as countertops, fireplace surroundings and integral sinks.

1. Estimating
Sonoma Cast Stone's portfolio consists of about 60 percent custom work, according to Rosenblatt. Which means they do a lot of estimating, and have three employees dedicated to the task (one of whom even specializes in commercial projects exclusively, with the other two working on high-end residential project estimating).

Rosenblatt says they use a custom version of Quickbooks, which ties in to the company's accounting program to make things easier for everyone.

"Everything is given a part number," he explains. "Then we look at who the customer is." Rosenblatt adds that direct customers are billed one price, while dealers get a discount.

To round out an estimate, Rosenblatt says every job has a bar code, and when someone works on that job, they scan in their name, the job number and whatever function they are performing (such as layout or casting, for instance).

All of this information gives Rosenblatt and his team a picture of what costs to attribute to a job, which he says helps refine their estimating skills over time.

"We look at our competition, which is almost never concrete (just other surfaces such as granite or stainless steel), then we price our product at a premium to that material," explains Rosenblatt. "It's usually 15 to 20 percent higher than comparable work in granite."

He says they also price based on exclusivity. For example, a complex kitchen using pieces like their Chef Sink would be quite expensive (the Chef Sink alone runs about $10,000).

And with the invention on NuCrete, the company is also playing with price increases, feeling for how far up they can go.

"Most people are happy to pay extra for NuCrete," Rosenblatt says. "Right now, we think we're the only concrete in the world that's stain proof, and that exclusivity adds to the price."

3. Marketing/advertising
Sonoma Cast Stone employs several different marketing tactics, such as hiring a public relations firm, which garnered the company exposure in almost 100 publications last year alone. They also have advertising on Google, and place some regional and national ads in publications.

Sonoma Cast Stone features their products in places such as Sunset House, Parade of Homes and Designer Showcases.

The company is also an exhibitor in several prominent trade shows, including the Boutique Hotel show coming up in Miami, as well as the National Restaurant Association, Kitchen and Bath, and the Pacific Coast Builders Conference (PCBC). And, of course, World of Concrete.

Rosenblatt says they also use a fair amount of direct email (the next wave of direct mail), and recently sent out a press kit to a few hundred journalists. The press kit, or "mess" kit, as they called it, contained a coffee coaster made from NuCrete, as well as small bottles of red wine, ketchup, Tabasco, olive oil and a lemon. The mess kit also contained a few story angles about the NuCrete product, and encouragement to use the contained items to attempt to stain the concrete coaster.

"We had fun with it," Rosenblatt laughs. "Something like that may take years to get press, but it was fun to do."

In addition, all of Sonoma Cast Stone products are packaged with the company logo, which was recently changed to include NuCrete. They also have the trademark on several terms including "vessel sink" and "ramp sink".

4. Vendors/suppliers
Rosenblatt says he's learned to be cautious after a few problems with materials.

"We used to store everything outside," he says, "but when we got a bad batch of sand, we never knew if it was because it came that way from the supplier, or it was bad because it was stored outside."

Not only does Sonoma Cast Stone now have a larger facility in which they can store everything, but they also test all of their materials immediately upon receipt.

"We conduct rigorous testing of raw materials now," he adds.

As for the materials Sonoma Cast Stone uses, Rosenblatt says those have also changed.

"We've reformulated our products to use ingredients available everywhere," he explains, adding that he hopes to open other plants across the country, and that will make things easier.

5. Dealers
Because Rosenblatt says dealers can be wonderful or they can be terrible, Sonoma Cast Stone has created an A and B list of their dealers. On the A list are those dealers who are trying hard, asking for help, following directions and in the end succeeding. On the B list are those who are not.

"We've given the B list until January to improve or we end the relationship," says Rosenblatt. "NuCrete puts us in a different category, and they should be able to charge more for that and do well."

"We have an established list of certified installers, and we've also created templating kits with simple instructions," explains Rosenblatt. "It's proven to be good. We've also learned how to communicatehow to spot problems and ask the right questions to get [installers] where they need to go."

One is the direct buyer, who is in many instances unaware of the nuances of decorative concrete and is shocked by the pricing and delivery dates (they call today and need it tomorrow).

Next is the professionalmostly knowledgeable contractors, architects, designers and the like, who can get to the heart of the problem immediately and have realistic expectations.

And lastly are the dealers, who must put up a fair amount of money to show products and come to Sonoma Cast Stone because their customer is looking for specific products.

8. Employees
Sonoma Cast Stone pays their employees more than their competitors, according to Rosenblatt.

"We've kept most of our crew since the beginning," he says, "and they're very, very good. They've developed skills way beyond what they had in the beginning."

Rosenblatt says he goes out of his way to treat his employees well, because he values their contributions both as individuals and employees.

9. Love what you do
In the end, much of the success of Sonoma Cast Stone can probably be credited to the passion Rosenblatt and his group has for their work.

"We love what we do," he says. "You can do so much with concrete. It's a wonderful material and it's fun selling it. We even do plant tours, and people are awestruck by what we're doing with 'sidewalks.' It's very exciting."

From exclusive products, to valued employees, to loving what they do, Sonoma Cast Stone is helping the decorative concrete industry succeed in style.